Gadria, the world's greatest dungeon. Legends tell of a treasure of unimaginable value that awaits those who reach the final level. Lead 99 powerful Champions, each with his or her unique powers, into the dungeon's depths and unravel its deepest secret.


Please note the Demo has only 27 levels and 27 champions, as well as limited items and monsters. 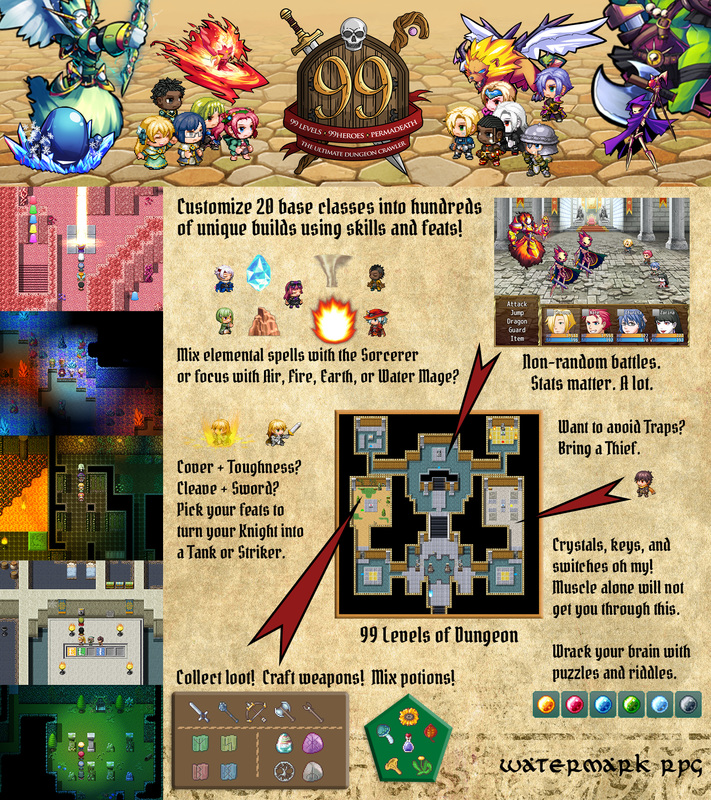 Back to the Shop. For now.

Hey everyone. 99 is being taken back to the shop for some major redesigns. This game may go in a completely new direction.

So for now, downloads have been temporarily suspended until we figure out where all this is going.

Don't worry, the game'll be back. Follow the game to keep up with our progress. :)

99 Dungeon: A dangerous tryst through the Midnight Garden.

Upgrade the camp to get better equipment and perks.

Close
10/25/2016 04:59 PM
On floor 14, Hall of Mirrors I think it's called, when I finally got to the yellow lever, I was stuck in that room with no way out! You're trapped in there. None of the mirrors in that room take you anywhere other than another mirror in the same fucking room. Also, why does the Steal skill steal gold as well? Isn't that what Pilfer is for?

And another thing, that whole 'perspective' thing for the sorcerer's lab doesn't make sense. Because no matter how you look at it, the setup I posted & the player's view is in fact the correct perspective. For the left & right to be considered in reverse, that would mean that you're viewing it prom the character's perspective IF they were above it looking downward, which is impossible considering the wall just above all this. It's also not consistent considering that the Earth & Air orb positioning is perfectly fine from the player's perspective, including the Summoning Lesser Demon ritual layout as well. Inconsistent directions like that is just BS!

I'm starting to think that either you're trolling the player on purpose or you completely lack common sense. When making a game, never forget the purpose of the game. A game that feels like a chore to play instead of being fun & enjoyable will never be successful & will just eventually shun most players who try to play it. Like Dragol mentioned in her first post, if this game is the kind that you simply 'Won't make it' in, then no one will ever complete it. They'll just get frustrated & say "Fuck this shit! There are way better games to play or things to do then to put up with this shit!"

I am officially done with this game & will delete it off my computer to free up some space that's better deserved to better games or something. In my first post I mentioned that this could be a learning experience for me. Well, what I've learned is what NOT to do in a 100+ floor dungeon crawler. I hope you learn something from this post as well in regards to how you handle this game's development. Btw, you really shouldn't label the game's version to 1.0 or higher unless it's actually complete. It should've started at 0.1 or something. Anyway, I'm done.
watermark

I am not trolling the player, the game is just designed to be difficult. You are entitled to your opinion. I respectfully disagree. I personally quite like these types of games. I think it's quite fun. Perhaps you and I find different games enjoyable. Like you mentioned you are planning to create a dungeon crawler as well. I am sure you will design it in a way that suits you.

Btw, in the mirror room, it is necessary to get the glasses before you can enter any mirror. The glasses will allow you to escape at any time.
watermark

Close
10/26/2016 01:21 AM
After seeing Indrah's live play it made me realize how slow it took to load the base town on some computers. It doesn't happen on mine so it wasn't noticed till now. It has to do with parallax mapping as that's the only map that uses that. Anyone know of good tips to work around this?

I am thinking I might have to get rid of the current base town and replace it with something else in the next update if there's no good resolution to this...
watermark

Anyway peoples, if you played and liked this game, would someone nominate this for the "Most RTP Game Award" for Misaos? This game uses a lot of RTP if nothing else. :p
OfficialLostSouls
0

On floor 4, I have not been able to figure out how to open the door with the red button behind it.

Are there any hints you can give me to where the solution is?
watermark

As all dungeon floors are randomly ordered after floor 3, please indicate the NAME of the dungeon when you ask a question in the future. Because everyone's floor 4 will be different. In your case, I think the floor you are referring to is Macabre Theatre?

HINT: The two locked doors in this level are controlled by the alphabet tiles in the center. You need to collect 6 alphabet letters scattered throughout. The trick is the center spells TWO words. As indicated by the sign, they have something to do with speaking and mime. One word opens the door to the west, the other to the east.

Open the Hidden Content below if you need the solve:

Show
The two words you need to spell are LISTEN and SILENT. Remember to pull the lever after you spell a word.
watermark

If it's a free script, I was wondering if I could use it for a game that I am making.
watermark

It's really useful. You just gotta tweak it a bit depending on what you want to do with it.
shadowshurt
0

Close
01/02/2017 12:36 AM
So, this may just be a problem I have because my laptop's old and crappy, but ever since the dungeon was changed from being fully lit to having the torches everywhere, the game slows down insanely while going through the dungeon floors.
watermark

Close
01/02/2017 03:10 AM
@shadowshurt Hey thanks for playing! Yes, the game seems to be suffering memory issues with the current version requiring lots of memory.

Hence my thought of redesigning the game with new, smaller maps. This might be the only way to solve this for now. OR maybe we could have an option to turn off the lighting script and make the Dungeons fully lit for some players. Although the lighting makes for a much better experience.
Pages: first prev 12 last