The world is dead, ravaged by the misdeeds of a long-forgotten era. Towering ruins dotting the lands exist as monuments of fallen civilizations. Humanity is divided, sheltered in isolated colonies few and far between. A mysterious energy ravages the world, spawning horrific monstrosities heralding the nigh-extinction of all life on the planet.

Goatchild is a supernaturally-gifted woman with no true name nor any idea of how she came to be. Among the few beings with the power to single-handedly drive back the eternal scourge, her only desire is to survive as long as possible against a threat she can see no end to... until the emergence of a spawn more self-aware than all of its peers.

Goatchild: Advent of Vantelieth is an action game that attempts to blend engaging, bleak storytelling with in-depth combat and plenty of optional content in between. Challenge yourself against imposing foes and unravel the mystery to a never-ending struggle!

Secret's Out Ch. I

With the recent release of patch 1.4 of Goatchild: Nightmare, as well as finally having written an outline of Advent of Vantelieth's story from beginning to end, I've given myself a much clearer direction of how the game should progress in terms of both story and gameplay. This will definitely help me to release updates far more frequently than before once I've finished quite a long list of character sprites to be done. Fingers crossed!

With that said, I intend to speed up the development of Chapter 2 for a release later this year or sometime early next year, if I can manage it with my rather hectic schedule... so I figured now would be a good time to reveal the numerous secrets hidden within the first chapter! Note that this does not cover all minor details and MASSIVE SPOILERS will follow from here; read this at your own peril.

As mentioned previously, badges are achievements awarded to players for accomplishing a difficult task or discovering a well-hidden secret. Some badges are difficult to obtain even should a player know how to obtain it. The six badges hidden in the first chapter are obtained as follows:

Badge of Desperation:
Shoot Watcher during the chase sequence. This is the only instance in which Watcher can be shot without causing a game over.

Badge of the Golden Rat:
DO NOT kill the rat holding the Messenger's Key to obtain said key—interact with it instead. If the rat was spared, a golden rat will immediately spawn in the giant hallway leading to the Garden of Mercy. Kill the rat before it despawns to obtain the badge.

Badge of Garden Silence:
Kill the Garden of Mercy before it finishes its flowery diatribe.

Badge of (????)-in-Hiding: Look around the grassland while fighting the Garden of Mercy. Shoot the hidden enemy to obtain the badge. Note that the Garden of Mercy will teleport the player in front of it should they wander off too far.

An Unforeseen Encounter
There is a hidden cutscene involving a major character in future chapters which takes place in the isolated prison containing the Warden's Key. To trigger it, enter this room BEFORE pushing the button on the dragon statue located in the upper floor. 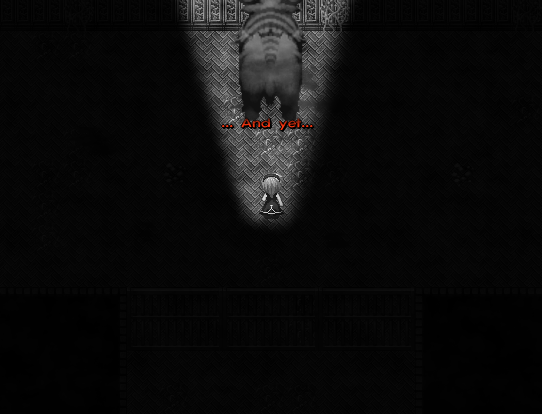 And finally, the hidden boss. To spawn this boss, first be sure to keep the Keeper's Bell in your inventory after ringing all of the bells. After killing all of the Garden of Mercy's minions, look for the Painted Woman in the room located upstairs in the right corner. Give her the Keeper's Bell to obtain Madcow's Regalia. Use the regalia in front of the bars located in the room you obtain the Deliverer's Key. After this, the boss will spawn in the dark room located beyond the left door downstairs of the lowest floor past the library. Stealth is key to winning this battle. Victory will award the player with three Great Essences and a badge depending on the selected difficultly (all of them count towards the same badge).

Stay tuned for additional updates regarding progress of the second chapter and what to expect!
There is a secret boss in the first chapter. This is a hint to locating it.

A new scene to be added with the next Ch. I update before I begin work on Ch. II.

author=Cryum
game says it can't find RGSS202E.dll. I already installed RTP100, so what else am I missing?


I think you need the rtp for rpg maker VX. Try this
Cryum
50

Close
12/28/2016 07:55 AM
I remember a long time ago some game didn't work because I didn't know VX and VXA were different. I just thought people called VXA VX because they were really, really lazy. LOL
Firefly84


Glad I could help.
I will delete this link to the end of the week (year :lol:) so I don't get problems because of copyright or similar.
DanTR

Close
12/29/2016 08:07 PM
I'm stuck on
Show
the battle against the Giant Tree, the one that happens after you walk in the corridor searching for the Watcher. I don't know how to continue - I've tried killing all the infected squirrels, to no avail.
Dragnfly

Close
12/29/2016 11:30 PM
Kill it with guns. It takes a bit. I recommend moving from left to right or right to left for dodging. The best time to strike is when it appears on a higher row than you.
DanTR

author=Dragnfly
Kill it with guns. It takes a bit. I recommend moving from left to right or right to left for dodging. The best time to strike is when it appears on a higher row than you.

Oh my God, I didn't see its health bar xD Thanks anyway
ExodusTribute

author=Firefly84
I think you need the rtp for rpg maker VX.

Wait, the game still requires the RTP to run? Sounds like I dun goofed somewhere...
Bleatloaf author=GoatLoafStudios
If it has goat in the title, I'm in