The previous Annice demo could be completed in 5-10 minutes, and was mainly notable for how little it showed of the game itself. This final demo is similarly short, but now uses its runtime more efficiently, and manages to show some promise for the full release in the future. 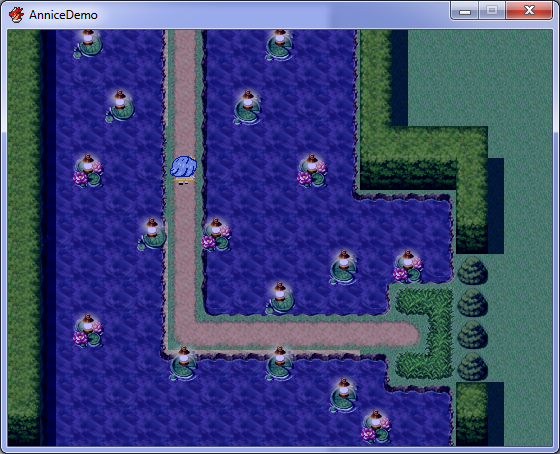 This corridor is still the first map of the game. Thankfully, though, there are now considerably fewer one-tile corridors you have to go through, as the later maps have been redone, with certain scenes taking place in rather different, much nicer-looking locations. Those locations also use a lot more of the game's custom art (which also crops up in the occasional cutscene stills) then the initial, RTP-dominated areas. You can see them under the spoiler tag: I've had to screenshot them all, because while they look good, they are also rife with the passability errors, unfortunately. 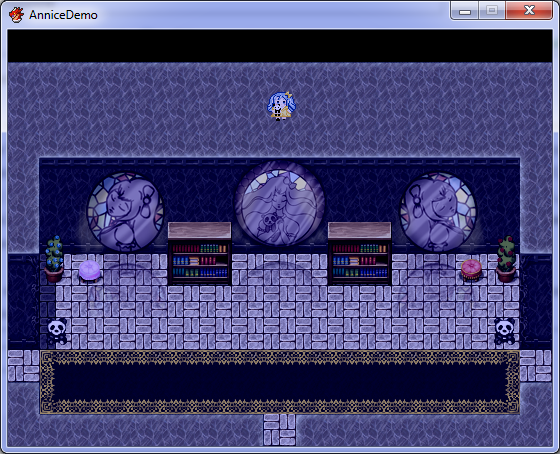 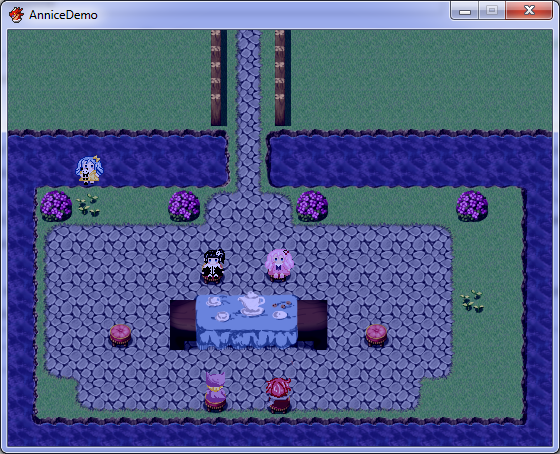 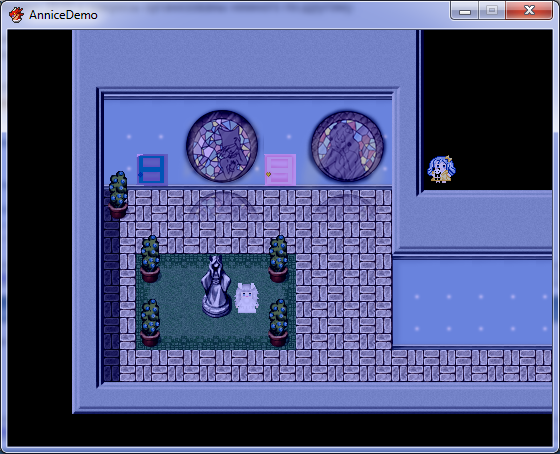 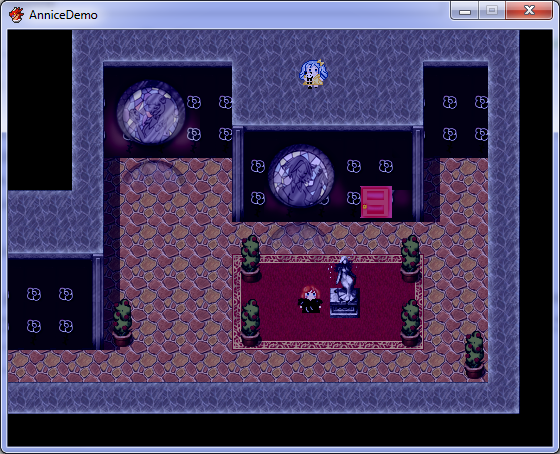 Sound-wise, there's now a footstep sound! Not a very good one though, as it sounds a little harsh for the game's tone, and I would suggest toning it down a little. It's also always as if you're walking on a hard floor, even when moving on earth or grass. For comparison, Jasei No In had a separate sound for softer surfaces. (In fact, perhaps the developer could experiment with taking sounds from that game and see how it would work). Still, I like this progress. Then the initial demo was most notable for being practically silent throughout, all the latter scenes (such as the ones under the spoiler tag) now have their own music, and it's actually pretty good. I do hope the full release would find a theme or two for the earliest scenes, but for now, I'm happy that there is in fact music playing to signify the start of the chase sequence! 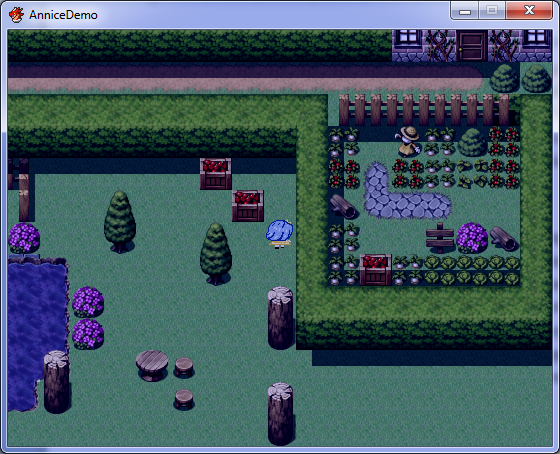 Some weird place with no entrance I just wanted to show here.

There's that chase sequence, and not much else. I've seen an LPer struggle with it, but if you take the time to walk through the maze of hedgerows to know where all the dead ends are before approaching him, then it's no trouble, as our pursuer would quickly fall behind you once you run a ring around the pool in there, and will get trapped in his own hedgerows. The game also promises puzzles later on, but I haven't really encountered those.

Interestingly, you start the game with a single Magic Water, which has a description in untranslated Italian (Recupera 200 PM). You also get an “Elisir” later on, which also has an Italian description (both still unfixed in the current demo). As such, there might even be combat in the full game, though since the in-game menu has no “Skills” or “Status” tab, I’m not entirely sure on that one. 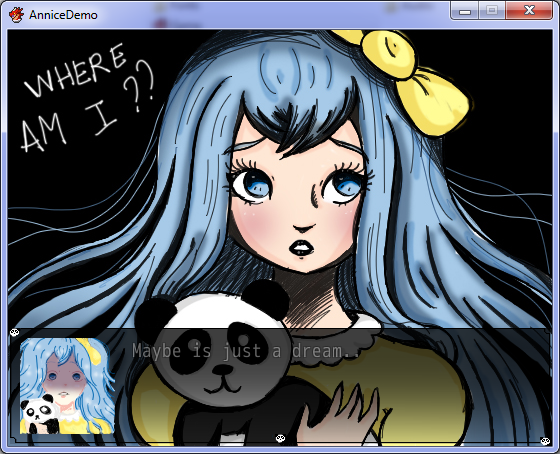 Yes, one of the first lines you see is grammatically incorrect. Developer ought to try pasting dialogue lines into Word document for spellchecking, or something.

It's still rather basic, but now it actually feels like a story. Firstly, Annice is told to wake up, and wonders where she is, yet is not all-too-surprised by anything unusual she sees. The previous demo had your first conversation occur with some pink door that wanted you to steal the key to open it, and which did not reveal anything else at all, and so was wisely taken out. All the other characters you encounter in the game also hardly say much of anything, but now it clearly feels like an actual attempt to be cryptic and mysterious, and it works better the longer, but emptier conversations of the original demo. There also seems to be the "angelic-demonic" thing going on, with the game likely providing choices associated with it. For now, though, the game instantly sends you to menu if you try to enter either room, so I suppose we'll have to wait for that in the full game.

I suppose I would've been a lot more invested in the narrative if the game had fully utilized the potential of the environmental description. As it is, it's still rare, and is simple even when present. Bookcases are labelled simply as “Books.” , “A lot of Books” or “So much books”, for instance. When it’s “There’s my favourite fairytale here!” once, you don’t get to hear what that one is. You can’t get comments on the view from the windows, on the fountains, or the crackling (well, they're animated but silent in this game, actually, but you get my point) fireplaces, to give just a few examples. There are more than a few instances in the first half where you can try walking to some room or a corner of the map in the distance, only to find absolutely nothing there that you can interact with, and it rather detracts from the immersion. That hedgerow maze, for instance, would've been a lot more interesting if you could still find something distinct that would at least draw a comment from Annice along every dead end. 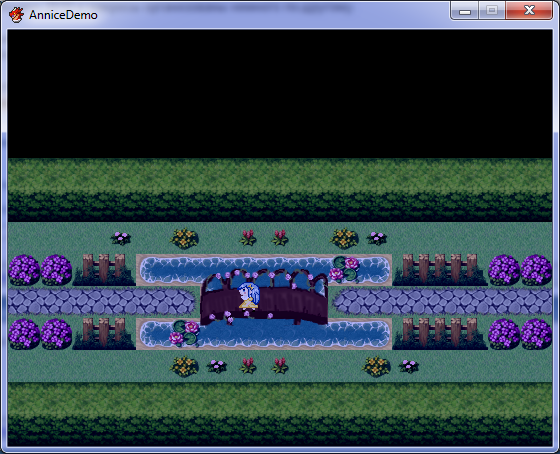 This map with a bridge is quite nice, especially when compared to what it replaced in the earlier demo. 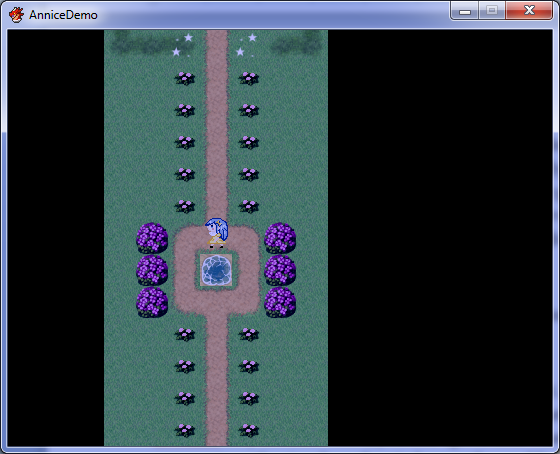 Annice's final demo represents a considerable improvement over the original one, and while there are still more then a few unaddressed issues, I'm now somewhat interested in where the game might go from here.

PS= why you have to spoiler the game? i mean if you find this so bad you should write why and put spoiler in "hide" section. please edit it.
And stop comparing the game with others.
NTC3

Close
02/23/2017 09:14 AM
You're welcome! And well, pretty much all my reviews are like that. People have different standards, so I like to let the readers know about the similarly-themed games I've played earlier, and which obviously colour my judgement of the game at hand. It's particularly valuable if they had played those games earlier, as then they would have greater context.
AliceMisaki

author=NTC3
You're welcome! And well, pretty much all my reviews are like that. People have different standards, so I like to let the readers know about the similarly-themed games I've played earlier, and which obviously colour my judgement of the game at hand. It's particularly valuable if they had played those games earlier, as then they would have greater context.