The road not written.


The Elemental Stories is a game that has a interesting premise, the story played out in the game is meant to be shown from the viewpoint of one of four main characters. The player chooses this character as the game begins and then follows their storyline through a series of events. However all of the four characters are supposed to cross paths to a greater or lesser extent during each of the separate storylines which means in order to get the full story it would be necessary to play through the game as each of the main characters adding more information and knowledge with each play through. Whilst this isn't a new idea and has been used in various medium for centuries it is always interesting to see how a writer can keep interest for the viewer when they are seeing the same story played out, just from a different perspective. Unfortunately that is something that cannot be established in this game as the developer never got past the storyline of the first character, Jason, in the available content. You do get tantalising glimpses of the other characters you could have played, and some of the results of choices they make within the one available storyline but it is disappointing that you are never going to get the full story. 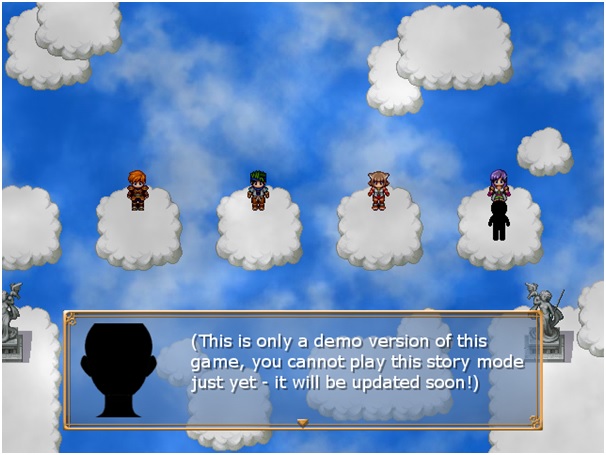 Why do these people even have clouds?

Still you can only judge on what is available so the storyline you do get to play up to the point that the available content ends is that of Jason, the young trainee being prepared for a life of swordplay and derring-do by Master Exercise (yes that's his name) in his small and of course peaceful village of
Southwood. However before that you get an exposition heavy, and unfortunately also spelling error heavy, introduction movie which explains the title of the game. It seems the world is watched over by a guardian angel or goddess (both terms are used in the intro) called Athena who created four lesser elemental goddesses to maintain the peace. Those four elementals created weapons imbued with their powers and gave them to four warriors, because we all know the only way to peace is through superior fire power, and peace was maintained, until a sneaky so-and-so called Frank discovered that Athena had a dark, though not evil, twin called Selene who gave her power to him because he asked nicely. He used that to wipe out the four heroes and go about building a criminal empire with a little bit of regicide on the side. Now it appears it's time for the four elemental weapons to be wielded again, and we get to play out the story of Jason, a young man destined to wield one of the weapons. That isn't stated up front of course but this isn't my first rodeo so I can see the way the wind is blowing.

So after Jason spends a few hours with Master Exercise, also known as the tutorial section of the game, where he learns the basics of a side view battle system and that in this game MP is called EN for energy, he heads home to be confronted by a bunch of beer swilling bipedal wolves hanging around the front of his house in a reggae fashion. Before I get into that I do have to give a shout out to the music used in the game. It's all ripped and/or commercial tracks, and it's not something I would normally associate with a game of this nature, but oddly it seems to work, for example our chilling wolves are accompanied by Bob Markey's Waiting in Vain. It's not HipHop, but it works. 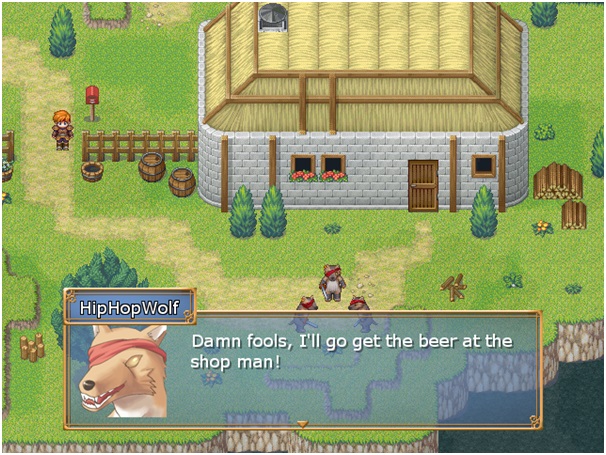 So after taking out the small band of wolves and learning they have been driven from their home further North it's time to clear the rest of them out of the village where they have taken up residence and are on the lookout for snacks and honeys. Personally I would have just introduced them to the local narcotic and then shifted them out of the village while they slept it off, but that is no way to gain experience, so it's time to slaughter them as well as their leader and in the process run across a secondary character who is important in one of the character arcs you won't get to play. Once you've dealt with the threat we get a cut scene with the evil Frank, sorry now he's referred to as Don Francisco complete with the Godfather theme, deciding for seemingly nonsensical reasons to inform his lackey all about his plans for world domination as well as giving orders to bomb Jason's little village back to the stone age. It appears he knows that future elemental weapon wielders come from the most unlikely places and he's not taking any chances with seemingly innocent civilians and peaceful villages, he's going to wipe them from the face of the map just on principle. Actually thinking about that, it's not the most nonsensical reason; if more villains took their clues from the villain's handbook there would be a lot less threat to them later on. Still he does of course fall into the narrative trap and fail to make sure every member of the village is within its confines when he nukes it from orbit, so of course he gives the hero his raison d'être, the need to avenge the deaths of all he had ever known and the destruction of his home. Clichés do have such a life of their own, they will not be denied by the judicious application of logic and reason. 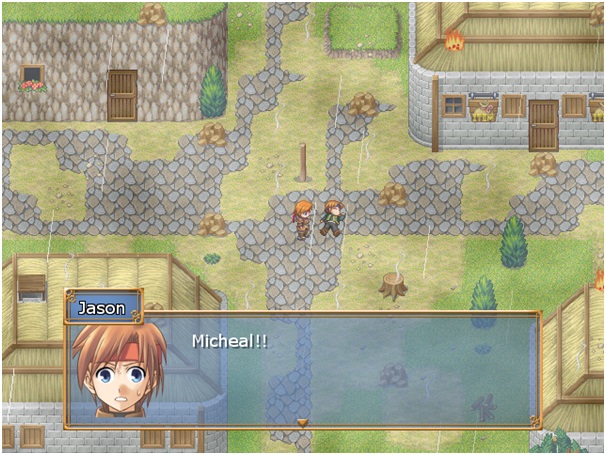 After learning some facts about evil Frank from the dying soldiers sent to ensure that the village was destroyed Jason runs across Joshua, one of the other potential player characters who likewise doesn't seem to know anything about Frank, which does strike me as somewhat odd. Whilst Jason has spent his entire life inside the little rustic backwater of Southwood, Joshua is a bit of a world weary thief and resident of the outside world. That he doesn't know about someone with a vast criminal empire, when he himself is a criminal is more than a little improbable. Add to that the fact that Frank has recently murdered the King and is preparing to set himself up in his place, and he's supposedly in control of vast standing armies the idea that no-one other than his lackeys and soldiers seem to know who he is seems unlikely at best.

Perhaps this topical amnesia would have been explained in the unseen 3/4 of the game, but as it stands it just appears to be a plot hole large enough to drive a lorry through.

Still after another but fortunately less fatal run in with some of the hiphop wolves, and a general slaughter of every soldier he can find, Jason finally gains another party member in the form of Princess Paradise or Paris for short. How either Princess or Paradise translates into Paris is beyond me, but by this point the story has gone beyond the far-fetched and into the farcical so I'm really not surprised by anything. After rescuing her brother from a ludicrously lax series of guards and one slightly challenging combat with the commandant of the base-cum-prison Jason joins Paris and her newly freed brother William for a night at the royal palace. 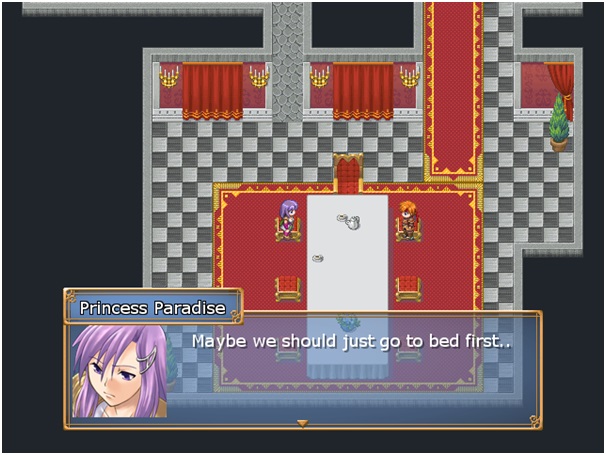 If a Princess lets you know it's time for bed, you go.

The palace fortunately appears to be situated right on the edge of the central lake, which is where our hero has learned the evil Frank has his home base so he's planning to stop and restock before heading out to seek his revenge. In the meantime he'll have a leisurely exposition dinner with the two royal siblings and learn that not only did Frank kill the King, their father, but that he is also their uncle, and that if Paris does not choose to become Queen, Frank will automatically become King. I'm all for a world without primogeniture, but to then completely disavow standard laws of succession and skip over her brother William entirely takes a new level of disbelief. Also the question does have to be raised if William has for some reason no claim to the throne, why was he taken prisoner in the first place, and also given that the palace seems to have a fair amount of competent guards, why did the Princess go off on her own to rescue her brother? Since Paris is one of the characters shown in the opening sequence as a future playable main character I imagine that might have been explained in her story arc, but alas, we'll never know.

Still after a night at her Highness's pleasure Jason is off to beard the demon in his den and once again the ridiculous comes to the fore with Paris rejoining him even though she'd already pointed out she is the only thing standing between Frank and the throne and he's already murdered both her parents and blown up a harmless village, but sure go put yourself into his hands, that's perfectly sensible. Luckily for my sanity the demo ends soon after this point with the villain proving once again he is the most logical and well rounded of the characters seen thus far (it's such a shame you can't play as him) when he has his powerful lackey render both the Princess and Jason unconscious with a simple spell, binds them and transports them to a plane where they will be unceremoniously dumped from 20,000 feet. Because even villains have to abide by the rules of narrative and not just cut their heads off then and there and be done with it. Alas, we do not get to see that justified end for these two senseless characters, and given the fact the gamepage hasn't been visited by the developer in over 2 years, I doubt we ever will.

The Elemental Stories seems to be a case of the developer biting off more than he could chew and predictably making a bit of a hash of it in the process. It's not that the story isn't simple, it is, it's one of the simplest there is, but it appears that the idea of interweaving four separate threads into one cohesive whole was beyond the talents of the developer and it means that the story as portrayed is simply badly woven and full of holes. In its current iteration I can't recommend it to anyone to play, it's a button mash in regard to combat, the RTP graphics whilst not used badly aren't used with any flair or style either, the spelling and grammar leave a great deal to be desired and the story is foreshortened and increasingly nonsensical. The music whilst somewhat inspired and interesting doesn't make up for the failings.

Close
08/23/2015 03:06 AM
great review (tho i skimmed thru alot honestly)
i was going to play this when i was lookign at the game page and kind of assumed its canceled tho not marked for w/e reason. guess it saves me some time :D!
Pages: 1