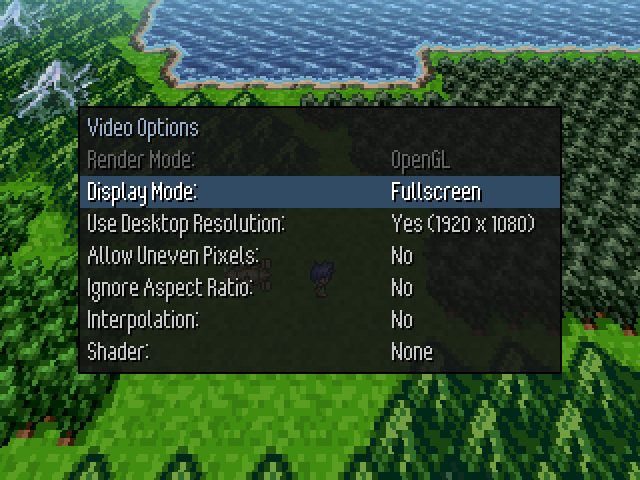 Note: If your game uses the "Play Movie" command, this plugin doesn't handle it well from a fullscreen context (since OpenGL's fullscreen mode is exclusive), so it has to switch back to a window. This is obviously not great, but it's the best I could do. If playing in a window, the video should play fine. Personally, I would suggest not using "Play Movie" at all since it's garbage to begin with (calling it twice in a row for example will show a black screen the second time). If that doesn't apply to you, then onward!
Usage

F5 key - Launches into the "Video Options" menu, navigated with arrow keys. F5 again, or Escape will exit the menu.

Thanks for making this!
bulmabriefs144

@load_video_options
(you can set this inside some kind of system menu)

@quit_game
(if you need to hard quit from a game)

Close
06/06/2018 03:41 AM
For those using this plugin: I just updated it to use SFML (graphics library) v2.5.0 from v2.4.2. v2.5.0 has some performance improvements (sf::RenderTexture class), although they're probably too tiny to notice. The plugin code itself is the same. Just redownload it and update all of the included *.dll files if you want to try it out.
kaine87

I'm noticing it messes with the mouse plugin when in windowed mode at most resolutions. I can always see the cursor on top of the game window now, and the in-game mouse cursor is way off sync. It only syncs in 640x480.

Is it possible to hide the windows mouse cursor?

I can't press F12 while in fullscreen mode.

I decided to disable F5 and put commands in game. I notice that when you are in fullscreen, and then use @toggle_window_scale 0, it has a weird effect of sometimes enabling @set_ignore_aspect_ratio. I refer to that as widescreen in my game. Should window scale really affect anything in fullscreen? It keeps it fullscreen but shrinks the visible play area. Who wants that?

Anyways, I just disabled the option of window scale while full screen is on. Oh and while in window mode, and I change widescreen, it doesn't change anything but later when I do go into fullscreen, it doesn't always work right. Sometimes it won't be widescreen, and when I change the option for it, it doesn't work right away(not widescreen while option is set to ON). I have to cycle between on/off a few times then it matches up. I have a fix so this one is fine for me but I thought I'd mention it.

When using F5 and I change uneven pixels, it auto puts aspect ratio to yes as well. In that menu they seem to be tied together, if one is yes then the other is too. When I use the @command to change one, does the other change as well?


Can you explain how this would be used:

And I plan on using shaders for special states in game. Like when you get turned into a ghost I'll turn on some filter. It will look pretty cool :D Is it impossible to use 2 shaders, like any of the color ones on top of the scale2x one?

Wait, how do I call a specific shader? I only see a command to cycle between them.

Is there a way to tell which shader is active? There doesn't seem to be much control for them. As it stands it's merely a gimmick for a player to choose between, instead of me being able to integrate it into gameplay.

I could rig a system with variables to change and keep track, but then I won't be able to give the player the option of using the Scale2x filter, which would be unfortunate. Or...well I guess I could, but it would be so much better if I had more control.

It seems that when I start a new game it remembers any set shader from a previous game. This could be a problem if the player quits while a shader was changed, or if scale2x is on then the player starts a new game. Things will be really messed up and I'd have no way to implement a fix with code. I am using the AEP patch too, so maybe it's remembering something there?


There's a typo in the DynRPG.ini file info.


Is it possible to add more shaders? How would one find them?

I notice you can open the .frag files in notepad and change it, but I don't know what I'm doing here. Maybe I'll figure out something cool heh I'll try to reverse engineer these things.

I finished the system to control shaders in my game. It works just fine except for the issue of quitting the game while it's not on NONE. For now I'm adding a recalibration screen where the player will have to cycle them until it's normal. But it would be nice to have simply a @set_shader command :)


I'm having a problem where at the title screen when I do test play, it keeps setting the shader to #7. I have a common event:call trigger that uses a variable/branches to set the shader to a specific one(no other events do this unless triggered by the player), but it only works if the game starts at shader #0. I put a message command at the start of that event to see if it was being called somehow when I start game and it's not. I tried putting the player starting position on a different map, still happens. I wasn't doing anything in the common events, I was working on map events that were on trigger. Not parallel or anything. There is no reason it should be doing this, that I can think of or find. I've checked everything I worked on in the last hour because it just happened a few minutes ago. Nothing. Could this be a bug?

UPDATE: It seems like it was a bug. I downloaded a fresh copy and pasted the main game folder files and that solved it.
PickyIcky
0

Close
08/15/2020 08:00 AM
I'm getting an error when opening RPG_RT.exe
Every time I open it it sends an error message saying "Plugin "system_opengl.dll" is not compatible with this version of DynRPG!"
I have tested this on a seperate computer to get the same error.
I believe to be using version 0.32 of DynRPG, do I need a different version?

author=PickyIcky
I'm getting an error when opening RPG_RT.exe
Every time I open it it sends an error message saying "Plugin "system_opengl.dll" is not compatible with this version of DynRPG!"
I have tested this on a seperate computer to get the same error.
I believe to be using version 0.32 of DynRPG, do I need a different version?