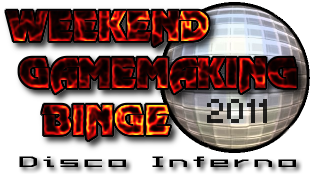 People have been shouting for an event of some sort and now it happens. It's the traditional biennial Weekend Gamemaking Disco Binge. Pick out your favourite disco tunes and make those games!

Basics about the event
The idea is to have a quickie weekend filled with gamemaking fun (and the nasty horrors of gamemaking and staying up all night staring at a strobe light trying to get inspiration). The themes are Disco and Fire.

How you incorporate these themes are entirely up to you. You may only pick one of the themes but it's a lot more awesome if you incorporate both. It is after all about fun and games so don't cut those wrists over it if it doesn't quite work out. Even the most liberal interpretation of the themes is most likely to go through (but don't tell anyone I told you that. It's a secret)

Rules
* The event starts on Friday the 28th of January 2011. It ends some time on Monday the 31st (of January 2011). Try to get your entries in before February at least.
* The entry must be stand alone and playable on a Windows 7 machine. If I need to download the latest Unity3d engine or fiddle with DosBox to make this entry run then you better be including it in the installation package with instructions.
* Submit entries through the event submission system. Or post a link to them in the comments. Or send them on a USB taped to a carrier pigeon. The most important part is that entries need to get to me. You are allowed to update your entries up until the deadline.

Those are the hard and fast rules. Then there are
Guidelines
* You are allowed to use any resources you have. Even if you aquired them through dubious means. (just don't tell me you aquired them dubiously. I knew nothing of this.)
* Though even if you are allowed to use any resources it's always nice if you credit any and all sources. Either in-game or in a readme/credits file.
* I accept bribes. PM Shinan if you want paypal information or a postal adress to send your gifts to.
* Yeah before you ask. Obviously RPGmaker games are accepted. Just because I used Unity and dosbox in my examples doesn't mean you have to go all weird and techy. It was a joke.
* The bribe thing was not a joke though. Honest.

Btw, I didn't want to mention this but... knowing the theme beforehand, can't we start eariler?
NewBlack

author=calunio
Btw, I didn't want to mention this but... knowing the theme beforehand, can't we start eariler?


It's not like I'll know if you do or not. Just make sure you don't tell me if you do start early.
Max McGee

I wouldn't even be able to help judge entries.
Liberty Well, I will raise you my own title. Though I think I came up with a better name a few hours ago, but I uh...can't remember it. Disco Fever stays...for now. By the way I drew this in like a half hour (took me longer to get the title music to a .ogg file >.>)

also I fail at hide tags.
EDITInfinity: Not a blonde version of Sephiroth.
calunio

I came up with my final idea. I think it'll be called DIE2DANCE. Screenshot soon (hopefully).
Puddor


OK my entry will probably be crap, but hey it's going to be fun~!
calunio

Doncha wish your girlfriend could sprite like me... doncha!
WolfCoder

author=WolfCoder
I have no idea what the hell I'm going to make with what little I have >.<

Don't worry WC. Mine's going to be atrocious too :)
Shinan