Close
12/12/2014 10:37 AM
@Xenomic: Honestly the bottom pic is basically fine except for the roof. I don't really think those tiles work as roof tiles, and it would look more Greek if the roof were triangular.

Triangle doesn't have to be in the front, it can be on the side. That would make the roof look something like this: Which I created by just squishing the roof tiles in MS Paint for the "back" half.
Rebezion 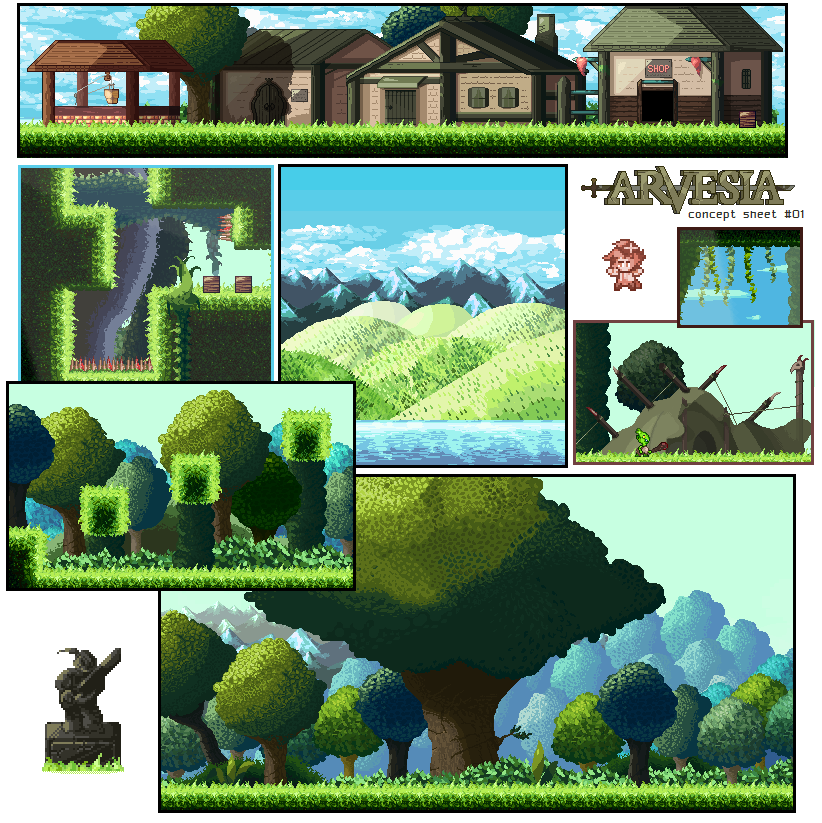 author=MISTER BIG T
Are the white spots in the dialogue box in game? I'm not sure how I feel about them, they kinda seem like they'rer an error or something and kinda obstruct some of the letters.

This feedback was thought about heavily, and I decided that yeah, you're right. They were meant to be stars but they weren't working for it.

Pretend after this that I was never here. Shhhh! :0
Blind

author=Rebezion
I made a concept sheet for a game, I plan to release 1 every 2 months.
http://3.bp.blogspot.com/-MlCQzhP6Z-E/VItYEIUUjtI/AAAAAAAABsg/_NvVNQo8U58/s1600/backg.png

Absolutely gorgeous! You have some serious talent! ;D Any plan to develop that or is it just an art experiment? Close
12/13/2014 04:59 PM
"what a poor excuse for a father you are" is one of the most flat-sounding sentences i've ever seen written to the point of being completely ineffectual. i cannot imagine anybody ever speaking like that except maybe like morrigan in da:o/da:i, and even then not in anger but in a more playfully malicious way

Close
12/13/2014 07:10 PM
Hahah damn, is there currently a Misao award for an overly pointed comment most effectively disguised as feedback? I'll be sure to nominate ya. ^-^
Craze

author=Rebezion
I made a concept sheet for a game, I plan to release 1 every 2 months.
http://3.bp.blogspot.com/-MlCQzhP6Z-E/VItYEIUUjtI/AAAAAAAABsg/_NvVNQo8U58/s1600/backg.png

Absolutely gorgeous! You have some serious talent! ;D Any plan to develop that or is it just an art experiment?


thanks, hm. I think it's semi-expiremt now. I will see how much time I can spend on this concept/project.

I have some edited chipset here too - it may help you / or not. Check it out if you want to. (note: those are custom edits, something is custom but a lot of it is just downloadeded and reedited). I think one is even from um, lands of lunori but i never used those orig. parts in my game from that one. I just reedited cave parts. edit: i've since changed the first sentence to be "With no children, no spouse, and no siblings..."
Max McGee

Close
12/14/2014 08:15 PM
Why does this ostensibly medieval society have the concept of "terrorists"? The word terrorist is a fairly modern linguistic contraption for the purposes of "demonizing whatever faction we don't like". Terrorist didn't see any use until the second half of the 20th century and honestly didn't see heavy use until the start of the 21st for obvious reasons. During most of pre-Renaissance history using tactics that harmed non-combatants designed to terrify your foes was the rule, not a special exception, and didn't warrant any special label. I mean obviously in general terms "realism" is not important I wouldn't ask that they be speaking Middle English or anything it's just that using "terrorists" doesn't feel right.

Edit: If this seems like I have thought about this lot, well this is not the only quasi-medieval fantasy game I've seen the word "terrorist" used in lately.

Edit2: I have stared at it a lot, and I cannot quite tell if that face portrait is supposed to be wearing a monocle on her left eye or not.
Craze She has a monocole. (This is a cropped and boob surgery'd version of the original image, for people who've seen the pack as a whole.)

This game is definitely not medieval, but also definitely not 20th century either. The country of Hargrave is run by a congress of elected representatives and a life-long Primary Board of six members (think Supreme Court), of which that woman in the cell is the last remaining one, because the other five were assassinated. Two representatives were about to give a presentation on the use of magical apparatus in agriculture and its effect on the economy, when they unleashed a sleep bomb and did the killing.

It's not medieval, it's not modern, and I'm using "terrorist."
Liberty

Close
12/15/2014 01:31 AM
Even if it were fantasy, who cares? It's your world - terrorism still exists if you say it does. As long as it's not set in our world, with the intention to be set in a particular time period, then there's no issue with it. Just like there's no issue with using the word Assassin in a medieval setting, even though it was created by Billy Shakes way after the medieval years were over.

Using magic to attack a ruling regime and hurting people with deliberate acts of violence to induce fear from the populace is terrorism and calling it such in your fantasy game is a-okay.
Max McGee

Close
12/15/2014 01:44 AM
Well to play devil's advocate in any medieval-ish fantasy setting it's very likely that the massive rape and pillage of civilians during war time exists. Is that terrorism?

There is nothing objectively *wrong* with the word terrorism, it just has the wrong *flavor* for a medieval or historical fantasy setting, the same way I'd try to avoid using the word *hypothesis* in a fantasy setting that resembled a historical period where the scientific method hadn't been discovered yet.
Craze

1) i'm calling the public assassination of the highest-ranking government officials "terrorism" in my game regardless of setting, so =|

2) not only is my game NOT historical nor set in a medieval world, my most important goal as a developer is to entertain an audience. when i say "terrorists" in the third text box of my game, it immediately conjures images and ideas in the player's mind -- that's the effect i want. it's not for a short while that the details of the act are discussed, but the player already knows "the bad guys negatively affected this country and this character is against them"

3) what would i say instead anyway? rebels? because a small rebellion is already a major plot point in the game, but although they (somewhat) agree with the terrorists they are an ineffectual group and not of much use to any side of the game's conflict (not until they become party members anyway). i'm using the word i believe is the most apt descriptor of my game's villains

4) i also call them "traitors" at points. that just doesn't carry the same weight as "terrorist" though (see #2), and a "traitor" could be like Snowden, who went against his country's government but in the people's best interests. introducing my villains as "traitors" just doesn't pack the punch "terrorists" does, although both are technically correct terms

Close
12/15/2014 03:09 AM
Max, I think you just have a LOT of difficulty with anything resembling suspension of disbelief.
Housekeeping

Close
12/15/2014 03:29 AM
They didn't have hairspray in medieval times, either, but that doesn't stop every jrpg in history from giving their protagonists an ample supply.
suzy_cheesedreams

Close
12/15/2014 03:48 AM
""Terrorism" comes from the French word terrorisme, and originally referred specifically to state terrorism as practiced by the French government during the 1793–1794 Reign of terror. The French word terrorisme in turn derives from the Latin verb terreō meaning "I frighten". The terror cimbricus was a panic and state of emergency in Rome in response to the approach of warriors of the Cimbri tribe in 105 BC. The Jacobins cited this precedent when imposing a Reign of Terror during the French Revolution. After the Jacobins lost power, the word "terrorist" became a term of abuse. Although "terrorism" originally referred to acts committed by a government, currently it usually refers to the killing of innocent people for political purposes in such a way as to create a media spectacle. This meaning can be traced back to Sergey Nechayev, who described himself as a "terrorist". Nechayev founded the Russian terrorist group "People's Retribution" (Народная расправа) in 1869."