Owl's Nest is a demo for what has all the signs of being an extremely technically impressive Legend of Zelda style dungeon crawler crossed with a Chrono Trigger style RPG. It oozes personality and bulges with awesome custom graphics. All it's missing are OWLS. Let's dive right in. 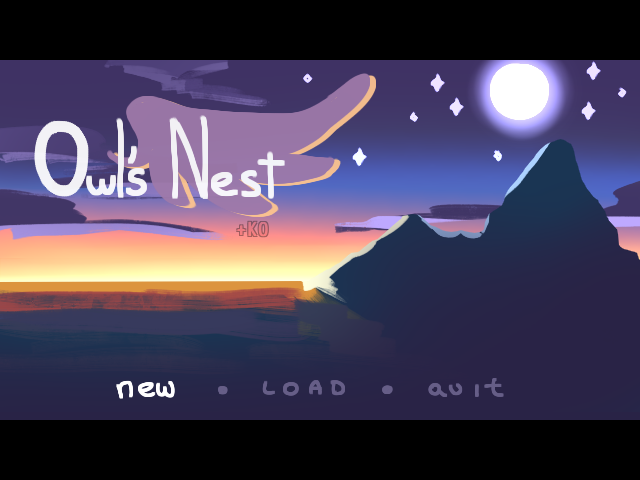 Nish and Anake are brother and sister although from the looks of it, one of them is adopted. Adopted or not, their mother is clearly a little indifferent as to whether they live or die, as she has sent them into a dungeon full of dangerous monsters and traps as an errand, chore, or test. The purpose of this test is unclear, and the world outside of the dungeon (indeed, outside of the demo) seems exceptionally murky. In the absence of more worldbuilding, the story of the demo seems to amount to: not-exactly-parent-of-the-year material mother sends siblings to die or not in dungeon for mysterious purposes. I imagine the full game expands on this premise a good deal more.

Oh, in terms of the characters, Nish was cautious to the point of cowardice, and his sister Anake was fearless to the point of idiocy. Not exactly blowing me away, but this was a simple 30-60 minute long demo.

Legend of Zelda style field abilities, in an RPG! It's not like it's never been done before, but it's done with panache here. Anake can smash obstacles (and enemies but I'll get to that) with her hammer. Nish, her brother, can turn invisible to avoid enemies (as is increasingly fashionable, Owl's Nest uses avoidable on screen enemy encounters rather than the unavoidable "x steps then battle" random encounters that RPG Maker VX defaults to) and hazards. Nish's ability is one that I've used in a few of my own unpublished games so I know a thing or two when I say it's perfectly well executed here. Midway through the demo, Anake gets access to a BIGGER hammer that can smash BIGGER rocks, but Nish's ability never progresses. It's also an MP hog: generally when I went back to the tent near the beginning, it was primarily to recharge Nish's MP.

In terms of their combat abilities, our wonder twins are a bit less depressing. Anake can really be summed up in two words: STOP! HAMMERTIME. Her ability to throw her hammer is an interesting example of flawed game balance. It costs 2MP, does about twice as much damage as a regular hit, and requires her to waste a turn to retrieve the thrown hammer afterwards. Since with the action economy, you're not really getting ahead doing double damage if you have to waste a turn to get the hammer back, it should either not cost MP to use (this is a minor point, admittedly--Anake does not have much if anything else to use her MP on!), or should do closer to 2.5x normal damage so it's worth using. Besides "when all you have is a hammer, the whole world starts to look like a nail", Anake's other ability is to...use items. And items can only be used through her ability. I really don't think this added to the game, and it would be better off if both characters can use items normally.

Nish's skillset includes light magic (cool! that's probably how he turns invisible too, like...bending the light or something) and...the ability to be shy (um, what). 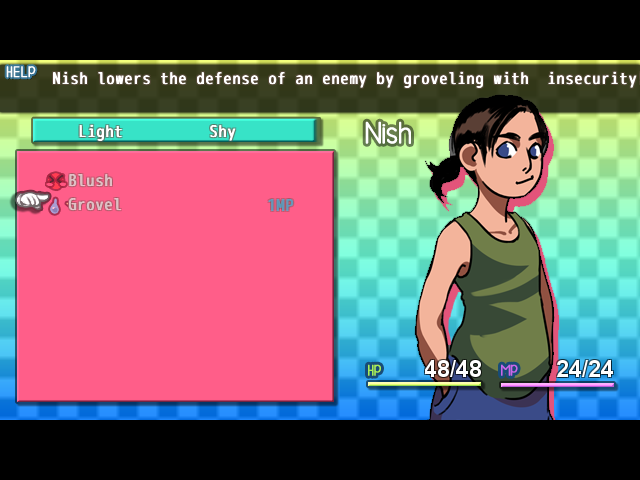 "Fear my mighty um...groveling!" Look, even if we accept the ridiculous premise that Nish's pitiful wimpering will have any effect on your enemies, who are either golem-like constructs or subhuman cavedwelling troglodytes, it should obviously decrease their ATTACK, not their DEFENSE.

Quite counter-intuitively, Nish's "Shy" command tree also allows him to draw enemy aggro. I used this a few times, stacking all the defensive items I found (the chronotemporal accelerator, the shielding bracers) on him. When he unlocked Brighten, I found that to be a better use of his turns.

Anyway, so that's probably more than enough about the characters and what they can do. The dungeon itself is really cool. There's plenty of obstacles to break to clear a path, enemies to fight, dash around to avoid, or evade with Nish's invisibility, a D&D style monitor that teleports you back if it spots you, running jumps, and even some timed jumps towards the end. The UI is nice and intuitive. The game even gives you a nice, honest opportunity to get in too deep and get yourself killed, which I respect (that's how I got the +KO stuck on my title screen). 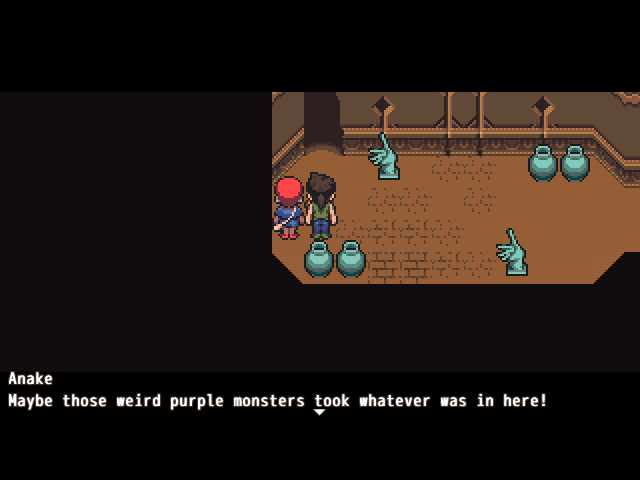 Yes, and maybe you should LEAVE THEM THE FUCK ALONE! 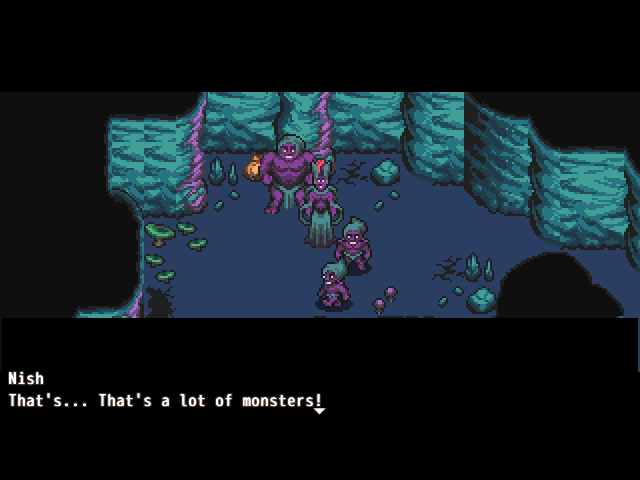 Yes, yes it is, and I would seriously consider NOT FUCKING WITH THEM

The encounter I'm referencing is probably beatable...probably...but what's cool is it's also possible, just barely, to use Nish's invisibility to dart in and retrieve the pilfered items from the purple cave monsters.

Sights
While some elements of its graphical style were not exactly to my tastes, there is no denying that Owl's Nest is a feast for the eyes. The UI as men tioned above was attractive and functional. The main character sprites are high quality work, and have poses such as dashing, turning invisible, and bringing the hammer down. (The fact that they always face the camera to mug for the camera/emote is a little awkward and distracting.)

The tilesets or parallax maps or whatever were entirely custom (as always, if I'm wrong, readers should correct me!), and the most impressive to me by far were the enemy sprites, some of them huge, impressively animated both on the map AND during the battle sequences. Very cool stuff. Most of the worldbuilding you get in the Owl's Nest demo comes from the visuals, and they hint at an ancient, technologically advanced civilization long forgotten...it's a very well worn trope, but I'm a sucker for that stuff in fantasy.

Having lavished praised on the graphics, I might as well mention the element that I hated. I thought that Anake's character portrait was badly done, I'd go as far as saying hideous to the point of grotesquerie.

Sounds
Sound effects were, I believe, mostly RTP but were well used. I did not recognize the music playing throughout most of the dungeon, and I'd feel silly if it was from the RTP. It had a cool dungeon exploration vibe, not too foreboding for this kind of game, not too cheerful for a dungeon, either. When I encountered the boss, a boss battle track I clearly recognized from the RTP came blasting out, and took me out of things for the moment.

Final Thoughts
Play Owl's Nest if you want to BRING THE HAMMER DOWN on some excellent dungeon crawling adventure/RPG action. Just, you know, maybe not so much if you're looking for owls. Where were all the owls, guys? I like owls.

Thanks for the review, we honestly love and appreciate it! Also, lots of useful stuff to work on!
JosephSeraph

Close
07/10/2018 03:34 PM
Such a great, descriptive review that both fills me with warmth and gives us of things to work on!
Very descriptive and useful feedback, that's intuitively explained and exceedingly useful.

Thank you for your effort! It is extremely welcome <3
Pages: 1