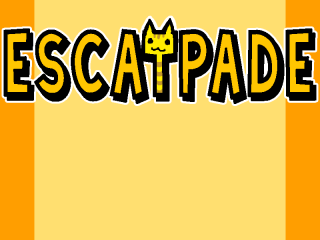 SYNOPSIS:
Escatpade, a combination of escapade and cat, is an exciting adventure filled with danger and felines meant as a form of escape. Very suiting when it comes to junior high school student Ico. She was just spending another day during her summer vacation when she suddenly hears the "meow" of a kitty cat. This leads to an experience Ico soon won't forget, as she finds herself trapped by an evil scientist named Wapumi.

Freeware Games (Furige), an annual voting contest where people can vote for their favorite Japanese indie game, hosted a seasonal freeware contest called 2016 Freeware Games Exhibition!: The FINAL Summer. Held from July 23rd to August 7th, developers were to create a Summer game based off of one of seven categories: Watermelons, Sun, Ghosts, Swimsuits, Typhoons, Summer Vacation, and All Themes. Escatpade won first place in the "All Themes" category which is awarded to the game that made full usage of all of the themes and convinced the judges that, "Yeah, I can totally feel the Summer in this game!" The first place prize is an entire original tile set from the DEGICA Tkool Store.

It is made by Amo using Wolf RPG Editor and it was released on September 28th, 2016. The American fan translation group, Memories of Fear, translated this game and released it on June 21st, 2018.