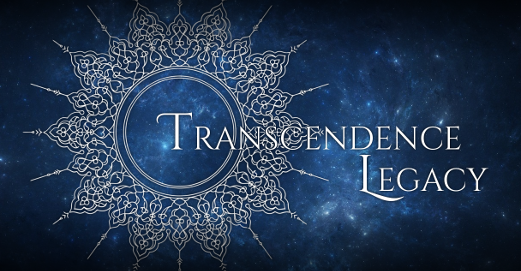 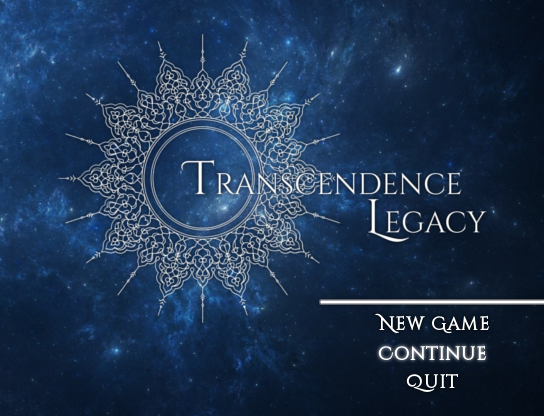 As far as first RPG Maker projects go, Transcendence Legacy isn’t too bad. It’s short and sweet, has some cool ideas, and clearly has some effort put into it. That being said, this game has issues that keep it from being truly impressive. The too self-serious nature of the writing and unnecessary mechanics don’t help its case. Still, I mostly enjoyed my time playing despite these lackluster elements.

The story of Transcendence Legacy has a solid concept. Four overlords once ruled the world together peacefully, but soon enough they began to disagree about how the world should be ran, and even how history itself should be written. Disagreement turned to war and now the world is divided into four factions, each one overseen by a different overlord. The plot follows a fellow named Xyrania, who decides to leave his home faction of Elysion due his dark elemental power being forbidden there. He soon finds out that leaving had more consequences than what it first seemed.

How does Transcendence Legacy deliver on this cool premise? Well, the story can be a bit hard to follow and even harder to connect with for a few reasons. Firstly, it seems like English is not Xurtheth’s first language. The grammar errors in this game are numerous, and enough to be a constant distraction. Perfection is a lot to ask for, but a lot more proofreading would have gone a long way to make the text more readable. The other, probably more important thing that hurts the overall plot are the characters. This game has too many characters. The main focus is on Xyrania, but there are fourteen other playable characters in this game and several important NPCs. Due to this, most of them are extremely one dimensional. Some even only get dialogue when they join the team and never speak again until the very end.

This wouldn’t be so bad if the game wasn’t so story heavy. Games like Demon Tower don’t have much of a plot but have a bunch of fun one-dimensional characters. This game takes those one-dimensional characters and tries to make an emotional plot with them. No one has a satisfying conclusion to an arc because the game gives them no time to have one. Even the main character Xyrania and his love interest character who I’m struggling to remember the name of have emotional scenes that feel flat. Basically, this game would have been better off either limiting the amount of characters and putting more weight on the few left. Or the plot could have taken itself less seriously to make room for a bunch of silly one-dimensional characters.

I could talk a lot more about the story, but I’ll just say it definitely was the weakest part of this game for me. It wasn’t all bad, though. A character named Zidane was definitely the best of the bunch(and probably for gameplay reasons too but I’ll get to that later). He brought a little lightness to an otherwise heavy plot, even if his whole character was “I’m goofy, but I’m gonna be a hero!!!” I’m also always tickled when a being usually considered “good” turns out the be the villain, in this case an angelic overlord. The creator says he likes the SMT series, and he clearly took some inspiration with the villain and his motivation, which is cool. This game’s choice of music is also pretty good, and I like the boss theme quite a bit. 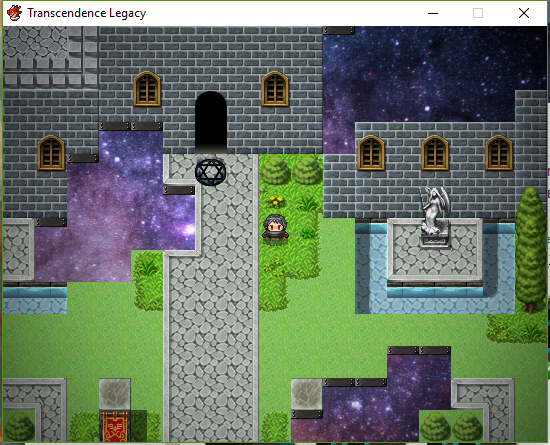 You can tell things are going badly when you can see the parallax through the floor.

The gameplay of Transcendance Legacy fairs better than the story, but still has some issues of its own. I’ll start with some good aspects, though. Touch encounters are always welcome in my opinion, as that extra bit of effort makes exploring areas much less painful. Side view battles are usually more engaging, and its implementation here is no different. I do wish something more sophisticated than the usual “enter all commands and watch what happens” style of the DBS was used, however. I also liked the character progression system of unlocking a new ability of the player’s choice after every level up. It’s not much, but it does let you feel like you have some control over how your characters grow. Finally, switching characters on the fly during battle can add some depth to the battles, though the method of doing so is a bit clunky and it can trivialize some fights.

My main issues with the gameplay aren’t about what’s there, but what doesn’t need to be there. Just like with the story, the fifteen playable characters are just too much. Especially when some characters are clearly better than others. In my playthrough I mostly stuck with the main character--because I had to--and two characters with overpowered attack buffs and multi-hit attacks. The fourth character slot would rotate as soon as someone better came along, usually a dedicated healer. This combination worked a little too well as the game was overall pretty easy. Bosses were still fun to take down with this strategy, but I can’t help but think how much more fun it would have been if the game had been balanced around a more reasonable amount of characters. It didn’t help that EXP earned was limited to your active party, punishing you for experimenting out of your comfort zone.

Another unnecessary mechanic is the crafting system. Throughout the game you come across gathering points where you find materials to craft items, usually healing items. There are also special key items you can get throughout the story that turn into more powerful items and equipment. While this can lead to some interesting decisions about what to turn your limited resources into, It’s very underutilized to the point of not really needing to be there. Healing items and money are plentiful enough that spending money on seeds to restore the gathering points to craft those same healing items seems tedious and not really worth it. As for the special crafting equipment, I’d rather those have been hidden in the world or tied to quests...speaking of...

The quest journal in this game is just a glorified way to keep track of the story. Granted, having all the story quests catalogued is good, but I question the need of a quest journal at all when you can count the amount of side quests on one hand. Even of these quests, half of them start and end at the same place. I guess this is more of nitpick, but it does fit the theme of adding in more characters/mechanics just because. I think if Xurtherth would have cut some of the mechanical bloat and really honed in on the important stuff like balancing, dungeon design(I’m looking at you, pyramid!!!), and making the story more engaging, the gameplay could have been great instead of just fine. 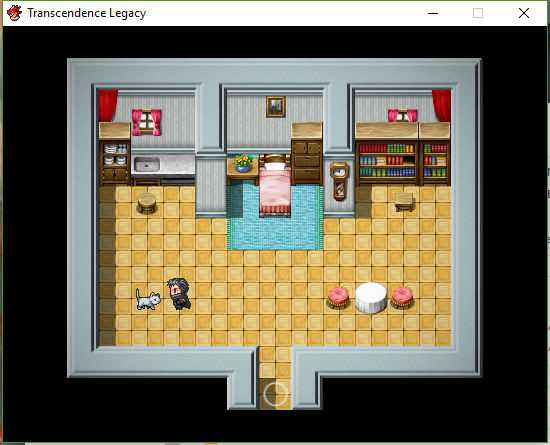 I might have forgiven the overabundance characters if I could have recruited this cat.

I’ll touch just briefly on this game’s presentation because it works well enough but isn’t anything crazy. Using bloated up versions of the character sprites as face graphics is a bit jarring at first, but it’s a cute way to get around not having those art assets while avoiding using the terrifying VX Ace generator faces…*shudders*. I’m fond of the window skin used...it’s just nice. The maps are hit and miss. Some of the dungeons are mapped really well, but the towns can be really bland. The game mostly uses RTP, and for the enemy battlers some spicy RM2k3 RTP. This makes the enemies look really small, but the actors are also small and 2k3 works better for the sideview so I didn’t mind too much. 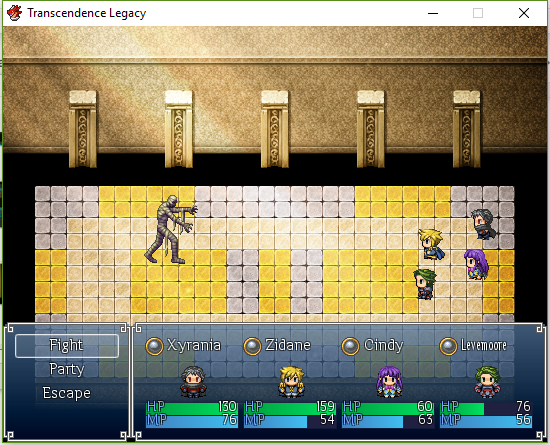 Like I said before, Transcendence Legacy is a decent first game. It’s not gonna win any Misaos, and it’s got some problems. However, it’s always something special to put your heart into a creation and release it into the world. I really hope Xurtherth had a lot of fun making this game and learns a lot from it to apply to the next one. With that, I award Transcendence Legacy 2.5/5 Stars.