The Sun Is A Star

0 reviews
Save to Dropbox
Plot overview
Lucian has received a letter from his ex-girlfriend Shelley, suggesting that she is in trouble, and requesting assistance. Upon arrival, Lucian finds that Shelley is already dead. Lucian is now investigating who killed Shelley, subsequently seeking revenge.

Lee is after the global crime boss, Top Dollar, for taking and corrupting Lee's son -- Brandon. Lee has recently acquired the guidance of Summer, who owes him a favor. Top Dollar's crime syndicate is the central power in the world, unsurpassed by any government, and their business is dealing hallucinogenic drugs.

As Lucian leads one party including Shelley's friend Rose, and Lee leads another party including the archaeologist Georgiana Clyde, all roads come together where Top Dollar is expecting to receive delivery of a valuable artifact. But when Top Dollar releases the immensely powerful Shades to replace his limited, human lieutenants; Herastotle's prophecy of The Light seems to be the only answer to stop him. Pursuing the trail to find Top Dollar again, the heroes discover that he has been exploiting a tribal species called the Bufo Matses to make drugs out of the toxins they secrete from their skin.

Gameplay
Gameplay is a side-view battle system RPG like the Final Fantasies with a max party size of 6 and skill design / monster design that makes for non-trivial choices in battle. Combat is not turn-based, but initiative-based, so characters with higher speed may take turns more frequently.

Apart from the 6-character max party size and custom systems; other strengths of this game are solid choreography, eclectic soundtrack, and the reasonably stylish and psychological dream sequence cut scenes.

This game has scenes, plotlines, or quotes that poorly borrow from The Matrix, Fight Club, The Crow, Conan the Barbarian, Back To The Future 2, Eurotrip, Dangerous Ground (Ice Cube movie), and Smooth Criminal.

This project is basically feature complete now. There may be some subsequent updates to balance monster stats and add more dynamic monster behavior, but that shouldn't be a big deal.

Implemented a minimap on the world map (toggle with enter key)!
Added to the final town a new NPC who sells legendary weapons. (You have to fight him, though.)
Fixed a bug where a monster tries to heal non-existent allies.
Improved treasures in one of the Act 5 dungeons.
Adjusted one of the Inn's scripting so that you don't run into a table.
Fixed a bug in the equip menu that would, for instance, continue to display page 1 gear when you were looking at page 2.
Fixed multiple issues with Omni Drain (didn't update display of user's HP and it could kill enemies without removing their graphics).
Refactored the CBS to make it easier to display non-default battle animations for enemy skills that re-use the fight function.
Dance club complete with moving spotlights and shuffled songs like What Is Love?

author=nemojbatkastle
I don't mess with the older makers any more, but how did you get those fonts so crispy and pixely? :wow:


Some of my systems are influenced by how the systems were done in an RM2K game called "Final Fantasy: Crystal Wings." So there's a few things going on...
-A lot of the font you see in the menu systems are actually pictures, not "Show Message" type stuff. I'm making them in IDraw using the "Tahoma,8,1,0" font. The letters have a shading of one black pixel to the right of the white pixels. I used to draw the black shading in manually, until I realized a faster way -- now I select black font color, drag the black text into the picture, and then select white font color, and drag that on top of the black font, but one pixel to further to the left (so sometimes white pixels will be on top of black pixels).
-Sometimes, I also use chipsets to display text. In particular, there's a chipset that is all blue menu looking graphics and also contains some text like "Owned Items," "Equipped Items," "GP," "Attack," "Speed," and so on.
-I also sometimes use Charsets to display text. Specifically, I have charsets for the numbers 0-99 and 00. So, in order to display stat numbers, I set an event to be a numerical charset and tell it to face a particular way to display a particular number, and split it up every two digits.
-For the "Show Message" font in dialogue (has a green background), which I don't think you're asking about, I used the RM2K Font Patch. https://www.indiedb.com/games/the-sewers/downloads/rpg-maker-2000-font-patch
Darken

I like the use of prerender/photographs but the characters not standing on the ground in the battle backgrounds really bother me.
LDanarkos

author=Darken
but the characters not standing on the ground in the battle backgrounds really bother me.


I'm not super happy about it, but I basically needed to take-up all of the vertical real estate (the screen is only 15 tiles tall, and it takes 12 tiles just to display HP and initiative meters). So options include dealing with it, or using a battle background that is 100% ground. I can try to go looking for panoramas that look good and have more ground, but like... finding panoramas that even look good to begin with can be hard, and finding ones that are tailored to exactly my game is basically not going to happen. I could try putting the character, initiative meter, and HP all on one tile, but that would be more crowded than I'm accustomed to seeing in RPG's. However... here's an alternative layout sample of what else it could look like. 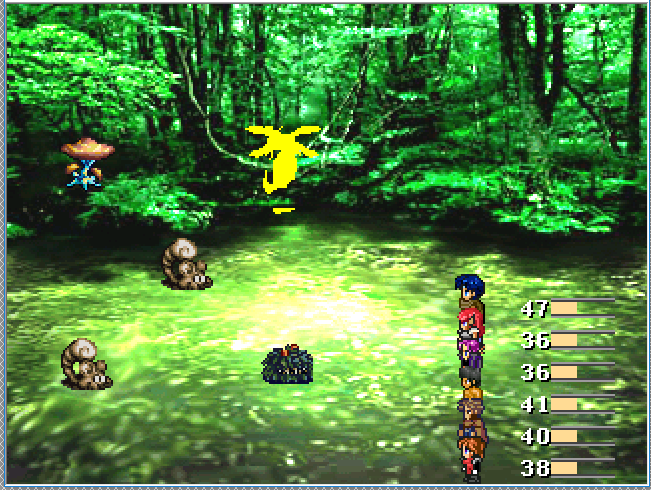 Close
06/01/2019 07:31 PM
Romancing Saga also has a bunch of characters, and although like 70% is ground you could spread them out horizontally (i believe this specific example is a formation) But I don't think anyone would mind a non single file line or something like this where characters gradually offset each other as they go down the line. 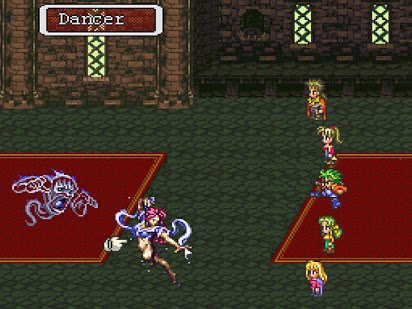 I guess also it would help if a character would step forward when their command input is on, I think there are def ways around your problem.
Zachary_Braun
0

Close
06/01/2019 11:12 PM
The first Romancing SaGa game had 6 playable characters. It used up most of the background in battles for the floor. (The perspective was kind of warped.)

I like the way the numbers are next to each person's bar in the modified layout picture, instead of on top of each bar. But I don't mind the non-Euclidian backgrounds. It might be interesting to just go fully abstract with the backgrounds. For example, a medieval leaf mosaic design for a fight in a forest area.
kenlan
492

I'm guessing it would take an uninitiated player about 15-25 hours. I wanted to balance the game so that it takes 0 grinding outside of fighting on the direct route. There are no random encounters, so you can try to juke your way around all of the normal mobs.
kenlan
492

Close
06/06/2019 04:19 PM
OK. Sounds perfect. I guess this is the project mentioned that you have been invested years into so i`m really looking forward to it.
That`s often the best games even if it does`nt mean work is done every day in years. Yeah,the balance is always important, and with a six members party it`s a little more to think about ( i think). I`m gonna let you know what i think(and find).
Professor_Q
"Life is a riddle I wish I had the answer for..."
3237

author=Professor_Q
Looks interesting, I shall have to check this out. ^_^