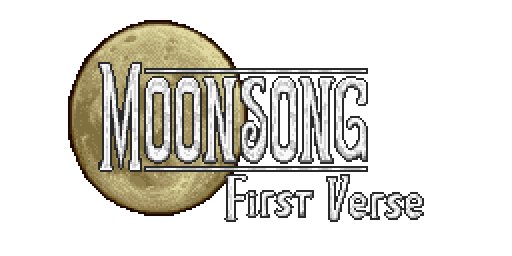 Moonsong First Verse is a traditional JRPG that embarks you on an epic quest against dark forces.

You start the quest by choosing one of 6 playable characters, each with his/her own background, specialty and skill set. I went for Leonov. Choosing the jack of all trades seems to me as the best choice to start with a solo character. But all 6 characters are viable start options. You quickly team up with Erik, a side character who helps you. During combat, Erik acts independently: the player has no control over his actions. This emphasize on the fact that Erik is an independent character. And it's an excellent way to keep the player's attention on the abilities of the character he/she choose. But you won't receive any new ability until you assemble a party of 3 characters. In the mean time, you can use Erik's healing abilities between fights.

Unlike most RPGs, where the limited amount of MP makes your use spells and abilities only against bosses, here you regain EP as you walk. This creates an interesting dynamic: you feel compelled to use your spells and skills but not to the point of completely depleting your stock because you don't want to start the next fight with 0 EP. Consequently, you can enjoy the skills created by the designer at most fights and have to be strategic in areas with a high encounter rate.

Once you've chosen 3 party members, you can peek in their skill tree to plan your character developments. Each character has a large set of skills to choose from and build synergies in your team. I kept Leonov (jack of all trades), picked Amelia (for healing) and Magnus (as heavy damage dealer). But roles changed as I unlocked new skills. And I embraced those changes. Leonov became a soldier, dealt medium physical damage and performed between battles healing. Amelia became an animist, and my best damage dealer thanks to her powerful spells and her large EP stock. Magnus became a captain, dealt medium physical damage and could cast some powerful spells too. For the last third of the game, all fights ended before the enemies could attack. None of the enemy groups survived Amelia's dagger rain or rockslide followed by Magnus' thunderclap. I wish there would be more challenge for the high level party.

The game is visually pleasing. It makes excellent use of custom graphics and rips to build a cohesive aesthetic. All the maps are very well put together and are very detailed. The environments feel really natural. They contain a lots of hidden treasures to reward explorers. I personally searched for all treasures and fought every monster on the way which probably gave me more experience than anticipated by the developer. The maps also change on subtle ways to naturally guide the player. For example a crowd gathers around a merchant to buy some popular goods, blocking the path until the player completed a key event.

The story is really captivating, with setbacks and betrayals. After the first betrayal, the designer made sure you'll always be on the lookout for unusual behavior and you'll probably suspect many. This is a brilliant way to make you feel like pawns in a large scheme and that you could turn things in your favor only by being very observant. At some point, your team wake up on a beach after a shipwreck. In my play, Magnus said he would never sail again. This felt extremely incoherent because his class was "captain". It would make much more sense to have another character say that line of dialog.

Music in the game widely borrows from popular titles to plays well chosen tracks for every situation. It also adds appropriate ambient effects like sounds for wind, water and seagulls.

On top of the well polished standard game-play, there is a neat stealth / infiltration section. You'll have to avoid guards spotting you but also dogs. I got a lot of game-overs simply because I checked every barrel and crate. Unfortunately none of them rewarded me for the risk I took.

As a Linux user, I tried to run the game in Wine but it failed. I then tried running it using EasyRPG and it works great! On top of running the game smoothly, EasyRPG gives access to a fast forward functionality which is very convenient to skip the intro (or cross the big desert) and experience the beginning as the other five characters. Note that Erik is part of everyone's adventure start so it's logical that the player can't play them all and keep a coherent story.

I've noticed some bugs and listed a few here. Overall it was a very pleasant experience and I'm waiting for the next verse.

I've heard from a lot of people now that the game is too easy near the end, which is an important lesson in really ramping up enemy difficulty to match a player's potential power. I guess I didn't expect people to be so good at brutalizing the enemies. I'll definitely ramp up difficulty in future releases!

Magnus saying he'll never sail again is definitely not intended. The dialogue is the same for whoever is in that player slot, but I'll likely go in an add a special option for him during that cutscene so he can't say it. It was mostly meant as hyperbole anyway, rather than a declaration of fact. The entire party will have to sail again in the Second Verse...

The barrels and crates in Karnev (the stealth section) are mostly there to block the player's path, but honestly they could use a couple of items. I always prefer to reward exploration whenever I can.

I'll take a look at these bugs and fix them all up. Guess I'll have to make a v1.3! I appreciate the screenshots, they should make it easy to patch everything up quickly.

All in all, I appreciate the review a lot!

By the way, what font are you using? There is one included with the game, but it doesn't seem to be the same one from these bug screenshots.
Irog

Close
03/13/2021 09:42 PM
Another way to solve the captain saying he'll never sail again would be to have Amelia say it while Magnus still unconscious on the beach (just swap the roles).

author=Irog
Another way to solve the captain saying he'll never sail again would be to have Amelia say it while Magnus still unconscious on the beach (just swap the roles).

It's given to whoever is in character slot 3. Because you chose Magnus last, he said it. If you had chosen Amelia last, she would have said it. It's not tied to anyone's personality, but instead it's tied to the order of which characters you picked when. I always wanted to have more branching dialogue for each character, but the constraints of being a solo dev meant that I had to make it a bit more generic. I can make a special branching condition for this one, though.