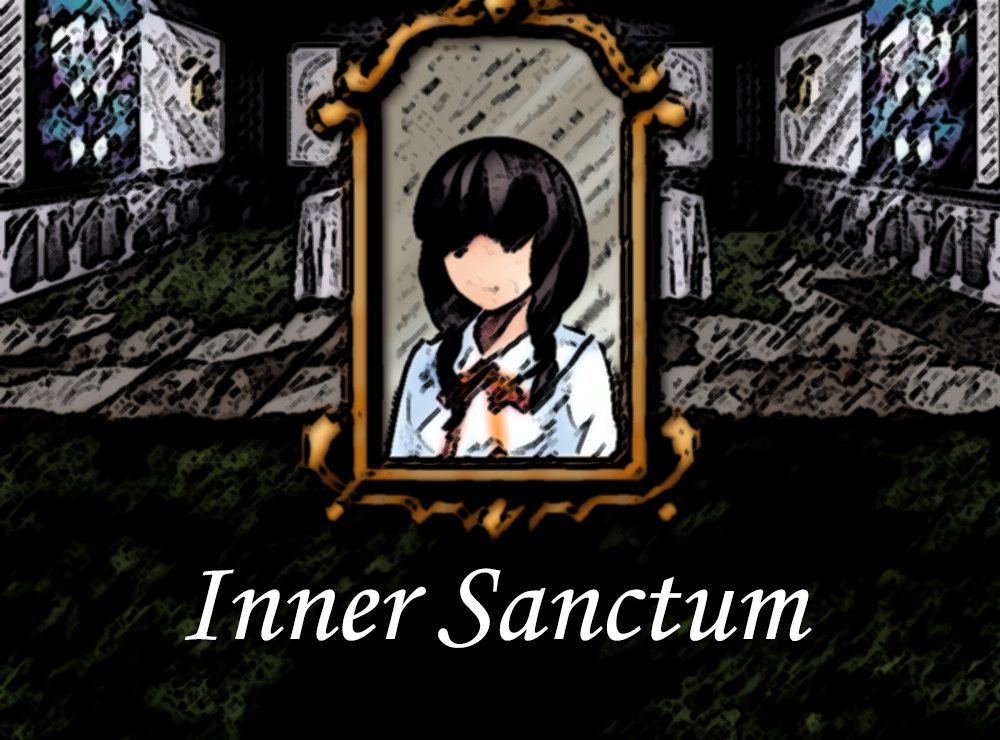 Hello
Inner Sanctum is another horror game by Starmage, made in two weeks for a jam. Unlike the other horror game I played recently, Perceiving Shapes (done with Rpgmaker MZ too) this game is not voiced, but has four different endings, even if I played it only once to get what I think it's probably the best ending possible.
Ok, but what is Inner Sanctum about? 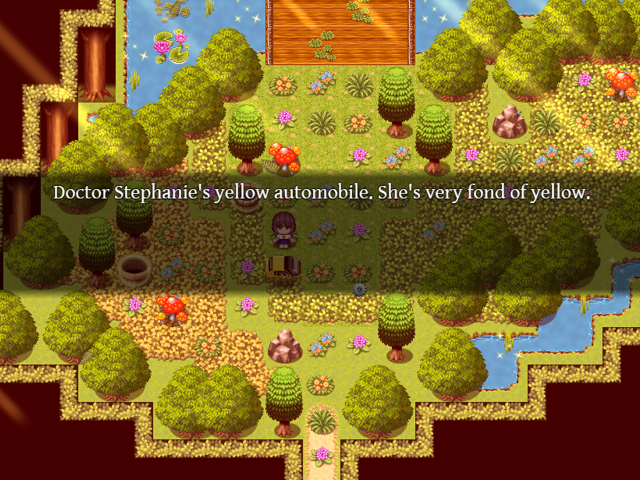 What a tiny and cute car!

The story of Inner Sanctum is rather simple: Meadow is a young girl whose parents are murdered and since she is an orphan she goes to live to a monastery, together with the other seven people that already resides there. During the game we will have to play both as Meadow and some of the other residents while during the night Meadow's past comes to haunts her once again...

Inner Sanctum is a classical short and linear horror tale with many dialogues and some chase scenarios (like Perceiving Shapes, with the medikits that takes the place of the painkillers, but heals exactly like the others), but there are also some choices that will determine who will be alive and who will be dead, and as you can probably guess, this will clearly define which ending you will get.

What can I say about this game? Sounds and some voiced parts are used very well, but what I liked more was the use of pictures. There are many images that I guess are edits or new and nicely fits the rtp-made setting where lights and shadows are well used (mapping is ok, especially the outdoor areas look quite pretty!). I guess that most images are just decorative (you can look at the pictures in the gallery, but this is just part of an optional exploration, like visiting the library... but I like this, try and have fun!). 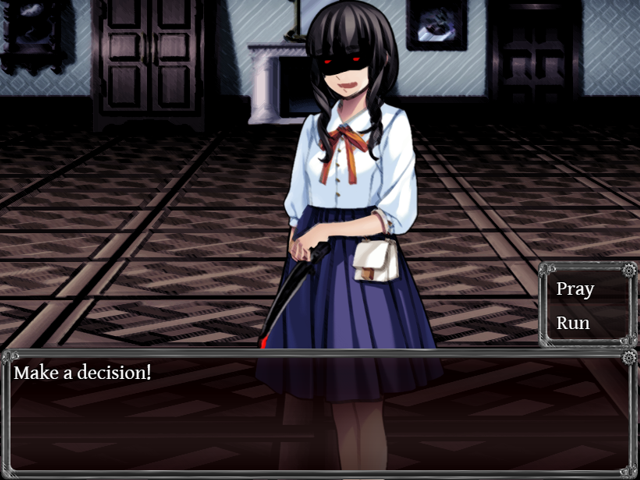 Helpppp! What will you do now?

Now, the gameplay! The dialogues are nice and flesh out the story even if there are some odd choices (more on that in the verdict part). The chases scenarios are exactly like in Perceiving Shapes with the difference that here you do not just have to flee, but it's necessary to reach some key items (four, they are always four) that are used to wound the enemies and defeat them. These items are often vases or buckets, so after a while you will recognize them seeing on the maps even before the actual chase scenario start, in any case do not think this makes the things any easier, considering that you often will have to walk in the dark with your trusty torch, so you first have to locate them (and you cannot leave the map until the enemy is disposed of)! Like Perceiving Shapes if you are hit four times you die, so mind this! But, as mentioned earlier, you will play as different characters, and the death of one or more characters doesn't mean that you will see a game over, just that you will get a different ending! (So far I got the perfect ending, the mediocre ending, and the badass ending in which you get to use the demon hunter Gary. I guess I only missed the bad ending).

Besides the chase scenarios there are some easy "choose-your-adventure" parts where you will have to choose the character's behaviour: just before each of these parts you can save the game and read the character's note, a brief description that talks about the virtues and defects of the character you are controlling, and this short description gives clarification about what you are supposed to do to survive (I only forgot to read Henry's character note but... I was able to win his scenario anyway! I guess I was lucky!). Yes, I admit that it's quite easy to understand he right choices, in fact it's far easier dying during the chase scenarios, I think!
What I found memorable of these parts are the pictures used that were really a good part of the immersion (since the visual becomes often the POV of the playbale characte, and these are also the scenes where their own characteristics comes into play). 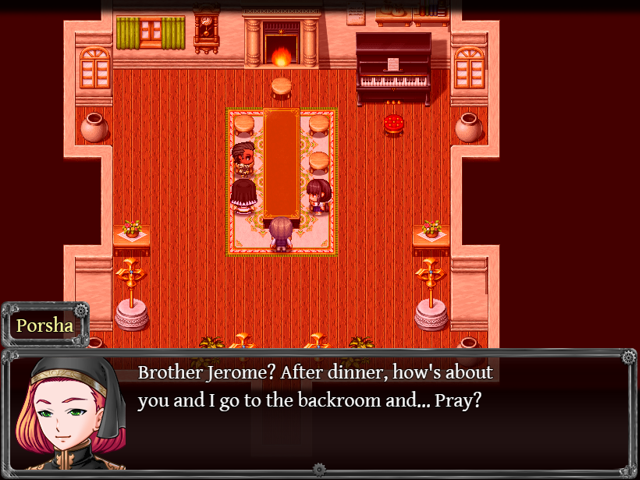 Verdict
Considering that this game was made in a really short time, and it's result, I must say that I am really impressed. The dialogues were also very well written, the only gripe is that it would be great if the games was a little longer and there would have been more time to know some of the characters that are just simply sketched, but hey, this was made in a short time so it's not a problem. I admit I liked the story more than Perceiving Shapes (even if that was fully voiced and I found it graphically more appealing to my tastes), the game is a bit harder but menageable, and I like how it becomes progressively more and more difficult.
There are just a couple of things that were a bit odd, but before I explain please not that it's Spoiler Time!

Show
Ok I admit that the "not so shocking" revelation that the assassin was Meadow herself comes out a bit too early, and I've no problem with that. The thing that really is weird is that the daughter of the keeper (also why the keeper guy has a face mask?) not only knew that but she also HAD A VIDEO!
How, when, where? That part is a bit difficult to accept.
And she did not anything before everything went to hell? Uhmmm ok, I guess!
At least this explain the special death scene you can have right at the beginning of the game if you choose badly...


Ok. Do not read, go, play the game and then come back so you can read the spoiles and tell me if I am right or not! Ok?
Or forget this last part and just play the game, because this is a good short horror game, and if you know the rating here, good means 4/5. Oh yes!

Close
01/22/2021 03:32 PM
Wow!! Thank you so much for this detailed and wonderful review once again, TheRpgmakerAddict! <3 ^_^ :) It means a lot that you enjoyed most of the game! :D And yes haha! I understand you found that issue hard to follow with that plot regarding the child >.< Tbh, I feel like I could've fleshed that out a little more. xD

author=Starmage
Wow!! Thank you so much for this detailed and wonderful review once again, TheRpgmakerAddict! <3 ^_^ :) It means a lot that you enjoyed most of the game! :D And yes haha! I understand you found that issue hard to follow with that plot regarding the child >.< Tbh, I feel like I could've fleshed that out a little more. xD

But I am happy that you enjoyed the game, TheRpgmakerAddict! :D ^^ And thanks so much again for having a reviewed another game of gime!! <3 :D

Heya! Yep I liked this, I just missed one of the four endings... so yeah it eas worth of it. I liked especially the 1st person scenes, really evocative and creepy! Badass ending is my favourite anyway!
Starmage

Close
01/23/2021 03:03 AM
Haha yeah, you probably missed the bad ending which is okay xD :D Its when you die playing as Gary ;) <3 And Im happy you enjoyed it and liked the badass ending! I enjoyed making that part too!! :D Thanks so much again TheRpgmakerAddict! ^^
Pages: 1