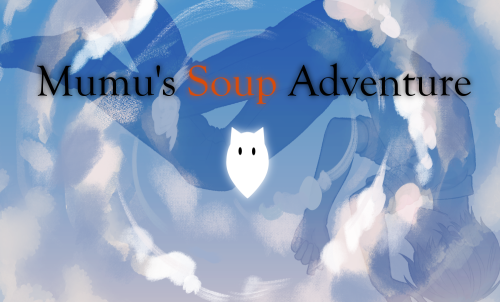 Good monday!
Ok, it's monday now that I am writing this review, but I spent the weekend playing a cute and interesting game, called Mumu's Soup Adventure!
This is a game made by Eggplant, that so far made only short games (at least the ones available here on Rmk.net, of course!) like Doggy Dinner Time (read here) and Too Impatient (read here), and it's the longest one, made of four chapters of about one hour each.
Some common features of the games of this developer (besides being short) were these: custom graphics, no combat, a surreal modern setting, and a mix of dark humor, cuteness and serious themes.

Guess what? this game follows the same route of the previous games.

The beginning is also very reminiscent of Too Impatient, as they both begins with the death of the protagonist! Don't worry because our hero in this game is raised as a... uhm ghost cat! Jill the Candy Witch has already a good number of ghost cat assistants, anyway she summons another one, Mumu, that unfortunately cannot speak, or better he can speak only the language of cats.
All is fine until a particular recipe requires a heart and our friendly witch Jill decides to use Mumu's heart. Since our little hero doesn't want to be dissected, he runs away. 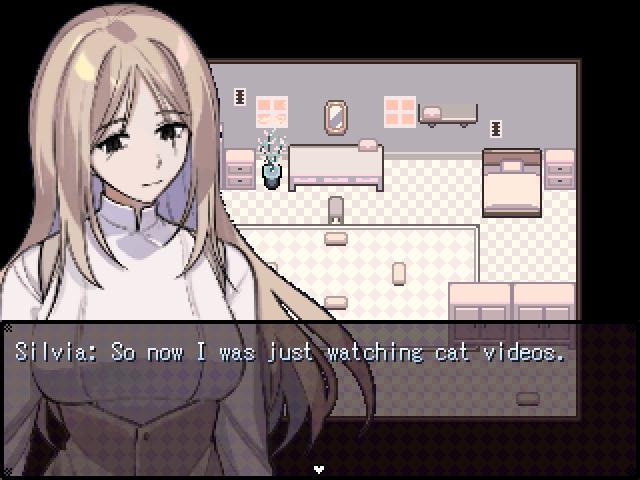 That's a good activity if you have some spare time... besides playing this game of course!

This the beginning of a series of different adventures for our little hero, different adventures that if taken separately can be compare to the previous games by Eggplant, since they provides different settings, party members and situations: we have to help a boy leaving a forest, a schoolgirl catching a ghost, assist a widow in her villa and so on... each scenario is self contained (each has its own location that cannot be re-entered, game is a linear profression of scenarios) but they form a unique story with multiple endings. Like the other games by Eggplant, of course!

Now, the gameplay: here we'll have to complete many different tasks like puzzles and timed "action parts" that includes some chase sections (well this was predictable, since the game starts after the prologue with the chase between the Witch and Mumu!) and timed parts.
Overall difficulty goes from easy to medium, I like how the puzzles are always well though out and never frustrating. It's always pretty easy to figure out what you're supposed to do, as hints are evident. Chases also aren't too difficult, sometimes the pursuer sometimes getting stuck (sigh).
Overall I liked the gameplay, some parts may be a bit challenging (like the last "duel with the white snake" section or the athletic run in the gym) but you can repeat them as long a you don't succeed, unlike others, like the chases, where the game over is what awaits you if Mumu fails. Anyway do not worry, as always Eggplant gave us the possibility to save whenever you want.
Remember to save often since there is no risk to be blocked anywhere (even if the "making coffee" task took me some time!). 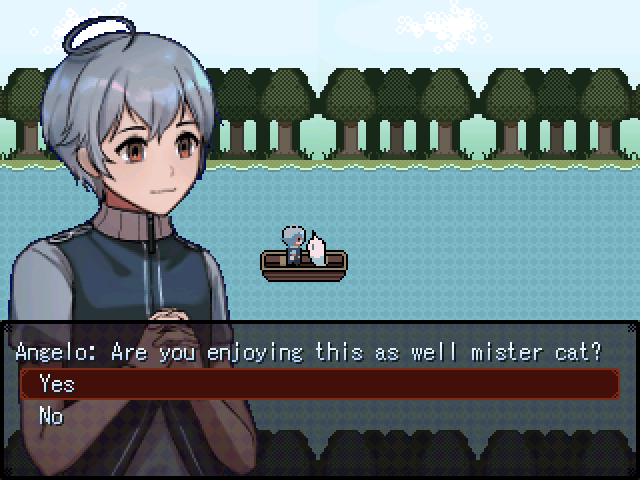 So cute! I'm pretty sure no player could say "NO". If someone can, it's a monster!

Now, the graphics: as usual we have custom f̶a̶c̶e̶s̶e̶t̶s̶... no wait these are really portraits with many different expressions, and are used for all the main characters of the story. Secondary ones are still represented as shapes/shadows (sometimes of different colors, to distinguish them), like in the previous game, anyway the style is as always cute and unique! The game also incorporates some drawings for the most important/emotional parts that are made in the same style of the portraits, and these are very well done, but what about the maps? Well these are pretty simple (especially the forest, for example) but have a charming and colorful appearance, with pastel colors and some little details (like the local fauna, in the case of the forest). They are also pretty much realistic as they represent well the various locations (villa, school, etc) and it's pretty much impossible to get lost.

A thing I did not like is how interactions are a bit random: clearly interactions are always possible when items/people/things are related to the story and the puzzles, but in the other cases it's unpredictable, in the sense that some cabinets/shelves/bookcases have a descriptions (even just a "close" or "empty") and others do not, and it's like interacting to a wall. There are also some minor errors like in the city where the fence overlaps Mumu's head... anyway it's nothing game breaking or detrimental of the enjoyment.

Music: this game uses a lot of classic Rmk Rtp sounds but also music I did not recognize, and I found very nice to listen to, I'm for example speaking about the theme of the school. Then there are also lots of cute sounds, like the meowing when you click on the items in the inventory.

Speaking about the inventory, it does not just contain the items necessary to solve the different puzzles, but also some cut-scenes and dialogues that tell us something about the side characters met in the different scenarios.
Dialogues are well written, but I could not expect less from the developer, the best thing is the mix of irony, humor, drama and cuteness. There are some really scary moments and funny ones, tragic scenes and cute ones, a constant variation of moods that fits a large world populated by different characters and stories. 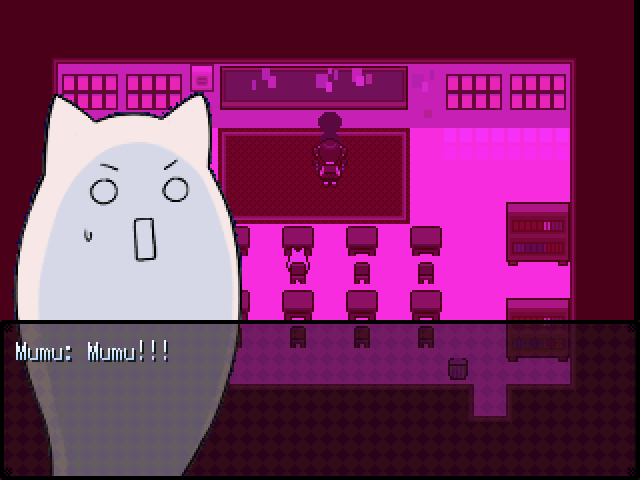 I'm scaredddddd!!!! The Verdict for this review is finally here!

Final Verdict
Mumu's Soup Adventure is a game that does not deviate much from the usual games made by Eggplant, but it's good. No wait, it's better, longer and funnier, despite some small minor flaws (like a couple of typos such as "His hand touched mineS"... but I suppose it's just "mine"). There is a large number of different tasks and puzzles, a variety of simple but cute activities (like taking care of some plants or planting flowers) and action moments (like running away from an undead or chasing a white snake) and all happens inside a framework of stories that are gradually experienced. Ok, some of these stories are a bit predictable, anyway they are cute and well written, and characters are likeable and interesting.
An excellent adventure game, original and entertaining. I liked it very much!

And now, to conclude this review... 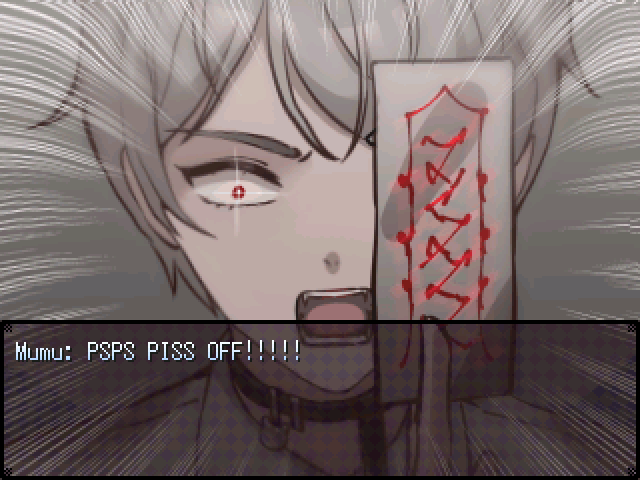 author=Eggplant
Woohoo! thank you for the review *triple backflips*
It's my first serious project (the other projects i've made and shared were just silly short stuff for fun) and I was worried that the gameplay or story seemed too ambitious or dragged on too much (being that it's a pretty long game) so I'm glad you enjoyed it!

Of course there are some flaws here and there, I'll try my best to work on them as well as use this feedback to improve the quality of my projects in the future :DDD

Yeah, this was really *SERIOUS* and that's why I loved it. I mean, I liked the previous games too, but they were so short, this instead was of the right length, not too difficult (even if some action section were challenging!) and sill very fun!
I mean I liked the puzzles , there were many and all different.

The hardest one? Making that iced coffee! Lol!
Eggplant
1748

Close
05/19/2022 06:09 AM
Woohoo! thank you for the review *triple backflips*
It's my first serious project (the other projects i've made and shared were just silly short stuff for fun) and I was worried that the gameplay or story seemed too ambitious or dragged on too much (being that it's a pretty long game) so I'm glad you enjoyed it!

Of course there are some flaws here and there, I'll try my best to work on them as well as use this feedback to improve the quality of my projects in the future :DDD
Pages: 1