Teishi tale, I need to pay rent or I'll be kicked out of my house?!

From zero to... ̷h̷e̷r̷o̷ homeowner

"Teishi tale, I need to pay rent or I'll be kicked out of my house?!" is a very long title, maybe not the longest, but yeah it's pretty long. And npw you would ask, "the title of WHAT?" Well that's a game, made by JustAShyDoge & Liberty for the... you probably guessed that (if you read the part reviews, of course) ... Swap in 3 Middle with You event!

Taishi is now eighteen but she has to pay the rent, unfortunately that's a lot of money and she's poor. Sigh. But there's always something to do in a little fantasy kingdom oppressed by an evil overlord, isn't it? It's time for adventure... and maybe rebel agains the cruel tyrant. Or not! You can just spend your time peacefully fishing, gambling and trading until you have enough money to pay your debt. But if you really have no qualms you can also steal from the other people, I mean... if someone has to suffer, well better them than us, or not?

"Teishi tale" gives you this freedom, but everything starts with some initial steps: to be able to fish you need to have money to buy the instruments, to be able to travel you need the permit of the guild, and so on... it's obvious that Teishi has to work, but unfortunately for her, she starts as a pennyless weakling with no skills of any sort! But you, the player, can make the difference and find a way to solve her problems... well, maybe! 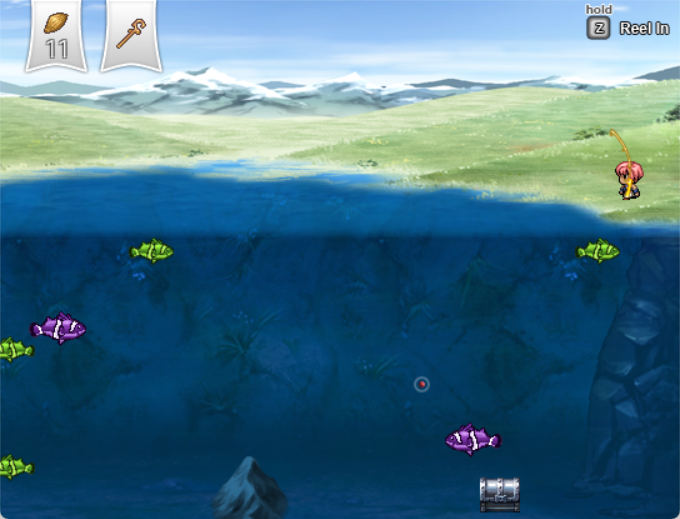 Fishing minigame!!! Because... why not?

Oh remember to save often, because it's possible to die easily in the beginning when Taishi is still weak and lonely, there is an enconter where it's impossible to run away, and if you cannot win, it's game over! I also had an issue with getting stuck on a tree in a particular area, when travelling sud towards the camp. So save, save and save. That's good for you, especially if you want to try different things with the money you collect: spend them all to build a strong party? Use them to trade and amass all the gold you need? Invest them to become the best fisherman?

Anyway luckily the game is not too difficult and pretty fun since it forces you to explore, interact and choose what to do in some situation. Being a game made for an event it's rather brief and simple, still I'd love to play an expanded, bigger version with some more villages, monsters, playable characters and shops... oh yes, shops are really free and I did not find any place to buy gear like armor and weapons or even potions. And I found just one creepy guy that buys items. And also what's about the house in the woods? Is it possible to access it? This is still a mystery for me!

I admit that I was rather dumb since at first I did not find the guild (that's located inside the inn! I expected it to be in a separated location) nor the place with the nun, because I didn't noticed the passages. But well, aside for this mapping is pretty good, it's a compact world but with different landscapes like the plain, the forest, the snowy city... again, this is minimal, due to the time restraints of the contest, but all looks detailed and well presented despite the use of resources that aren't original or new (monsters in particular are classic slimes, giant spiders and rats battlers already seen in many other games). The first areas of the game look particularly cured, while the later parts (once you leave for the forest, the plains and beyond) are a bit less detailed but they compensate with a more powerful atmosphere.
Wait... there was one thing I loved of this game and it was the music! The theme of the forest and especially the one of the plains were simply fantastic. Uhm I know, I'm often ignorant about the sources of musical themes, anyway in this case I really liked the choices and I'd have stayed there to listen them again and again. Well to tell the truth I'd have also repeated the farmer's quests again and again, that was another part I liked. 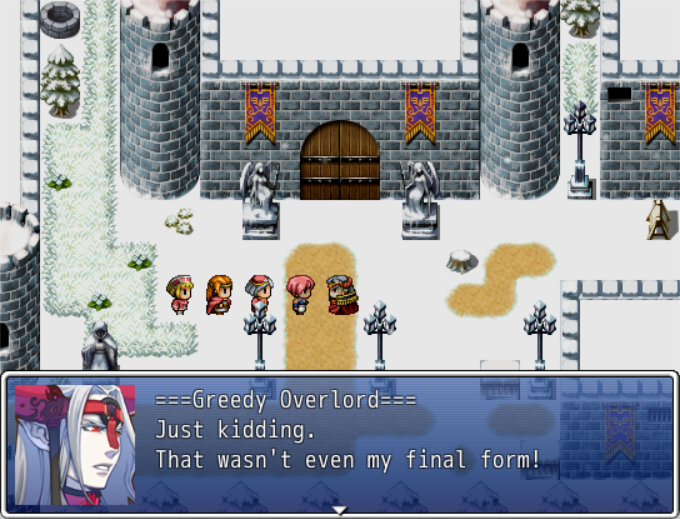 Teishi found some allies, but maybe facing the big bad wasn't a great idea... will she survive? Play and see...

Final Verdict
"Teishi etc etc..." usurpassed my expectations: I mean (taking in account that's an event game) I was here for a simple adventure with maybe some combat and classic (boring) fetch quests, and no, I found minigames like fishing and harvesting, riddles, trading (that I will later exploit to see if it's actually possible to pay the rent... since I chose the hero's way!).
This is a game that has a bit of everything, from quests, to gambling to traditional battles, including a boss. A real mini-open-world, I shall say, and maybe an idea that can be expanded, with more time available (for more quests, monsters, bosses, locations and so on). But yes, I was impressed by the variety of the content and how all these different features and activities works well together giving form to a more open-ended experience. Good idea, and also well realized.

Close
09/27/2022 06:26 PM
It is indeed a great game and Pudding managed to quote succinctly finish what Libby started.
Liberty

Also about the house in the woods:
Show
It's actually an optional cleanup minigame with an ending/free equip once you completed all the required quest in the guild and visit the guild's 2nd floor.
TheRpgmakerAddict

author=JustAShyDoge
Thank you for the amazing review!

Also about the house in the woods:
Show
It's actually an optional cleanup minigame with an ending/free equip once you completed all the required quest in the guild and visit the guild's 2nd floor.

oook! Because if you visit before it says something about cleaning but actually it's not possible to do anything. Heh I will try this now then! ^_^ (since I suck at riddles and puzzles lol).

Oh and the first time I also TOTALLY MISSED the guy that sells skils, BUT I was able to defeat the final boss just with a totally useless Teishi (aka: 0 points of damage with each attack!) and friends. It's really true, the Power of Friendship is the best power!
Pages: 1