Once again it's potato time!

Hello!
Welcome to Spudposal, a new adventure game of Colonel Potato made by Crashykk (this time for the Tape#2 event), and direct sequel of the first... wait, this is not "Spudposal 2"! Well, that's because the first adventure was Klaustastrophe and you can see my opinion if you CLICK HERE! Looks like a pop up, I know! But it's funny noticing how I ended the previous review with "what will happen next?".

The answer is: this game! And I'm happy to see that this is a totally different adventure! While the first was a puzzle action game, this is an adventure platform story, even if it features some old friends and foes from the first game. But as usual, let's start from the plot: Colonel Potato won, and now that he has found love, a beautiful bulbous (that's exactly what he says!) lady, he needs a ring to get married. But how?

What follows is a simple adventure: complete tasks, get items and find a way to obtain a ring through an adventurous quest. The game is super simple: you move around, jump and interact, items are automatically earned and used when needed. 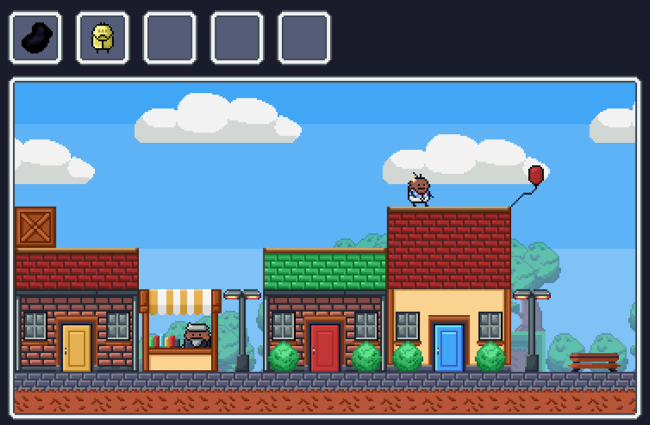 The red baloon is finally mine! All mine! What do I need it for? No this has nothing to do with a popular clown of the sewers, trust me!

There is exactly one save point, but I assure you I completed this little adventure in exactly 27 minutes! And... uhm I must admit that I lost some time due to a "red herring"... I won0t spoil but just say a word: hamburgers! And hamburgers reminds to me one bad thing: the vendor (that was also the first boss of the first game) has a cut dialogue. Pity. Also in the mines you can have the dialogue with the miner in every spot... weird!

For the rest no other issues, bugs or problems at all, maybe the music that is a bit repetitive but uh ok. And some jumping sections that require some skills anyway in the end this game is far easier and more relaxing than the first one. And I had fun once again.

Graphics, like all the other assets, are custom made and use the same colorful cartoonish style of the first game, even if Colonel Potato no longer wears an uniform or has a gun. Anyway cool game, I hated a bit the giant tree but... not as much as some parts of Klaustastrophe! This was a better game (more enjoyable, less frustrating), in my opinion, even if has nothing in common with the first except for characters and story of course. What else? that's all I guess!

Final Verdict
A cool little super-simple adventure game that I don't wont to spoil since it's about solving some little task and give items to the right people. All tasks are logical and there isn't a big world to explore, so it's unlikely you'll get lost or stuck. Except maybe due to some characters that are present but are NOT useful to the adventure, and you may waste some time with them. Yes, not everyone is important for your quest, and you have to jump around a bit to complete this adventure.