5 reviews
Save to Dropbox
Everything… is everything in our existence just a replica of someone elses?

Hi All, I bet you're all wondering where this notif is coming from and why.

Recently I've waxed nostalgic over the game, as it's now less than six months to the game's true 10 year anniversary (2.2's upload date was Feb 2012 I think), as well as some new people coming into play the game. Although it has been 10 years, it seems Cosplay Crisis still attracts new players from time to time, even though they don't interact with the gamepage.

This brought to my attention something: the use of the word "r*tard" in the game's intro. This is a pretty serious slur, and I had entirely forgotten about its presence, but seeing it I felt a pang of guilt and disappointment in my younger self.

I obviously don't speak like that anymore, and while I could make the excuse of it being a 'different time' back then, honestly 2011-2012 it was still a pretty shit word to use. Kumo, the culprit, isn't exactly a thoughtful noodle about it either, and I have a vague recollection of putting it in to reflect the fact he can be kind of a dick, but regardless of my intentions it has no place in the game at all, and especially not one that is not countered or addressed as being shitty by the rest of the cast.

So, if you saw it and felt hurt by it, by my use of it, I apologise, deeply and sincerely. It was wrong, I was wrong to use it, and I completely understand if you choose not to forgive me for it, because there are no excuses. Please do not try to excuse me in the comments here, nor do not accept the apology if this meant nothing to you - it is not for you. I should've known better, and that's the long and short of it.

My gut tells me there are probably other examples somewhere in the game. I could very much just upload a version with those pieces of dialogue removed, but...given the state of the game, I might as well do another bug purge, fix up mapping errors, and repair any incongruities in the narrative, if I'm in a position of obligation to upload. I still remember exactly what the plot was, ten years after the fact.

So consider this a formal announcement of an Anniversary Edition/3.0, which I'll release 10 years to the day of 2.2's upload. More likely than not, I'll still have bugs. The fact the game runs is a miracle in and of itself. But it won't have frankly alarming and poor word choices which'll be nice.

I'll save any further details for later, as the first part of this is really the important bit, but feel free to ask questions (or request features?) in the comments below.
We'll kick your ass THIS time around!

-the gear screen would be nice if the weapon,armor and accessory were all together theres a 3-4 line space

-when do you get a gift for joining a fan club?

-at gold saucer talking to the shop keeper changes there appearance

-zombie part was extremely painful with no insight on where to go you could wander for over a hour looking for where to go even tho i found the subway thing and figured i could go in it wasnt until a couple trys that i figured out the right side is how you get in :(

-everything about tokyo is wrong lol stores being closed with people in them,people being in them when everyone should of been dead,no tokyo tower o.o

-finally got past the subway part but another flaw being that there are soldiers in this area which contradicts the girls you fought earlier saying that they are protecting people from zombies.

-also during zombie part area with the bike,car and save point there is a box south west side of the room,cant open it.

-wth!?after fight with Aio and heading to mountains north of tokyo you can randomly use a flying ship!?(by pressing shift north of blue moutain)when did you get this!? seems if you land on another island or continent your stuck there

-should be able to save on world map

-after zane joins your party he is still in the hotel in your home town not only that if you go to your apartment at this time it replays the scene that your leaving for tokyo
//
complaints aside this was for the most part enjoyable...but the terrible directions are to much sometimes

ok the early ship glitch aside lol...
yay i got a ship! :D
the terminal is pretty cool but the images folder could of used a fix(cant bring cursor over most folders)

the glitches aside this is a great game
id give it 4/5 stars just cuz of the glitches
other then that with the length and content you must of put a lot of time and work into this great job!
//
//
For those who want to play the game but its to hard here is a game save that takes place after the zombie apocalypse and right after you get the Ragnarok(in open world use shift to use)
http://www.4shared.com/rar/yA3nk-4Aba/Cosplay_crisis_gamesave.html

Close
05/06/2019 11:50 PM
Probably way too late for this, but whenever I get into a boss battle, there is either no music or background noise. I've played many games and have not encountered this issue.
Puddor

author=Alastair
Probably way too late for this, but whenever I get into a boss battle, there is either no music or background noise. I've played many games and have not encountered this issue.

Which music did you pick to play (7,8,9)? IIRC, FF9's is bugged. I'm not entirely sure why at this stage, as yeah, it's been a number of years since I've touched this game.
Addit

author=Puddor
IIRC, FF9's is bugged. I'm not entirely sure why at this stage.

*psst* (…I think I know why: It’s because Puddor is more bias towards FF7 and FF8, so that’s why FF9 got the short end of the stick here.)

author=Puddor
IIRC, FF9's is bugged. I'm not entirely sure why at this stage.

*psst* (…I think I know why: It’s because Puddor is more bias towards FF7 and FF8, so that’s why FF9 got the short end of the stick here.)

author=orochii
What happun to gamepage title image thing? :< Second gam I follow has some problem with its title image / banner / whatever.

Seems to work fine for me?

...but I'd say its because it's a Photobucket image. RMN gamepage backgrounds/headers, especially on games this old, are all hosted externally.

I'll see if I can find the original and reupload.
LadySalya

Also Once I beat the game, I plan on doing a let's play of it, if that's okay with you Puddor. Edit: I'm doing one now just for fun. xD
Puddor

author=LadySalya
I LOVE this game but I'm stuck. can someone PM me the passcode in the Omniax HQ? can't figure it out and I been trying for a good hour.

Also Once I beat the game, I plan on doing a let's play of it, if that's okay with you Puddor. Edit: I'm doing one now just for fun. xD

Hello, I'm happy to help out but I'm not actually sure which password this might be (it's been a hot minute!) any chance you could post a screenshot of the area asking you for a password, please?

Feel free to let's play it! Regardless of the state its in retrospectively I'm still pretty proud of this accomplishment.
LadySalya 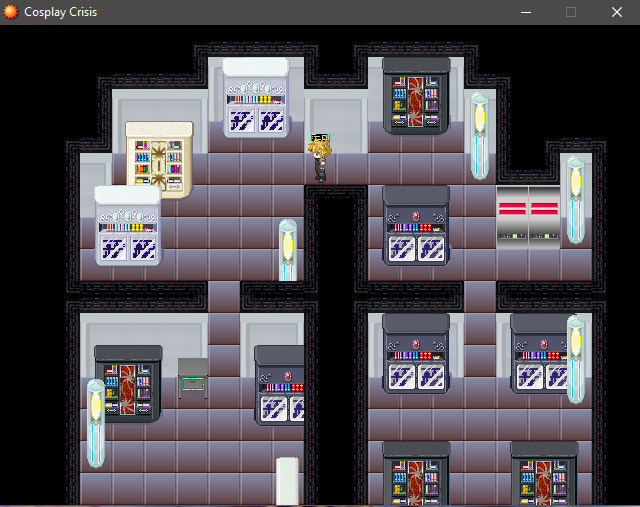 I know that its a 6 letter pass but I tried almost everything from the misspelling and such in the datalogs.

yay I don't mind how retro it is, I love it. Plus you added three of my most favorite FF games all in love. XD
Puddor

Show
So yeah the hints are in the misspelling of the files: