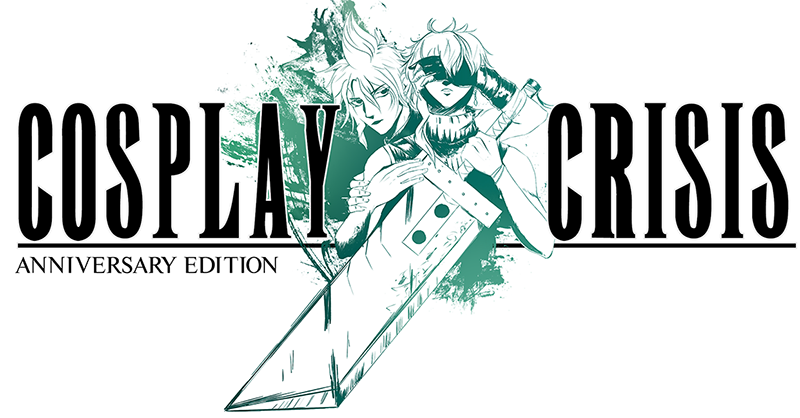 5 reviews
A Final Fantasy fan-game with a twist...

A seemingly normal life. An average existence. That's all Kumo Atsureki has ever strived for, as the sole guardian of his younger brother at 19. Working as a hired gun with a young man named Levi Raionomoi, his long-time best friend, they work towards a future where they can do what they like rather than working for the highest bidder.

That's about to all come crashing down when their childhood friend Miri Joumaeshin, co-leader of the rebel movement LANDSLIDE, asks them to aid in bombing a Okam Reactor as a favour, something they can't say no to.

Oh, and a casual trip to Tokyo for a...cosplay convention, of course.

Things are about to get very, very messy, as the fragile 'normal' existence becomes a thing of the past and they become the only hope to save the world.

That is, of course, if they can save themselves...

Cosplay Crisis is a complete full-length RPG (stemming upwards of 10 hours in length depending how you play). If issues DO crop up, please check this list of unfixable bugs before submitting a bug report.

-Anything with materia.
-You cannot save on the world map. This is intentional - there is a save point in the terminal on the airship bridge.
-The 'Blasting Zone' animation appears over the Battle Status. I fiddled with it far too much as it is, so I left it.
-Common event skills don't update the battle status straight away (1000 Needles and Shock). I tried to fix this, too, but couldn't fathom a way to fully refresh the battle status through the common event call...so it has been left.
-If you use a Kumo/Levi limit break while critical, the characters won't reappear immediately. I'm not sure why this is, and haven't got a clue how to fix it.

or hassle liberty to add the category of squallbutts, as this game qualifies

if you weren't aware that levi's bare ass was in this game, now you are
ANNIVERSARY EDITION: Kumo's Apartment

For the game's main image.

Close
03/07/2010 02:57 AM
@Dezz123: Yes, the demo version doesn't have the updated titlescreen because I hadn't finished it at that point in time. The demo was released back in July- a lot has changed since then.
@Vanisher: If this game didn't have Squall, it wouldn't exist. If I make an FF fangame Squall's going to be in it.
No questions asked :D.

Close
03/08/2010 02:04 PM
I found a Glitch, when you go to the place after the bus stop i defeated sepherophs robot and walked into the Gypsy's tend and became squal, i left that place and walked back in and the same cutscene happend over and over again with 2 squalls hahaha.
Vanisher

Close
03/09/2010 07:18 AM
Both of those issues were mentioned in 'Demo Info' I'm pretty sure. The reason it can't find a music file is because that scene wasn't completed. And that cutscene...I forgot to turn on a certain switch. I was in a hurry to release the demo and I'm sorry for that. Those scenes are pretty much redone now, heh :/
Vanisher

'After you start playing as Levi, don't go up the stairs in the Wonder Circle. Just don't. You'll crash your game. '
That's for the music file.
As for the scene repeating...
'you could enter the fortunteller again when in control of levi, the whole scene will repeat again. '

I'm sorry, I would've fixed the demo but I restarted work as soon as it was released and the demo seen here basically doesn't exist anymore. Everything up to getting to the Subway has been redone. I couldn't find a decrypter so I could fix the bugs in this demo, so I'm just going to release a new one.
I aim to have it done by next week. Stay tuned.

Close
03/10/2010 07:10 AM
Ty very much for this information, and the descriptive information, sorry for the double post too i accedently clicked the post button twice haha.
Puddor

Don't worry about the double post I did that the other day too D:.
deboo