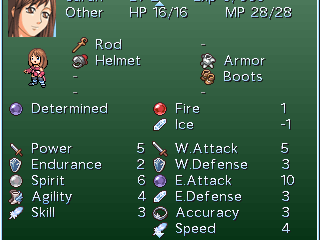 Bro do you even stats?

Close
08/22/2014 09:38 PM
You get to pick what is shown here and what isn't. Only applied elements and traits are shown (non-zero element ratings). You can see from the arrows above and below that, if the stats won't fit on one screen, the user can scroll up and down to view.

The visibility of attributes and derived statistics also will apply as you check equipment. It will show only the stats that change and what they'll change to (to simplify a system that could run on anyone's RPG system). It will also let you know what elements and traits are applied.

Why do I have to list Agility if you're already told how your Speed will change? What if attributes calculate out differently for one character than another somehow? I don't know how many of you realize that almost anything is possible from such a simple concept of having event scripts as statistics- even with just 3 lines or so of commands.
Conmon

It makes me mad that I don't have anything else to say. This is just too awesome!
Pages: 1