author=LockeZ
Parties interested in working further with this simulation should checkout Atoa's Chrono Trigger Battle System for RPG Maker XP. This battle system allows for a virtually identical recreation of CT's battle system, including support for enemy movement patterns and animated enemies/allies. Due to the use of scripts, it is vastly easier to work with than events in RPG Maker 2003.

The purpose of this project was to faithfully recreate The Millennial Fair battle from the SNES RPG "Chrono Trigger". This would allow players and fellow rpgmakers an opportunity to take a critical look at the aesthetic limitations found within the default battle system of rpg maker 2003:

By attempting to aesthetically recreate the battle system of Chrono Trigger in rpgmaker2003, players would be able to assess these limitations and examine possible solutions within the maker, which they could then apply to their own rpgmaker projects.

i.e. rpg maker 2003 only allows a maximum number of 8 sprites to perform battle animations; the musical notes that are seen in the animation "Gato's Song of Love" are thefore omitted due to this limitation: The purpose of this project is not to solve these aesthetic limitations, but to be made aware of them, while still remaining faithful to the aesthetic nature of Chrono Trigger.

Tutorials used:
How to make chipsets from SNES games by tacox

Enemy's behaviour is also relative to current position on the battle field.
i.e.

-Gato rescends into the background to perform "Song of Love"
-Gato approaches enemy to perform an attack.
-if Gato is attacked while in close quarters, reprisals player.

RM2k3: All enemy movement is static within the default battle system of rpgmaker 2003. Therefore Gato's behavior or "Enemy AI" is ommited due to this limitation.

RM2K3: allows a maximum number of 8 sprites to perform battle animations; the musical notes that are seen in the animation "Gato's Song of Love" are therefore omitted due to this limitation 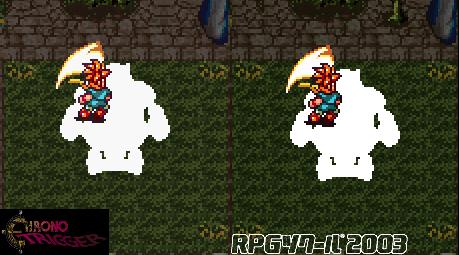 RM2K3:Complex battle animations such as "Cyclone" run at a lower framerate within rpgmaker2003


Conclusion: In order to faithfully recreate Chrono Triggier within the default battle system of rpg maker 2003. Either plan each individual enemy encounter, taking into account, party members as well as their individual positions on the battlefield or ideally, recreate each animation so that it adheres to the "side-battle-view" perspective of rpg maker 2003.

There were a couple of things I would have liked to fix/add to this project, such as Gato's/Gonzale's alignment on the field, so that the game itself would be a true 1:1 comparison study. But that would mean having to realign all the battle animations -which I probably could do if I had a bit more time- but I decided to release this as it is anyways, simply because I'm tired of working on this project.

Other than adding a defeat condition to the enemy encounter, for the most part this project is essentialy "complete". But If anyone would like to add anything else, say a Custom Map System, feel free to open the maker.I myself, would have liked to change the font so it would be identical to the one found in Chrono Trigger. But exactly how I would go about doing that is beyond me.

Overall, what I had hoped to accomplish with this project was to encourage players and fellow rpgmakers to take a closer look at the games which they are trying to emulate; There is a certain amount of finesse involved, that should be taken into consideration as we savagely rip these characters from their former virtual worlds and hoard them into our own. It's not just about how their sprites essentially look, but how they move, the subtly in these movements, that make them not only recognizable but believable as well:

I think you'd be able to get even closer.

Close
05/07/2011 02:17 AM
Parties interested in working further with this simulation should compare Atoa's Chrono Trigger Battle System for RPG Maker XP. This battle system allows for an extremely exact recreation of CT's battle system, including support for enemy movement patterns and animated enemies/allies. Due to the use of scripts, it is vastly easier to work with than events in RPG Maker 2003.

I seriously applaud the amount of effort it took to get this working in RM2K3, and how amazingly close you were able to get. However, I probably wouldn't want to make an entire game this way.

You mentioned the font also, so I thought I'd point out: The Game Font Database includes a Chrono Trigger font (which I drew myself in a font editor, based on screenshots of CT). However, it is a TrueType font, and thus will work in RMXP and RMVX, but probably not in RM2K3 or RM2K. I'm not sure what all patches exist out there for RM2K3 though - there might be one to let it use TrueType fonts of the designer's choice.
Rowan

Close
05/07/2011 02:59 AM
With the true intent of this game aside; overall, this game was pretty fun! Even if it was just one battle, I'm thoroughly impressed!
LordBlueRouge

author=udivision
If you weren't already done with this game, I'd suggest using RPG Maker 2009.
-Pictures in Battle
-125 frames in a Battle Animation
-and a lot of other stuff I can't seem to remember.

I think you'd be able to get even closer.

When I first started this project, I wanted to see how far one would be able to push the default battle system of rpmaker2003 without succumbing to modifying the maker itself. Having said that, implementing rpgmaker 2009 would somewhat defeat the purpose of what I had originally intended for Chrono Uncanny, but I'll definitely take a look at this.

Adding in Tech Skills that involve more complex battle animations such as "Luminaire" or "Confuse" would be virtually impossible or at least terribly foreshortened, without such a program.

The battles themselves seem to be a stage for these really great battle animations as the player and the enemy interactive with each another from wherever they're placed on the field within the confines of an ATB system. Rather than being monotonous, incessant and erractic, all encounters with the enemy in Chrono Trigger are predetermined and concise with absolute no transitions.

This seamless integration between initiating an Active Time Battle upon the very field the player explores is the essence of Chrono Trigger and to my knowledge there really hasn't been another game quite like it, a game that becomes essentially flawed when recreated in rpgmaker 2003.

What I hope for players take away from this project is that rm2k3 is primarily intended for games that incorporate a sideview battle system, games whose battle animations are limited. Games such as Final Fantasy 4, Final Fantasy 5 and maybe even Final Fantasy 6. This is the spirit of rpgmaker 2003. Anyone willing to create an rpg in rpgmaker 2003 should embrace this format and where possible, exceed it, rather than force what was never intended upon the maker.
Pages: 1