2 reviews
Save to Dropbox
Iniquity and Vindication is a game about James Brandt, a man with a grudge against the Tekistan Empire. He wages a personal war against Lord Justice, the comically inept villain who tries his best to be evil but just isn't very good at it. The Tekistan military has begun secretly experimenting with paranormal artifacts, several of which James and his allies have stolen. As the game progresses, comedy is mixed with action and drama as dark forces enter the fray and James's resolve is tested. The player's mastery of the game must grow as challenges become extremely tactical. Enjoy fighting sharks with frickin' laser beams attached to their heads.

Features:
- Battles use a lightning-fast battle system geared to work strategically like CTB but look visually like ATB, and occur on the field map, Chrono Trigger style.
- Eight major playable characters, each with a vastly different combat style and with their own method of learning new skills. (Lightbulb, Blue Magic, Hex Grid, Monster Soul Absorbing, etc.)
- Removal of repetition. If you beat a challenge once, you won't be given that same challenge again. This not only means no random battles but also no basically-identical battles. This game isn't about grinding, it's about figuring out how to win.
- Puzzle-filled dungeons, in which you must cleverly use various tools collected over the course of the game to bypass obstacles.
- More bosses than you ever thought a traditional RPG could have. Just about every third or fourth battle will be a boss. That's not an exaggeration.
- A blend of action and absurdity, with a focus on comically over-the-top action scenarios.
- The opening scene starts with the hero being slowly lowered into a vat of lava sharks.

This game is currently in early production stages. A two hour long demo is available that lasts through the end of the third dungeon. I'll be updating the blog as I go.

Iniquity and Vindication is a sort of spiritual sequel to Vindication. It features some familiar-seeming characters and similar events, but it is not set in the same world and there is no continuity between the two games.

It's been a while since I paid any attention to this game, but I've been working on it as for the last week as part of the Revive the Dead event going on this month on RMN. The goal of the event is to take a game you stopped working on and revive the project and finish it. Since I had done maybe two days of work on this game in the last two years, it definitely qualified.

Over the last nine days I've done about 40 hours of work on Iniquity and Vindication.

Spent all day today replacing placeholder ripped tiles with original tiles instead of making new content. This is probably not the best way to get a lot of visible progress done this month that I can actually show off. 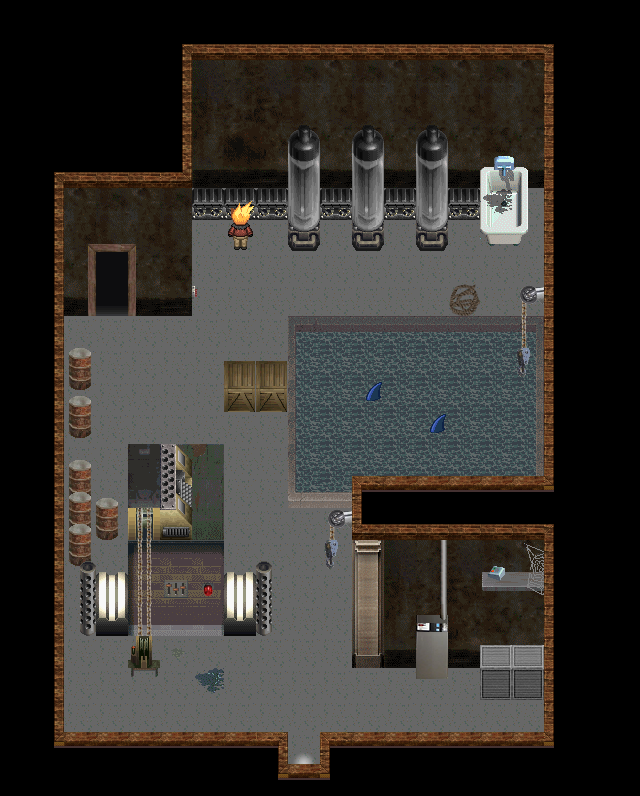 Still need to redo the conveyor belts and one or two little things, then I'll have legal rights to actually use all the graphics in... this particular map.

The massive number of rips in this game and my inability to sell the finished product when I'm done was definitely a major contributing factor to my losing motivation to work on this game. The gameplay was so good; it deserved to be a real commercial game and not just a shitty collection of Tales of Phantasia rips.

With any luck, that'll be the end result.
Sewer surfin'. James riding on a shark, while fighting sharks riding on surfboards and crocodiles. The background is a looping panorama that rapidly scrolls by during the high-speed battle. This is the last battle in the Shark Factory.

A naval base that you sneak into.

Lord Justice, ruthless dictator, holds an important cabinet meeting. To keep his cabinet's attention, he has strapped them all, including himself, to a live intercontinental ballistic missile for the duration of the meeting.

The first floor of the home of James, the main character, shortly before it's invaded by a squad of army homewreckers.

Close
03/01/2011 08:04 PM
Everything looks great man.
I've been wanting to play this since you posted that video somewhere in a thread.
NewBlack

Close
03/27/2011 08:24 PM
Sorry. If I had someone making enemy sprites/animations for me, this would go 10x quicker. Graphics are my bane. They were so much easier in Vindication, because I didn't realize when my graphics looked like crap, and thus I had no reason to spend extra time on them! With great knowledge comes great responsibility, though.
Decky

Close
06/06/2011 02:19 AM
Yeah, now this is an RMXP game that should be completed. Comical story, unique style of game play, a battle system that requires a bit more thought and can prove to be a challenge, even though you do get healed after each fight. My only gripe is that after about the third or fourth shark battle, it sort of becomes repetitious.
Nightowl

Close
09/09/2011 06:50 PM
If you've played any of the SaGa games (other than the original three for the game boy), Lightbulb is similar to how weapon skills are learned in those games.

Each time he learns a new skill, a lightbulb appears over his head, like in the SaGa series; this is where the name of the learning style comes from.

If you play the demo and manage to learn any new skills during it (learning the second dark skill is almost guaranteed) you will see a tutorial that explains the above.

Warning - trivial algorithm details ahead:
Show
In most of the SaGa games, you can potentially learn any skill at any time, but you have a higher chance against stronger enemies. I felt that such a strong degree of randomness could break the game's difficulty if the player were really unlucky, so I opted for a kind of hybrid approach in Iniquity and Vindication. In my game, you can't learn any ability at any time. Instead, each ability you can learn requires you to use your existing skills a certain number of times before you're even eligible to learn it. So, for example, to learn the third dark skill, you might have to use your existing dark skills a total of 150 times. Once you are eligible for it, each time you use a dark skill you'll have a fairly high chance - about 10-25% - of learning the new skill.
Melkino

Close
09/19/2012 09:05 PM
I don't mind if people look at it for learning purposes, it just bothers me when I quickly recognize my coding style copied and pasted on other people's pages.
I spent a lot of time putting it together, mostly on color picking and IE compatibility
LockeZ

Close
09/20/2012 04:25 AM
Your CSS code was pretty, but I changed it to something else. Now it kind of looks like a pile of smoke-textured donkey turds got smeared all over the page, but I'd rather work on the game than change it a third time this week. I'll redo it again when I get a chance.
Clareain_Christopher

meisam your not using semicolon properly, and that's a laughing matter.
0

Close
06/20/2013 10:52 AM
Wow my dream game, that's really amazing. every single thing I want from a game (well except a meeting on a Missile and a helicopter that lift a whole house :P) is there, challenge and puzzle like battle sometimes even attack is a useful command, congratulation. I hope you finish this about three month from now :P. I also liked detective victory animation it was very cool, it's already my favorite character (not only because of his victory animation :))

about bosses.
last boss was too aggressive this means randomness can ruin any tactic you throw at the boss (also it's a good opportunity to grind skills). he don't care for his life until last moment of his life, and that can be countered with a stun.
boss before that is too defensive (the woman with the wind), there is absolutely no danger for player. strange is that I really liked that battle (also it didn't had any challenge :-?) somehow it give you a false hope that yeah you are too smart :P. edit: I mean: somehow it give me a false hop that, yeah I am too smart:P
REunfound
4

Close
07/20/2013 04:22 PM
This looks like a rather "unique" game nonetheless, but out of curiosity... why does your character have to look like "Cloud Strife" from Final Fantasy VII (FFVII/FF7)?
LockeZ

Close
07/20/2013 11:07 PM
Heh, I don't think Cloud has a monopoly on spiky hair, but I realize the comparison is inevitable when making an RPG. Spiky hair is a pretty common thing for RPG and anime protagonists to have. The inspiration for it was actually Dragon Ball Z, though I realize that's even worse. I should probably claim it was Chrono Trigger to preserve my street cred.
Pages: first 12 next last