"War of Two Worlds" is an epic length RPG developed by MarkC that features a lot of the usual cliches found in RPGs the world over. Though sadly, this game really started to test my patience after a while since it's poorly thought out and designed in a lot of places. In fact, I was getting so angry at this game that I honestly found it struggle to finish my 80 part Let's Play series for this game and was forced to spend time away from this game every now and again in order to cool off a bit.

To start on a more positive note for this aspect of the game, "War of Two Worlds" devotes a lot of time to fleshing out the backstory to it's world as well as fleshing out its characters early on. This is something that I can definitely appreciate and wish taht other developers would actually do. After all, it's always not to see a world that has a fleshed out feel to it. As if the developer sat down and actually plotted out the history of the game world and how the initial setting for the game came to be. In other words, developers should definitely set a little time aside to fleshing out the lore behind their worlds and putting bits and pieces of them on books you can read on bookshelves or have wise old sages you can interact with to learn about ancient myths or legendary weapons. And while "War of Two Worlds" doesn't have readable books on its shelves you can pick up an assortment of books in the game and take them to your local library in order to read them.

Another nice aspect of this game is that it actually takes time to explain what happened to some of the minor characters in the game in the epilogue. This is genuinely nice touch that I don't see that often. After all, it makes it seem like other characters actually matter and gives you reason to interact with characters in the game in order to find out what ultimately happened to them. Though, I did wish this section of the epilogue didn't include reminders about characters who clearly died on screen or whose deaths were explicitly stated during cut scenes. I'm looking at you Leon and Granheim.

Sadly, my thoughts on the rest of the story only go downhill from here.

If I had to pick "War of Two Worlds" biggest narrative problem it's that the game features some of the worst pacing I've ever seen in a game of this length. And, I've played a lot of lengthy RPGs over the years like "Wild Arms 5". As it stands I'm willing to overlook this issue a bit in the beginning because the developer is devoting time to giving the player backstory and character building, but as the game drags on it starts to feel like the developer is merely looking for anything and everything he can throw in the players way in order to make this game as long as possible. A good example of this in my opinion is that when you defeat Drake at the top of Heaven's Tower he reveals that he still has a divine soul despite having been stripped of his god powers. In my opinion, this plot decision only serves to create a massive plot hole that exists to pad the game out for another three hours or so. And there are definitely other areas of the game that could do with some trimming as well.

Another problem generated by the narrative excess at points is excessive backtracking. This can be especially true near the beginning and middle of the game. Near the beginning of the game you'll be tasked with exploring the same forest about half a dozen times over the course of a couple hours and while I'm exaggerating a bit with that number, it's not as far off as you might think. And near the middle of the game you'll be constantly tasked with working on getting an airship up and running only to be called back to Dracogaia in order to deal with every little problem that creeps up. In fact, I distinctly remember being called back to deal with some minor bandits, an issue that you'd think a guild whose strength is comparable to some kingdom's armies would be able to deal with on their own. 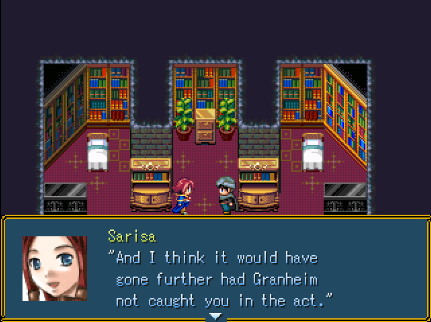 Another plot element that throws a wrench into the cogs is Siddon. Siddon is an absolute scumbbag whose insertion into the party feels entirely forced for no discernible reason. After all, Griffit already wields the same element as Siddon and we already have a character on a redemption arc in the form of Sarisa, the main antagonist's wife.

That aside, I do understand why MarkC wanted to give Siddon a redemption arc. The problem is that MarkC doesn't make Siddon's change from the villains side to the heroes very convincing. And even if it was convincing I wouldn't want Siddon around because of the following issues:

1) The game heavily implies that Siddon sexually harassed Sarisa. A problem that only gets worse when the game seems to suggest that Siddon would have gone even further if someone else hadn't stepped in.

2) Siddon is well known for doing everything and anything he can think off in order to get back into Drake's good graces. This leads to Siddon stealing one of the many keys that Drake will need in order to become a god.

3) Siddon actively challenges the player to several fights and if you lose it's game over. Even when one of those fights is meant to be a friendly sparring match. A fact, which leads me to the belief that Siddon is more then happy to kil This gives the player a pretty strong nudge towards the idea that when Siddon is fighting Kersh and the gang. He's aiming to kill.

As it stands, I really think Siddon needs to be punished for his actions before he can be forgiven. And while I imagine some would argue that's not fair considering I'm not calling for Sarisa to get the same treatment. I'm more willing to be lenient with Sarisa because she genuinely comes off as a passive actor who had no real say in her husbands actions, and when she did switch sides she did so in a very clear and obvious way by freeing Drake's many prisoners.

On the surface "War of Two Worlds" seems to feature your standard active time battle system with random encounters, but once you lift the cover your left with a game that really suffers in a lot of places in my opinion. For starters the game includes not one but two entirely pointless stats. These stats are mind (intelligence) and defense. The mind stat is entirely pointless because your spell damage is entirely related to the level of your spell. As such, your ultimate spell will still only deal out around 2,000 points of damage whether your intelligence was 5 or it was 999. Nor does this stat offer up any sort of protection against spells either. So it doesn't serve any purpose offensively or defensively. This same issue also plagues the defense stat to a certain extent because all of your melee attacks in this game deal defense ignoring damage. As such, your melee attacks will do just as much damage on a low level enemy as they will on the final boss.

This problem only gets worse in my opinion when you realize that the game repeatedly offers the player items that boost their intelligence and defense stat, but these boosts don't actually do anything for the player as I've established. As such, it feels like MarkC is simply mocking the player for being dumb enough to think that their intelligence or defense even matters in this game.

Another thing that bugs me is that melee attacks cap out at around 600 points of damage in this game. As such you'll spend most of your time in the late game slinging around your ultimate spells simply because they deal a little bit over three times the damage.

On the graphical and sound side of things the "War of Two Worlds" borrows heavily from old SNES titles. A factoid, that only bugs me as much as it does because MarkC doesn't list which games he took assets from at the end of the game. Though, I suppose other members of the community would consider this a practice so common that it isn't even worth bringing up. 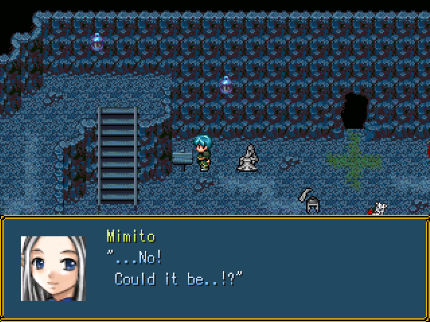 If you interact with this sign from the side it causes the game to lock up after the cut scene. Thankfully, this can be avoided if you read it from the front, but the fact that this bug exists at all really gets under my skin. Since, it cost me around 30 minutes of progress.

Another annoying bug in this game can be found if you get Mia up to level 99. This will cause her to unlock her ultimate spell a powerful gravity attack. This is a bug because the game requires you to track down the gravity orb in order to gain access to gravity magic after the battle with Drake in Heaven's Tower. And this bug can lead to a lot of frustration if you have to listen to the party talk at length about the need for gravity magic when you already have access to it.

"War of Two Worlds" is a game that starts out fine, but gets worse and worse as you progress because it's apparent flaws become more and more obvious as you go on. So much so, that they begin to make playing this game feel like a chore rather then a fun experience. As such, I really can't recommend this game.

Please remember that if you disagree with a review you're completely allowed to submit your own review. More reviews for potential players is always going to be more useful.
Pages: first prev 12 last

Comments have been disabled on this review.