A long, long time ago, back when the community was still young and fangames rarely stepped out of the shadows of Final Fantasies 6 and 7, a new face appeared on the horizon; in his hands... a game. 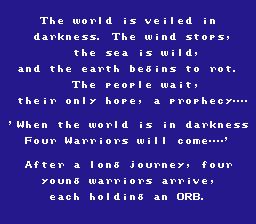 Pretty much sums up the 'sperience.


But unlike many before him, he didn't just go halfsies on the retro (clashing graphic styles). No, Ephiam went full on. What did this produce? One of the greatest and truly old school RPGs ever to grace the RPG Maker scene. Somehow he managed to take all that was good and perfectly replicate it in Rm2k, and the community took notice.

"There's something wonderful, to me at least, about 16-pixel tall characters, and maps built around their diminutive size." ~ tardis

The only thing that would prove a worthy successor at its time was the soon-to-be-released Hero's Realm, which combined RTP and the same 16-pixel tall characters to realize a world in great effect. But in a time when Dragon Fantasy stood alone, it did so brilliantly. The mountain was Ephiam's and so it was.

I've decided to go back and relive this golden age for the sake of the "Meat Your Maker" event going on now, and give my take on this classic through modern eyes.

Gameplay:
If you've ever played Dragon Warrior or Final Fantasy, you'll feel right at home with Dragon Fantasy. Get a good feel for your character's strengths and weaknesses in the early dungeons and manage your gold to purchase new equipment to fill in the holes and slowly grind your way up to becoming an unstoppable killing machine.

On your quest, you'll encounter many NPCs that inform you on the world at large and on rumors they've heard about secret treasures that can be found around the world. You'll absolutely want to talk to every NPC because this is how the game relays information to the player. If you make the mistake of believing Dragon Fantasy will beat directions over your head, prepare to think again.

Story:
An evil sorceror by the name of Vlad seeks to gain control of a mysterious fortress known as Venaitura, and your ragtag band of heroes have to stop him. That's it.

And while it shouldn't be a free pass if you use the retro approach, a simple story with a heavy emphasis on the gameplay is really where Dragon Fantasy shines. Ephiam has proven himself over the years to be a wizard at crafting battle situations that the player is tested to overcome.

Aesthetics:
It's very simple Final Fantasy 1 graphics for most places and they're all used to a satisfactory degree to establish a world that very much feels real in its own respect.

What I feel now is a little underwhelming is how difficult it is to find your way around the world once you get your ship. You're intended to travel to the far east to the grand city of Soriiati, but the way the world is spread out with very few distinct landmarks to hint that you're going in the right direction and not into a dead end could prove to be a bit annoying. This is the one thing I can't really forgive about this game.

Closing Statements:
As far as first games go, Ephiam really hit it out of the park with Dragon Fantasy, and the future looked brighter than ever for this new creative force. Tune in next time for my take on where this road lead him with his direct sequel, Dragon Fantasy II.

Close
01/21/2017 12:39 PM
Ah yes, I loved this review when I first received it, and I loved reading it again! Hopefully Chronicles of Tsufanubra does my old classic some justice.
Pages: 1