Note: This game has serious resource fail issues. You need to have copies of the Naramura & Ruruga resource pack or Samurai Pack on your system if you want to play.

Shogun: The Mini Game is set during the Sengoku Period in feudal Japan, a century and a half of political instability and warfare that spanned the years from 1467 to 1603, and saw Japan overrun with rival claims to the shogunate, conflicts over land and influence and armed uprisings from overtaxed peasants. In this war-torn landscape you find Eric (yes Eric) the son of a murdered daimyo who has been held in feudal hostage at the estate of his father's killer from when he was a child. Brought up and educated alongside the children and vassals of his enemy he has learned much of their strengths and weaknesses and buried himself in the political machinations that are the hallmark of his world. 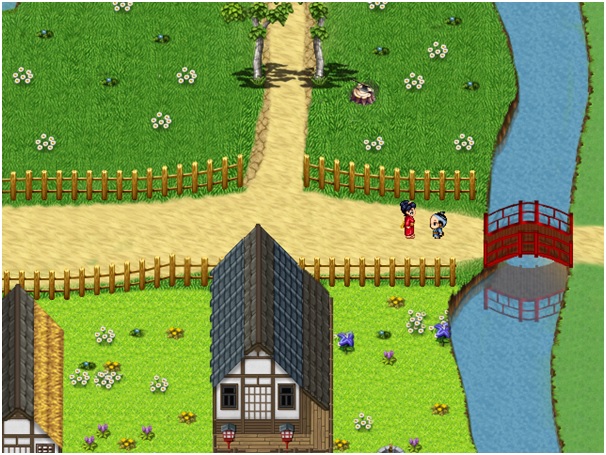 A little short for a stormtrooper samurai

Erik's story is obviously based on that of the real life Tokugawa Ieyasu the man who would end the Sengoku period with the establishment of the Tokugawa Shogunate, a dynasty that ruled Japan for almost two and a half centuries and who spent the majority of his childhood being used as a hostage captive for various opposing factions in the ongoing conflict.

Given the wide reaching landscape of such a rich and varied period in Japan's history the possibilities for an intricate and involved political story are almost endless; however that is not what you get in this game. In fact almost all of the above has been deduced from the game page, none of it appears in the game. The complexity of the situation has been reduced to a simple series of battles against champions of three rival clans with claims on the title of shogun. Though you only fight one of them in the game. This isn't unexpected however as this version of the game was made available as part of the 'Release Something XIII' event and is intended only to show a small portion of the available content and get feedback on the look and feel thus far.

The majority of the game play takes place on the battle map, a simple outdoor dojo with an earthen floor that has been worn away to its sandy foundations with the passage of many feet over the years. The battles themselves employ the classic turn based scenario, with some unexplained moves such as high, low, left and right sword moves that don't actually attack your enemy but appear to be preparatory moves in order to inflict higher damage in the following round. Whilst not ground breaking in any way they are serviceable, though the gift you were awarded for reaching the dojo cannot be equipped by your character so the battles are harder than they need to be because the developer has obviously designed them with the higher damaging weapon in mind.

The remainder of the game consists of three additional maps, the garden, forest and the village where you begin the game. All have issues with proportion and placement. In the garden this is highlighted by the odd mix of trees and their ability to apparently grow out of solid rock and defy the laws of nature. The forest has hastily and mismatched rips of what I assume is bamboo and in the village there are problems with the differently hued grasses with no explanatory shadows to indicate areas of intense sunlight, and the weird mix of bamboo, thatch and tile for roofing materials on the homes. On the upside the use of Celianna's tile sets are always a bonus and the developer has also added their own interpretation to some of the objects within the maps, which is appreciated if not for precision then at least for novelty. Though they do also display some passage issues.

Another noteworthy lack is sound, there isn't any; not just music but simple sounds of the forest or the garden. The twittering of birds in the forest, the slap of your getas on the gravel paths, or the gentle murmur of the streams and waterfall you pass on your way are all notable in their absence. Likewise the single combat is fought without the accompaniment of battle music. In addition the only line of dialogue you get in the entire game has a spelling error in it. 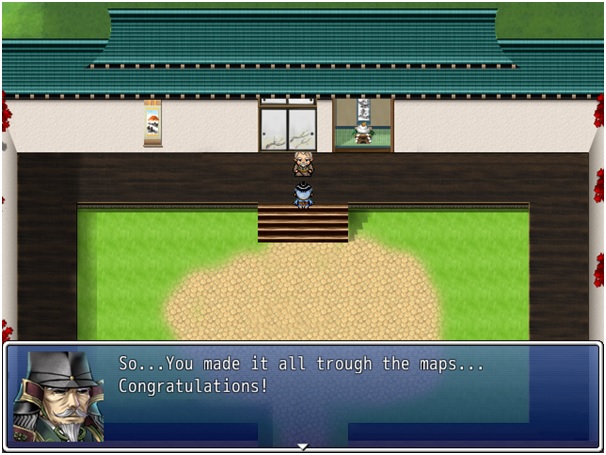 That does actually deserve congratulations.

There really isn't that much in the 'game' as it stands to rate it a starred score, so I won't be applying one to this demo given its current minimal content. If I did it would half to be a half star because as it stands it is both unplayable and badly executed. I would say to the developer he needs to bug test his game, even in such a limited release before making it available, as if I did not have the resources already on my system I would not have been able to see the even negligible content that has been provided.

For those who are interested. I need two more maps as it is now and i'm busy with creating the story part.

For those who read the review, the game as it is now was more like a show case of the mapping. But i understand it was about avarage...thanks! :p

This will be continued
Pages: 1