Note: This is a review of the currently available demo, which appears to be the final before the game moves into 'commercial' territory.

Ladra is an unusual game for RMN, it combines a lot of the elements of the classic RPG experience, but without that one that seems to be prevalent in most games, battles. The point of this game, beyond the story elements, is to avoid getting into conflicts. Your character Estella is a sneak-thief, emphasis on the word sneak and the game play is centred on not getting caught in your thieving endeavours. Estella isn't designed as a tank or powerhouse. She's the sort to shinny up a drain pipe, slink along the rooftop ridge and find a small casement window to slide open rather than charge through the front doors to the sound of pounding hooves and trumpets blazing. It makes for a refreshing change and quite a bit of a challenge as well. 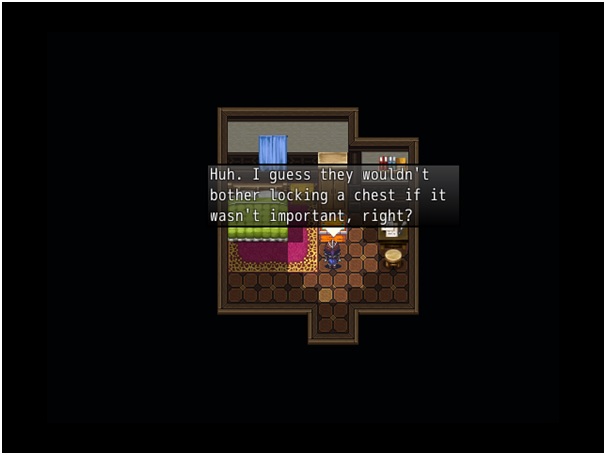 Estella's back-story is a mix of Oliver Twist and Cinderella with a bit of Jane Eyre thrown in for variety, orphaned due to a war from one half of her family and disease on the other she is taken in by her aunt and uncle who basically turn her into a scullery maid and general dogsbody and make her feel she should be grateful for their kind attentions. Growing increasingly unsatisfied with her lot she eventually decides to flee the narrow confines of her condition, unfortunately wounding her uncle in the process and more importantly from a story perspective dropping the only link she has back to her mother, a necklace handed down to her as her mother lay dying. Lost and alone on the streets of an unkind city she is befriended by the old man, a master thief who teaches her his ways and gives her a means of survival.

Along the way she meets another one of the old man's previous apprentices, Tonan, a man with a dark and violent back-story of his own, who has now grown too old for the stealing game and runs a tavern. In this setting Tonan gets commissions for jobs of a less than savoury nature and hands those jobs on to Estella to supply an income and also a means of discovering more about her Mother's necklace lost years earlier in that flight to freedom.

It should be noted that I learnt the majority of that via the game page, not the game; the amount of character building displayed within it is almost non-existent.

But of course set as it is in a world not long out of a series of destructive wars and poised to re-enter the fray, nothing can be that simple. 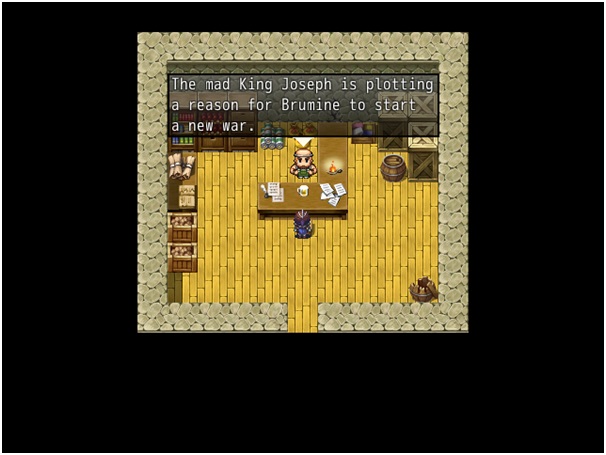 Ladra employs two main game play mechanics, sneaking, which involves dodging random guards and other non-thief characters to avoid detection and lock picking which comes into play once all the sneaking has lead you to whatever room holds the current target treasure. Sneaking is fairly straightforward in execution, if not in ability and if does take a bit of ingenuity to work out the right combinations of moves, dodges and hides to avoid detection. Though being detected simply sends you back to the last of the automatic save points. You do get a nice little dialogue at the end of the 'level' outlining how well you did in the attempt and the number of treasures you collected and times almost detected which is a good addition. Locking picking however requires a little more player dexterity involving finding the correction directional keys and then holding them to complete the attempt. Each of these game play elements get harder as the game progresses, but all of them have a viable solution, it just takes a little time to discover them. This portion of the game is very well handled, with a learning curve that is not too steep but is noticeable.

What isn't so well handled unfortunately are the story elements, aside from the obvious nods to some classic tales mentioned earlier most of the story exposition is clunky with some trite turns of phrase and dubious connections drawn without giving the player enough back-story to justify them. In addition there are a few spelling and grammatical errors which don't help the flow of conversations.

Not being able to access a menu which perfectly sensible in the manner of the game still feels a little off, as if you have little or no control over the character you are playing, which isn't a good position to put the player into. There is no need to equip items or check your inventory and as already stated saves happen automatically but there is still a sense that you need to have some interaction with the way this character behaves and you feel like you have almost none, it creates a strange sense of disassociation which does not bode well for any feeling of empathy with her story or goals.

Another downside is because the save are automatic and you have no menu control you can't redo a level to see if you could get past with less detections, which makes the little 'score' dialogue at the end of each level somewhat nonsensical and actually a little irritating since you can do nothing to improve it. Still since you also don't gain experience in this game I suppose the lack of do-overs to garner a better score is moot.

The musical choices are a mix of the default and Kevin MacLeod's music pack and hey are used pretty well, nothing spectacular but nothing that sounds out of place so there are no complaints in that area. 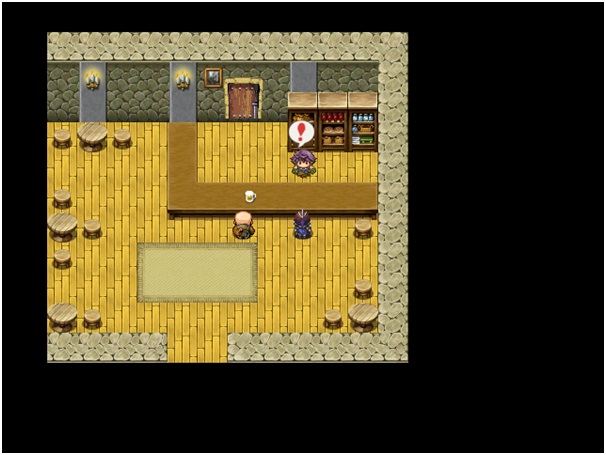 As always the barman is a talkative sort.

The graphics by and large are all the default, or a slight modification thereof, with the exception of the chests and doors for some reason, they are most definitely custom, but actually look a little out of place in the scheme of things. If the rest of the tile sets had been modified to match the more colourful and detailed doors and chests it would have worked much better and I can only hope that the full version of this game will indeed either do an overhaul of the remaining graphical elements to match or conversely revert back to the standard RTP, which whilst not original do have the advantage of being consistent.

The main character sprite is also a custom piece and seems just a little out of proportion with the default sprites, being a little too thin and tall when compared to the VXA sprites that make up the remaining characters in the game.

Still the flaws don't take away from the basic enjoyment of the game as it stands, TheSarcastic set out to make a stealth game with RPG elements and in that he has succeeded, it's just a shame that the obvious level of care and consideration he has poured into making the stealth elements so engrossing and layered has not been applied to the other portions of the game.

The demo ends after the second mission and just as some of what is obviously a conspiracy theory is beginning to unfold, however I doubt I'd continue with this into its commercial arena, the storyline being a vital importance to me in my enjoyment of a game as a whole, but if something that focuses on the stealth elements and gives you some interesting on the run puzzles to overcome is your cup of tea then Ladra may indeed be the thing for you.