Introduction
This seemed like my kind of game as soon as I saw it, so this will be a review coming from someone who finds an interest in this sort of premise as well as someone who focuses on design and writing in their own work. With this game, I'll be focusing on the two like I do most of the time with my reviews, however, this game has plenty of other touches outside of design and writing, so I won't exclude those. I'll actually be breaking it down into "graphic" and "audio" categories rather than an "other" category, however since I'm not skilled with either of the two I can't say much. And to quickly mention, I started giving scores for each part in my reviews, and with this one I'll start off with something new: my personal experience with the game.

My Experience
So I picked the game up and from the start was impressed by the writing, and I don't think it ever fell apart from there. I found one grammar mistake and one missing conversation during the whole thing. Both when trying to talk to the red woman(I can no longer remember the names :P, I think it was Mrs. Prattle). I tried inquiring about the Saymore house and nothing happened with her. I passed that off as "she has nothing to say other than that little vocal expression". I also ended up never finding anything out past level 2 for the photography topic. I ran into a bug right after defeating the final showdown, so I had to go back a long ways loading my last save. I waited until the next day to hop back on and it wasn't too bad trying to catch up, thankfully. While there were some moments where I had to grind a little, I don't think I ever got sick of it. Collecting the skills and the little side things you can do, like with wine tasting, gave me an opportunity to be a completionist, which I rather like being. I enjoyed this game quite a lot, with only a minor inconvenience once in a while. 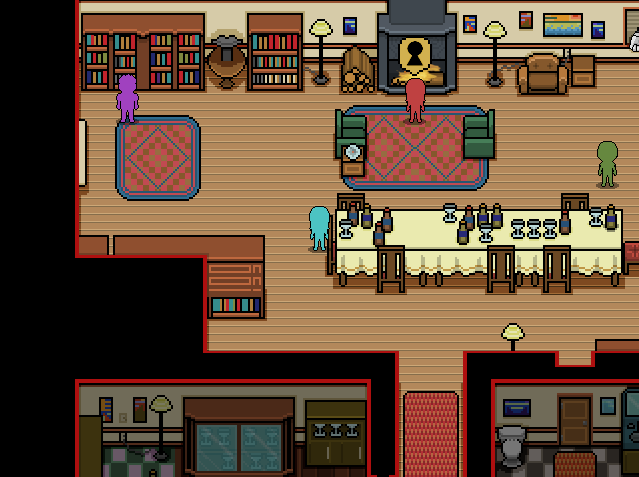 Good Visuals. I like the layout and the mingling feel to it.

Starting with the design, the conversational confrontations in the game were very smart and well-constructed, working in tandem with the UI. Sufficient information is provided. The typical triangle of weaknesses and strengths is displayed in the top/middle of the screen for viewing at all times, which helped greatly when focusing on choosing my moves.

There are three different types of moves, each identifiable as: the power accumulating moves, moves for trading power for tact, and the aggressive moves to actually win the battle at the expense of tact. The strategy ends up being that you watch the opponent's power and tact carefully, making sure you have some tact so you can use some aggressive moves to keep you away from the losing side of the conversation.

The party mingling and key topic gameplay boiled down to a very simplified system, really. However, I did like switching between topics, and it wasn't necessarily just walking up to people and exhausting all options as long as you were paying attention and deducing who you should talk to next. From what I understand it was very simplified due to the contest and I'm very interested in seeing in what ways the design of the key topic system could be better in every way.

Other than the main system, there were plenty of side things like the skills you could learn, the wine tasting which was a sort of side-quest requiring the player to buy the topic, examine the environment to earn the money back basically, and I believe earn a bit of a profit in experience points in return. The problem with that is there aren't indicators for where you could examine or even know you could examine them.

So in the end, I believe design was actually quite well structured allowing the player some freedom as well as having objectives for the player to work toward through discourse, gossiping, and chattering for bonuses. The gameplay didn't bore me, even when I had to grind a bit. It was pretty balanced with the occasional minor inconvenience, but an enjoyable experience.
4/5
Writing 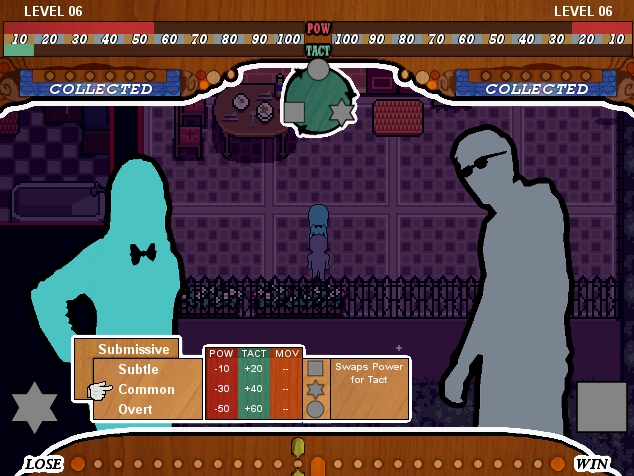 I did a little bit of grinding, got into a nice routine with taking him down. I love the conversational references in moves.

On to my favorite part of the game, it's writing and storyline. The plot ended up very engaging, with plot twists that, I think, avoided general pitfalls of a mystery. Each character is well written, not one-dimensional. I enjoyed each of them, and the plot was intriguing, making the back and forth of mingling, chattering and gossiping remain interesting as long as the writing is good. And it is.

The plot had plenty of layers of intrigue and the like, and the overall experience is one that I'll be looking to for, not only inspiration, but something I'll look up to when I write my own story-lines, plot, characters, dialogue. It was quite exceptional, and I urge story-driven game lovers to play this game. It was quite good.
5/5 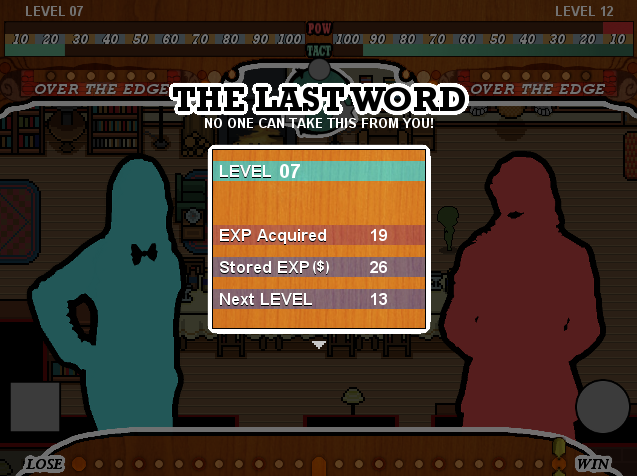 The UI works well visually, and each of the character portraits have that single black item you can identify characters with. Like the bow, and the lips.

The custom graphics in the game, while filling up a rather small setting, all meshed so well and the color-coded silhouette characters were each identifiable whether you knew their name or not. The game's style fits the characters and the tone of the story. The mansion certainly feels like a mansion and the environment is unique, different from the generic mansion. Wine seems to be a big theme, and the bottles are spread throughout each room. Wine is all over this party. I really liked the change of color tinting whenever you enter a different room. The dark, bluish tint in the bathroom, and the reddish dark of the host's room with the glow of the fireplace. The settings in this game were rather memorable and identifiable. Finally, the mapping and environment were overall well put together, albeit sometimes, for example when walking by the ends of each table, my character was a bit too close and looked like she was walking through the chairs. Either way, the setting was appealing.
4.5/5

Audio/Soundtrack
Overall, the audio works well. The soundtrack goes well with the game, however at some points the music was a little too distracting during battles and I found myself turning it down just a bit. The electric guitar victory tune might feel a bit out of place in this setting, otherwise it fits well with the "victory" feeling. The ambiance, however, fits very well with the setting and scenes and sets a very good tone for a sort of mystery game.

The voiced grunts, moans, and "ahems" of the characters every time you interact with them sometimes help you identify who's talking, but they become a bit repetitive. While repetitive, sometimes it feels like it's also expressing their emotion at the time, but most of the time it's the same vocal it seems.
4/5

Conclusion
So there was a lot of intrigue in the plot and gameplay that kept me very interested. I like the multiple attempts to making things easily identifiable, from tints to the UI, the character portraits and the topic system. Overall, I think this was a very intelligent experience and enjoyed it a lot. From what I understand, this is only simplified in some areas of design due to the short length. However, the discourse was a great system with a great UI accompanying it.

What could be done to make it better? Well, I suppose with more design components, the "mingling" feel could be something to improve on. Making it feel like I swing from one conversation to the other would be cool. The guests could interact with each other more, maybe. Overall, I think the writing was great, and with some touch-ups to the audio and design, this could be an even better game. But in any case, this game is definitely a: