The Count of Venomlurk Manor

Don't count on seeing any of the images on the game page in this demo, because the only download here is a "puzzle demo". As I've since found out, that literally means that there is just 1 puzzle in this demo. I'd go so far as to say this is basically a 0.01 alpha or some equivalent thereof. So where does that leave us?

Story is nonexistent. If you were expecting some more details than what you saw on the game page, you won't find any in this download. You're just plopped inside the mansion with no explanation and that's it.

Gameplay consists of a single puzzle: you have to play a piano to open up 3 teleportation thingies. The only hints you are given are a single note of the song and paintings that hint at the songs' names. (E.g. a birthday cake meant that you should have played the happy birthday song.) Well, I am a Level 1A (the lowest level) in piano mastery and dont know each note by heart, so I had to brute force the puzzle. After that you advance to the second area with nothing much to do, then this happens: 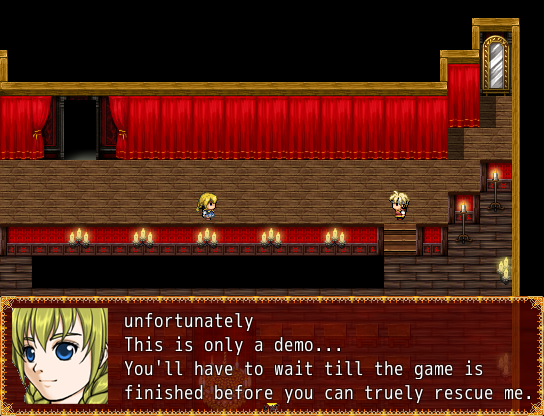 Oh, so that's why I came inside this spooky mansion.

The mapping isn't too bad, a decent tileset was used and the mansion felt quite alive, what with all the musical instruments coming to life and floating around all over the place like they own it. So just imagine, a haunted mansion with all sorts of pianos, harps, drums, and many other instruments twerking and dancing to the tune of...

Nothing. Yeah, there was no BGM for that particular area. 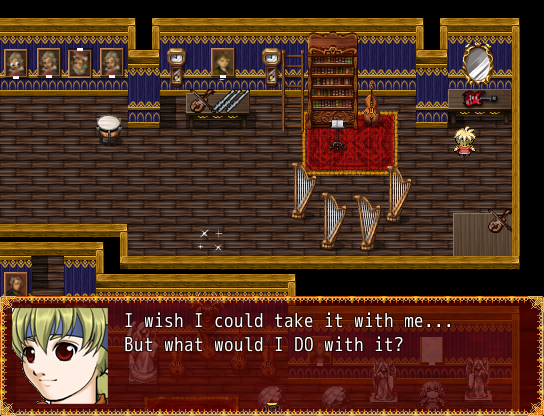 Well, you could try playing it since there's no BGM in this area either

I opened the game in RPGMaker and as it turns out, only the lobby had a BGM but I never even noticed it in-game because it had a slow start and I didnt stay in the lobby for that long. Honestly, I don't usually comment on the game's music but it's hard to ignore the deafening silence in this game with those musical instruments flying all over the rooms.

Overall, this is an extremely incomplete demo with just one puzzle and not much else. I agree with the gamepage comments that this game was simply not ready for a release at this stage in development.