2 reviews
Save to Dropbox
My love letter to the early Phantasy Star games, Accelerated World ( or AW for short ) is going to be a deliberate retro romp to the good old days of those 90s SNES/Genny console JRPGs. Because nearly everything is custom, making a large scale project will be next to impossible.

Two Aurers from the Stellar Solidarity of Spheres ( or ES3 for short ) are called to investigate a strange occurrence in relation to one of the planet's life-sustaining tech systems. An energy surge has got Commander Random worrying, and he dispatches Ayla and her partner Hyke to check it out.

- Simplified town maps. Instead of having dozens of NPCs and having the player wander into their homes, the towns are just hubs where the player can stock up on supplies at the chemist, heal up at the clinic or talk to an important/useful NPC.
- Retro pixel graphics.
- No fancy menu systems. After all, this game is supposed to feel like a 90s romp.
- I'm aiming for around 30mins - 1 hr of playtime.

An update for AW...? What could it mean?

Wow, it's been more than 8 months since I wrapped up this game. 0_o

But--
I'm wondering if I should expand on Accelerated World and turn it into a commercial romp one day. I loved Phantasy Star ( IV was my first foray into the RPG genre, and I never looked back ). While I can touch up the pixel art and keep things minimalist for that retro-feel, I've been thinking about expanding the storyline and maybe even porting the whole game over to VXAce, using Luna Engine and YF Engine Ace/Battle Engine Ace.

The two-week time constraint in which I made this game left little room for innovation and proper testing. And I really liked writing the character of Ayla, since she's so different from my more serious female protagonists ( Laine and Tristian ). Also, her blue longcoat and platinum blonde hair is just bad-ass. <3 Of course, my slight yuri tendencies will probably lead me to replacing Hyke with another female character...

But it will scream Phantasy Star, like the lovechild of Phantasy Star II ( 1989 ) and Phantasy Star IV ( 1994 ), but unrelated to the beloved Algo Solar System. And for those of you would didn't play II, it tackled social commentary/Big Brother/environ issues and the tragic-death of a female MC a good EIGHT years before FF7. The only difference is AW will be nowhere near as tedious to play ( Phantasy Star II was notoriously Nintendo Hard ).

As for going commercial, the target market would definitely be those players who yearn for the RPGs of yester-year ( late 80s - mid 90s; aka the 'Golden Age' ) or simply the player base on Steam who is tired of seeing these generic-looking VXAce games being sold for more money than they're actually worth.

But I still need to finish Tristian before taking on my commercial dream-game. XD But I think with two large completed games under my belt and the upcoming Transcend and LoA, I should stand a good chance of being Greenlit when this game takes that route. After it is completed, that is.

And here I thought this game was done and dusted when the MOG event ended... I just thought I'd post it because it was on my mind.

What is a sci-fi game without a visit to a space station? 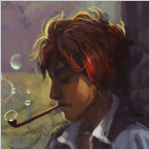 Close
12/11/2014 12:40 AM
I'm always a fan of simplified hub maps where the player can get what they need, but I'm also a huge fan of Wizardry so it kind of comes with the package.

Good luck with this; I hope the time will allow you to continue with the "everything custom" route.
polarcactus

Close
12/11/2014 06:07 AM
I hope I can do that, but I have a feeling I will still have to use some of the default RMVX character graphics like those water effects and rocks. And the battlers are placeholders for now until I can make my own robots.
suzy_cheesedreams

Close
12/11/2014 12:14 PM
I absolutely adore the early Phantasy Star games, and this looks totally beautiful! I too am subscribed :DDD
CashmereCat

Close
12/13/2014 07:37 AM
So this is what you’ve been squirrelling away working on and showing off in a little in the Whatchu Workin’ On thread and for the M.O.G. Events. I must say, this all sounds and looks really cool. And you say that is loosely based on the Phantasy Star series? The only Phantasy Star game that I’ve ever played was Phantasy Star 2 at my friend’s house a long, long time ago, since he was the only one that I knew that owned a Genesis and I had a Super Nintendo. We would often come over to each other’s houses and play games that he couldn’t experience and the ones that I couldn’t experience, like Road Rash, Shining Force, Golden Axe, Sonic, Streets Of Rage, and the such.

Anyways, I’ll give this a sub. Seems like everything that you touch and work on that I’m instantly glued to it. It’s like an obligation for me, or something.
shayoko

Though like Addit, it's you so I'll play anyway.

Close
12/14/2014 09:45 PM
thats not a problem lol,and usually people makes threads for reasons i don't understand and would probably disagree with b4 even a demo is produced
was made only 5 days ago o.o
Marrend

author=shayoko
thats not a problem lol,and usually people makes threads for reasons i don't understand and would probably disagree with b4 even a demo is produced
was made only 5 days ago o.o

That... might be taking Max's comment too literally. I'm reading it in a more "This game is so awesome, I want to play it now!" kind of way.
emmych

author=shayoko
thats not a problem lol,and usually people makes threads for reasons i don't understand and would probably disagree with b4 even a demo is produced
was made only 5 days ago o.o

That... might be taking Max's comment too literally. I'm reading it in a more "This game is so awesome, I want to play it now!" kind of way.

yeah...yeah this...I expect to be misunderstood sometimes but wow.
Linkis

A rather interesting game, if a bit short. The artwork is very nice. So you made it all by yourself? That's quite impressive. I like the general style of tiles and enemy battlers. The character sprite is a bit stiff at walking though (maybe an extended frames script could do the trick here). Music is nice too and fits the atmosphere.

The battles were fine. There wasn't a whole lot of strategy to them, but they were balanced reasonably. The only thing that annoyed me a bit was how quickly the characters ran out of energy, so I just had to keep buying and drinking energy potions. I do like the battle animations a lot. Good work on that.

I was a bit disappointed that there was no boss fight at the end of the second level (the satellite). It was a bit of an underwhelming and sudden ending. Overall the story was a bit so-so. It seems to lack a proper beginning and a proper end, as if I am just playing a chapter in the mid point of a bigger game. The text-based intro was a bit of an info dump too (which is the same thing I said about your other game, Enelysion). It's a lot more gripping to show rather than tell. Also, why is the Commander's name Random?

Lastly, and this was perhaps the biggest flaw in my opinion, is that the font was horrible. It was small and difficult to read, even at full screen. Letters such as Bs, Os, and Ds often looked the same and everything just looked stretched. I would highly suggest to change the font, because the current one is just really really bad.

Overall the game is pretty nice. I had a certain amount of fun playing through it, though wish it was longer. I can certainly say it's better than Enelysion in many regards.
MorteTorment
0

As someone who despises Phantasy Star I-III as a whole, but loves the atmosphere and storyline of Phantasy Start II, this feels like a dream come true.