A man called Dungeon is a bit of a mixed bag, due to the nature of its construction. As an entry into the final part of the 2014 My Own Game (MOG) event whereby you made a game out of the resources created in the two earlier phases MOG Music and MOG Graphics, it was always going to have a somewhat disjointed feel as disparate creative endeavours were melded into one another.

In this game Cap_H availed himself of the talents of Kentona, JosephSeraph, Luchino, Shensetta, KoopaKush, GoatBoy & CashmereCat for his tiles sets, mapping, faces sets and music and repaid that by including cameo performances or mentions of those users in the game. Though it should be noted Cap_H uses Luchino's old username of Yuna21 as this game was developed before she opted for her name change.

The developer is not a native English speaker, and the game has a plethora of spelling and grammar errors, most of which could probably have been picked up by using an English language word processor for the script before entering it into the game engine, but given that the MOG event had a deadline I can understand why that step was missed. Still they do at times make comprehension difficult so I would recommend handing the game to a native English speaker for an edit. Though there are some unintentionally funny mistranslations, and I'm glad I got to experience them before the inevitable polish smoothed them away. 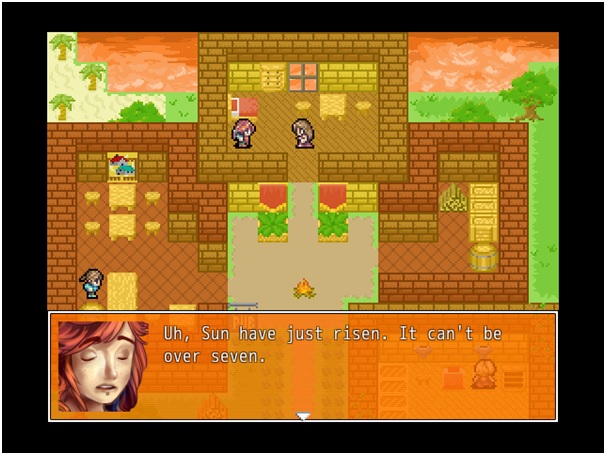 Now that is what I sound like in the morning, but in this instance it's not a lack of coffee error.

The basic premise is simple, the Lady Karen, daughter of the previous mayor of Sunny Village is off on a quest to find her father. He's been declared dead and for the past decade she believed he was, but not any longer. To aid her in her search she enlists the support of the titular character Dungeon, whose major claim to fame is being the only person to escape a maximum security prison on Volcano Island. Along the way Dungeon recruits his cousin Ab, a reformed criminal and still active smart mouth to aid them as he knows the journey to find Karen's father will not be an easy one and even the help of a malcontent is better than none at all.

However before Karen can even find Dungeon she has to choose sides in a conflict between two equally odious brothers. Both are out to increase their own prestige and power, so the outcome is fairly well established as mutually assured destruction, you just have decide which side you want to claim victory in the end. It's quite nihilistic and a little depressing. Especially as it serves little purpose other than as flavour for the fact the world is which this game is set highly militaristic. It makes the bright tones of the tile-sets somewhat incongruous; for all that they are used well.

So after leaving a bloodbath of one side or the other in your wake you get out of town and head to the shack where Dungeon lives and confront him about the fact he conspired with your traditionally gender roled mother a decade ago to lie about the fate of your father. He demurs for a while about aiding you but after a little emotional blackmail and the chance of redemption he decides that it's about time he made up for past mistakes and tags along. 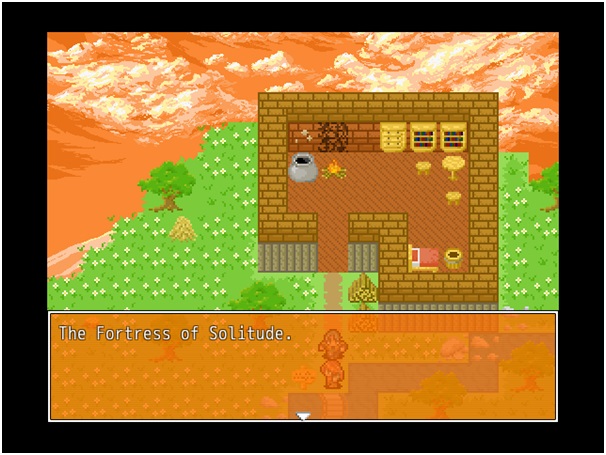 After ending a generation long magical war and forging a co-dependent relationship between the previous combatants, spend some time consorting with villainous scum to aid in tracking down some black-market body parts, not to mention rescuing a kidnapped artist you finally are free to make your way to the place where your father has been held captive for the last decade and find a way to free him. After of course traversing a toxic swampy morass conveniently located beneath the foundations of the last town on the world map.

The story in this game was never intended to make a lot of sense if the game page descriptions are any indication, and it doesn't. The cast of this little tale are a bunch of narcissistic megalomaniacs, corrupt malefactors and zealous ideologues and with that as your dramatis personæ you're bound to find keeping them all in line a task of herculean proportions. Still for all the eccentricity that entails it is entertaining. Odd, but entertaining.

I have no idea if a future polish is going to sanitise some of that irrationality, and in truth it probably should if the game is going to be taken seriously on any level but there is a charm to the oddness of this game as it stands, the strange aggregate of incongruent elements that somehow comes together into a cohesive whole.

Though I will agree with the game page on one point, there are a multitude of possible endings and none of them is satisfying.

Close
07/02/2015 09:21 AM
Thanks for review, Nhubi. It§s a nice read.
I agree with you in most cases. One thing strikes me as strange, tho. Do you disagree with use of some 'tropes' (mother, criminal world)?
As for my returning to this and polishing language, It's unlikely any time soon. Some kind of sequel with battles and all is more plausible. Personally, I don't want to make more games dependent on text before I'll have a chance to travel out for longer period of time and improve on myself. Chain of Love is probably the last English project of mine for quite a some time.
But again, thanks for an objective and fairly positive review, I wish I would be half as analytic as you are.
Pages: 1