The girl, the boy and the bot!

Yes. The RpgmakerAddict reviewed a game that was NOT made with his loved Rmk200X, but instead with RPG Maker VX Ace. This happened, BUT only because this game was realized using the nice Rmk200X charsets and chipsets.
So let's start this review with...

Story and Characters
Did you read the title? Tyris is the girl, Kent is the boy (and no, they are not a couple, but they sister and brother), while SER is ther robot friend. These three characters form the party (of scavengers) that we will play from the beginning to the end of this game (I do not know why, but I expected a fourth character to be added later to the team, for a typical four-characters-party. I was wrong, because no one of the two important npcs you will meet in the desolate lands joins the group).

The story is this: the planet is dying, humans fight mutated animals and a race of giant samurai bugs, just to live another day. Our group is one of the scavenger teams that helps the survivors of a little village, maybe the last one left. That's all we know (by the way you can learn a something more about the background and the setting in the room full of terminals in the north-west part of the village, but this is just extra content, not mandatory and nor particularly useful to understand the story). The situation is clearly not good, but believe me if I tell you that soon it will go from bad to worse. Will our heroes save (what is left of) the world?

The game is a depressing story not without some hilarious moments: ok, the heroes have to save the world, but no one will be able restore it to the original conditions. Anyway despite this desperate situation, our heroes will talk, joke and sometimes bicker, even if, during later stages, things will become more tragic and grim. I appreciated some ideas and the originality of the plot, even if some events right before the ending result a bit odd and, in my opinion, not well motivated. I liked these choices because they are unexpected but... I wished for the explanation and motivation of some details and situations that were never clarified. Pity.
I won't spoil or tell what happens, so play this game and see by yourself if I am right about the ending, ok?. 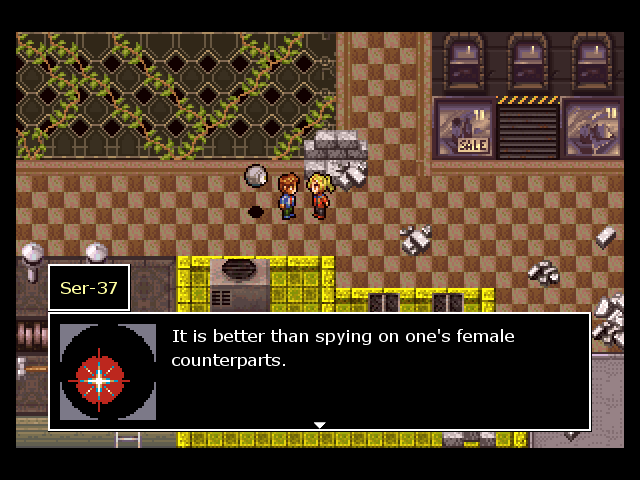 Graphics & Music
Ooooh my favourite graphic style. Yes, I liked a lot the custom charsets, there aren't animations besides walking, but they look good, and except for some deja vu, many resources used here seem original to me. Or edits. And I liked a lot the portraits of the main characters too.

I liked mapping a bit less. The theme is: "delve into the city -- now turned an enormous dungeon". Well yes, pity that the maps, despite the nice chipsets used, looks like dungeons and not city blocks, but while this is not entirely bad, I found maps to be quite simple, and in some parts also bugged. This happened twice in areas with some optional bosses. Ok, see the pic below? 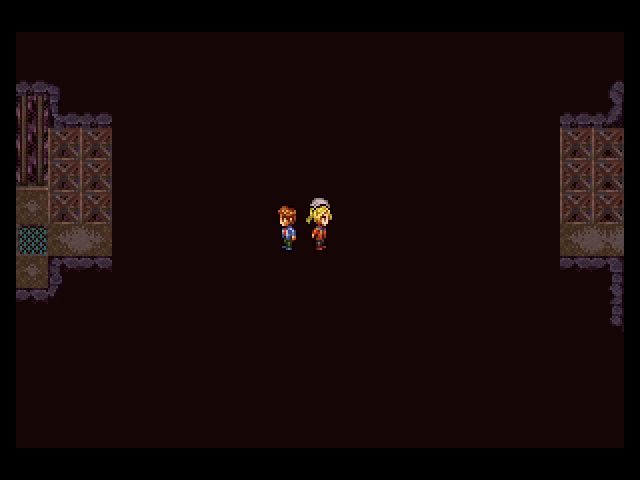 Sometimes it happens to be teleported outside of the map and be stuck in a loop of teleports, so the safest way to avoid being stuck (reloading is no use, because this always happened coming back from another area that had a dead end) is running on the external sides of the maps and re-enter the place from the lower part of the screen (or south, if you want!).
I was sweating when this happened, because restarting from an older save and avoiding a boss that gives you lots of XP and nice items isn't really funny!

Music is ok and not particularly noteworthy, until I... I heard...
"You are the dancing queen
Young and sweet
Only seventeen "
Yeah. Unbelivable. Dancing Queen was a bit... hmmm, and out of place, I think, but it was a nice touch since I took it as a joke, because there are few other humorous parts in this game that feel odd.

Gameplay
This is quite simple: after a short but nice introductive prologue (that works as a sort of tutorial for the rest of the game), we will start our mission the human base that will be often revisited during the course of the game. The main quest consists in exploring four different areas of the city to... look around for "something": clues, loot boxes, other items and so on, but basically this means exploring these dungeons until we find a particular place/character/item that will unlock a cutscene and then we will be automatically teleported back to the base (I think that is never clearly explained what we have to find or do, even if in later stages it will become clear which is our mission and what is the use of the items we found before). Then we will witness another cutscene that basically says "move to the next zone to advancethe plot". The four areas are in order of difficulty, so it's suggested to start with the first one, then the second and so on.

The game consists in exploration, some minor puzzles (find the keycard, move the chair to reach the key to unlock the door, and so on, nothing too complex), and combat, lots of combat. This is the usual RPG Maker VX Ace combat system with MP and TP. One character uses MP, the other TP and the third uses both. One of them is a heavy hitter specialized in elemental attacks, another is the healer/debuffer of the team, and the third is specialized in multiple attacks and some healing. 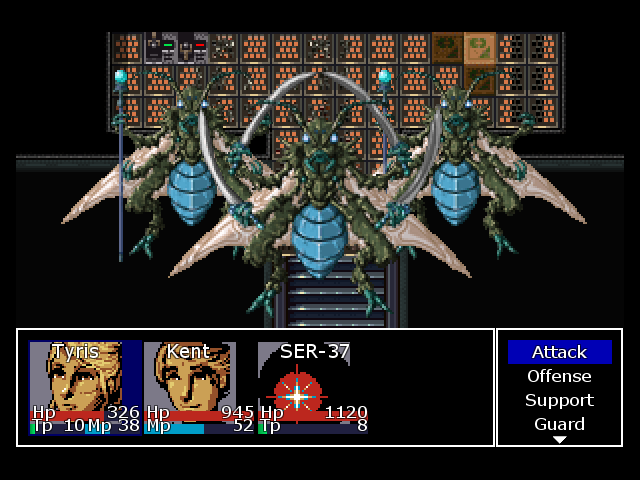 But wait, there's more! When you level up you also spend points to unlock advancements, that can be active or passive skills, or just a general improvement of the character's abilities. Every character has a different tree of advancements, and I was able to complete the tree for Tyris and Kent, but not for the robot, that seems to have some more advancements than his human companions.
This is a nice idea, I liked very much the possibility to choose the abilities to unlock first, It's something I have rarely seen before in other games, and usually the system was complicated and confusing, but this is not the case.

For the rest it's nothing new: you have equippable gear, one shot damaging items like grenades and explosives, and healing consumables (I loved the various references to movies and comics, for example one item is Han Solo's belt!). It's worth noting that there are NO shops in this game, so everything has to be scavenged or earned defeating enemies, even if some powerful weapons can be created in the base, but only if you give some rare items that are found somewhere in one of the four zones, to a particular npc. These crafted weapons are quite powerful, and seems to make a lot of difference (when I had the revolver, game became a lot easier), but there are even better arms that can be earned if you defeat the optional bosses.

Combat is rather easy, and I finished the game without using half of the stash of healing items and explosives. I died only twice because I underestimated some strong enemies. But it's ok.
Opponents are always visible (and avoidable) and do not respawn, but, for some kind of bug they can still be heard groaning (and a baloon with an exclamation mark appears, like when they were alive, but you do not risk other combat encounters).

Verdict
This game is not without flaws. Besides the problems with maps, and the presence of "ghosts" of the dead opponents, there are also some typos, some chests that doesn't open (that are even located in some positions not easy to reach), and some locations in which you can oddly walk over some crates and under some seats. Also the fourth and final area has no teleport, so you cannot go back to the base, but nobody warns of this before going there, so... pay attention not to select the fourth area too early, or you will be stuck there (as you won't have the items used to unlock a particular door!).

Personally, I'd give 3 to this game as it is, but considering that this is the work of not one, but three makers, this earns an extra half point (mixing and reconciling not two, but there different points of view, concepts and ideas it's not easy at all!). It's a pity, because it could have been just a bit better without the flaws I mentioned, but it's a pleasant short and linear adventure nonenthless. So 3.5 it is!

author=Cap_H
Hey, thanks for the detailed review.

Thanks! I had fun playing the game!

author=CashmereCat
A 3 or a 3.5 star review for something with so many bugs (not just the literal ones) is very generous!

author=CashmereCat
A lot of the confused nature of this project was actually kind of intentional, but there's some of it that isn't intentional. I take 100% responsibility for the Dancing Queen gag, yet I still defend it as completely dark and played not-for-jokes. It's a serious moment.

I like when the game surprise me! It's really bed when everything is predictable.

author=CashmereCat
Glad to hear you didn't totally pull your hair out, and thanks for this unexpected review. You truly are a beast (in a good way!), TheRpgMakerAddict.

As I said before, I had fun! Game is rather easy, so it was relaxing and enjoyable.
And yes, I know what you mean. I am!
Thank you! :D
CashmereCat

Close
11/25/2019 10:25 AM
A 3 or a 3.5 star review for something with so many bugs (not just the literal ones) is very generous! A lot of the confused nature of this project was actually kind of intentional, but there's some of it that isn't intentional. I take 100% responsibility for the Dancing Queen gag, yet I still defend it as completely dark and played not-for-jokes. It's a serious moment.

Nevertheless, there's a lot in this game that must have been a chore to get through, however, part of my heart soars that its DNA is worthy enough for 3 stars.

I have Cap_H and JosephSeraph to thank for their incredible DNA that they sprayed all over this project. This was a messy one, but an incredibly interestingly messy one indeed. Glad to hear you didn't totally pull your hair out, and thanks for this unexpected review. You truly are a beast (in a good way!), TheRpgMakerAddict.
Cap_H

Close
11/24/2019 07:56 PM
Hey, thanks for the detailed review.
I think I'll wait for Cash and JoSeph before making a detailed comment of mine, but I just wanted to thank you for taking your time with this!
Pages: 1