A bittersweet tale and a great adventure

Fey. A simple name for a really particular game by Ashes of Emerald.

The Good
Fey is an adventure game about exploration that takes away all the typical rmk jrpg features and replaces them with real time minigames: Combat? It's a minigame! Escaping from pursuers? Minigame! Stealth sections? Minigame of course! And so on. The result is a varied gameplay that do not distract from the story and instead it fits perfectly the narration. So, in few words, gameplay is great, lots of fun!
Combat is real time with many different weapons: a classic sword, a slingshot, timed bombs, and even a flamethrower. Each weapon plays differently and very well, and there are even some boss combats. There's a decent variation that makes combat not too frequent and not too repetitive.

The story? Landon Ferngrass (partnered up with a shapeshifting creature named Picaro, whose role will be clear only in later stages) is the main protagonist that we control. The story starts in media res, and all we know is that our young boy is looking for a map, then flashbacks gradually fills the backstory and explain the whole situation. In the beginning we have no idea of what is going on, and we do not know the motivations of the two protagonists, anyway the game is so linear that you won't have to worry about this because it will always be clear which will be your next task. Story is in facr linear but well constructed except for some problems I will address later.

You can also save at the beginning of each chapter and in particular parts, but no problem with that, saves are well placed and you won't risk to repeat a long section a lot of times. 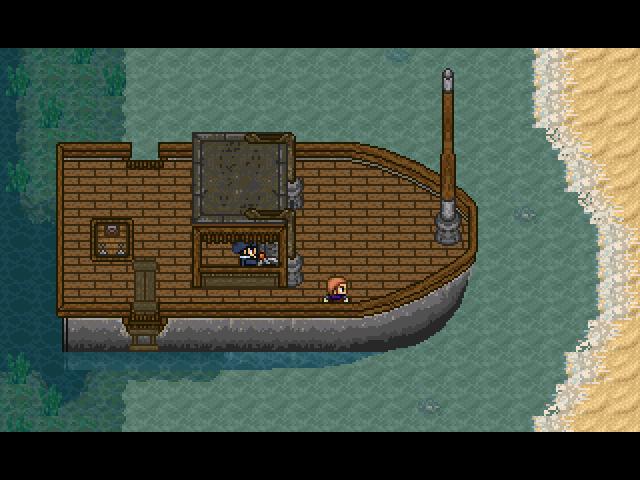 Visually the game uses the usual style of Rmk2003 (that I like a lot) but with a ton of edits and animations, included a lot of cute details that contribuites to the creation of nice scenes. The main character himself, Landon, changes his appearance, and clothing too, a lot of times during the course of the game. It's something you see rarely in a game. It'v clearly impressive the level of detail of the many different locations and landscapes: some cities and villages have a distinct appearance that makes them fitting the (often sad) mood of the moment, like the snowy village in the end or the city with the grey walls and the dry leaves. I also like some things of the game universe that are particularly original like the giant snails (used as a mount) or a particular evil race, but hey it's clearly not the usual fantasy with dragon and elves!

Likewise music is good too and not the usual rips that are heard so many times, and fits well the different moments of the game. 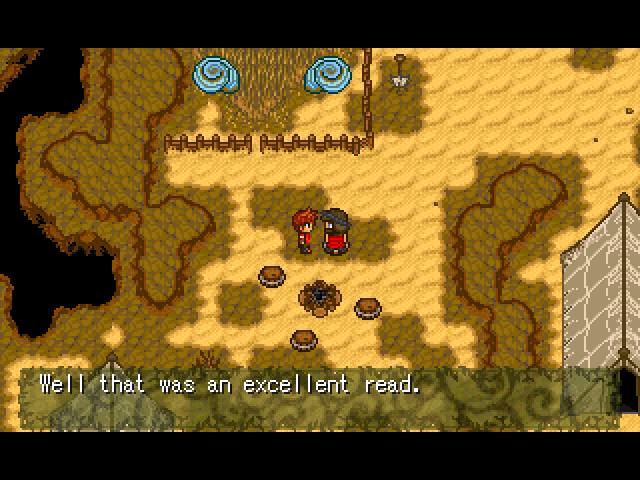 ...and this was an excellent adventure

The Bad
Unfortunately not everything is perfect. The first problem is the fact that the last parts are a bit rushed: from the game resources I can see that there are some unused files so I suppose that there were content that was cut from the main release (for example the trainer asks you to come back for more lessons, but they are never available. Also there seems to be no great use of the various shops beside collecting some relics), and that's a shame since the game would have benefit a lot from a longer storyline and additional sections. As I said the final parts looks rushed. Pity! I wanted more.
And because of the things I just mentioned, the story results a bit odd, some events seems a bit... I don't now, forced or too quick, especially for the ending. Some things are also never clearly explained or addressed, but maybe it's just my opinion.

Another problem is that I found some difficulty spikes but not much. For example when fighting the pirate ghost the duel is rather difficult compared to other sections.

Final Thoughs
Fey is a great adventure game with few minor flaws, but these were just minor details and additional things, finishing touches that do not impact the great gameplay and nice visuals. Ashes of Emerald is currently making a re-imagining of Fey called What's Left, with hours of new content, and this probably confirms my theory on the cut content. Fey is already a good game, but with some revisions, additions and expansions it can become a great game. Anyway as it is now Fey earns a solid 4/5 for being a stylish game, fun to play and with a good pacing for the most part.
If Fey is a starting point, then What's Left will be even better.

Close
09/10/2019 12:17 AM
Thank you so much for all the praise and kind words. I agree with everything and you’re right. All of the cut content and some other stuff is in the new finished version!
TheRpgmakerAddict

author=Ashes of Emerald
Thank you so much for all the praise and kind words. I agree with everything and you’re right. All of the cut content and some other stuff is in the new finished version!

Great news! The first half of the game was my favourite, and I am happy that there will be a new version. Even better if the same style and engine will be used because there was a particular charm of some locations anche characters.
Ashes of Emerald
2446

author=Ashes of Emerald
Thank you so much for all the praise and kind words. I agree with everything and you’re right. All of the cut content and some other stuff is in the new finished version!

Great news! The first half of the game was my favourite, and I am happy that there will be a new version. Even better if the same style and engine will be used because there was a particular charm of some locations anche characters.

Thank you! The official Steam page is live right now if you want to check it out. The first half has been heavily expanded and all the new content is like the above mentioned parts! It’s the same engine, just with a whole lot more polish and new mechanics!
Pages: 1