Hello once again, everyone!

It's been a tumultuous few months, and as a result, Chapter Five has seen a few delays. Long story short, I decided to split the chapter in half. The latest release covers almost the entirety of Chapter Five's daily life and ends on a really nasty cliffhanger. The next release, which is currently scheduled for March 5th, will contain the rest of the chapter. As this is an odd-numbered chapter, this begins the final arc of Forge:Re's story, which is titled... 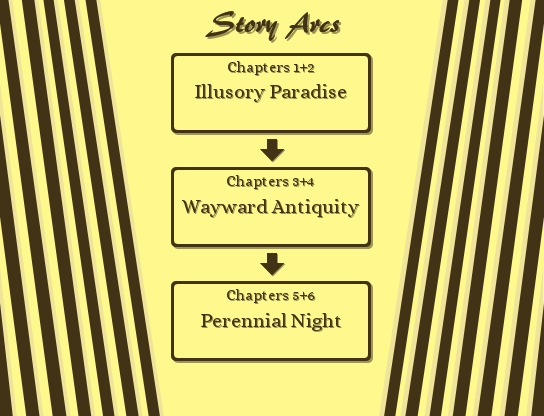 As always, you can find the download link for the game in the Discord server, which you can find right under the "About" section of the game's page here on RMN. One other thing I want to touch on, which I spoke about in the Discord server just the other week, is that Chapter 6's development is very much so up in the air at this point in time. In working towards carving out a career in writing for myself, I've been accepted onto a project that will likely eat up a substantial portion of my time. That, mixed with other happenings in my life, puts Chapter Six in a very odd position. While I'll work on it as my other work allows, I can't even begin to fathom when it'll be done and ready anymore. As such, I wouldn't allow myself to get too antsy over it. It's going to be a looong ways off.

That's all I have to say this time around, so with that, I'll see you all next month for Forge:Re's final "monthly" release!