I saw and downloaded The Sunset Sheriff (by Delsin7) at least two years ago and probably it stood out because it's a western title. A rare event, extremely rare!
Whe I started the game the first thing I noticed is that some characters have the same name of some members of the Rmk.net community, starting with the sheriff Libby. So I believed it was one of these "community games", rather short and with extremely easy combat.

Twenty minutes later my party was being destroyed by a huge troll.

Hm ok.
Did I say "Troll"? Yes, this game isn't clearly set in the realistic Wild West of the movies, but rather in a sort of Fantasy-Anime-Western similar to the videogame "Tengai Makyou Dai 4 Shi no Mokujiroku-The Apocalypse IV" (ever seen that game? The map was legendary!) in which we will find bandits armed with scimitars and gunslingers, elves and cowboys, and trolls too. Maybe this was done on purpouse or maybe this is due to he few resources available for making a decent realistic western adventure, probably both, anyway I don't mind, One Piece is not about realistic pirates, so where is the problem? 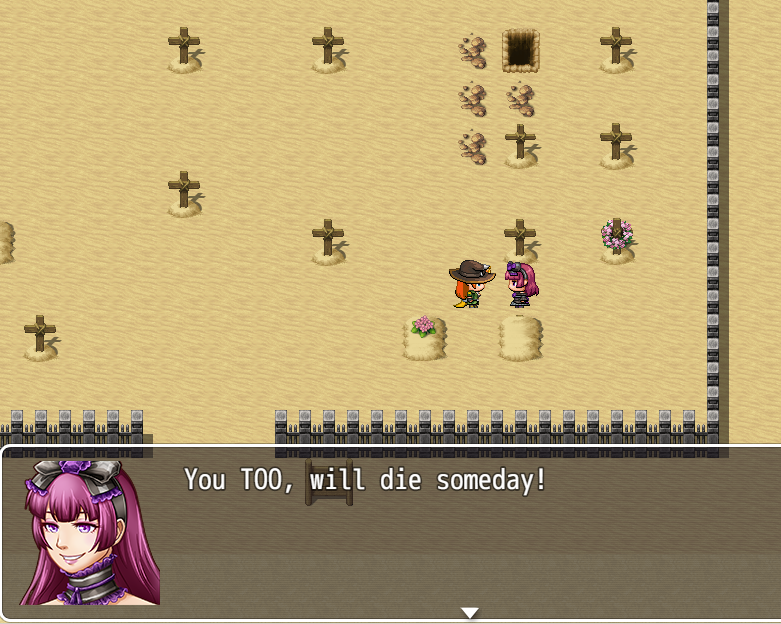 The game has no main quest, well the objective is to become sheriff, but you can retire as soon as you want. OR you can travel the world, explore the desert, the mines and the farms looking for adventure, people to help and outlaws to defeat. So this game is an open world adventure, and a rather easy one (but don't get to cocky) since you can soon find a companion, and later you will be able to form a real posse.
An aspect I liked a lot is that characters start with all the needed combat skills, but they can also learn how to heal people from the doctor, how to use a pickaxe from a miner and so on. Clearly you get experience points (and level) defeating enemies and solving quest, and this improves the character's abilities, but also seem to unlock some more quests that are not available from the start.

Speaking about the members of the team I liked how not only they have different personalitis but they also possess quite different abilities (the mace wielding Ira is much different from the gun-fu expert Caz), and how they have to reload their guns during combat. I also liked the setting, while this is not a huge adventure, the world is well outlined and possess a certain charm. In the end you can just desire more quest to find and more adventures due to the charming atmosphere.

Enemies are found during quests or random encounters, but luckily you can save anywhere and you can use Horse (yes, that's the name of the horse) to travel rapidly on the main map and avoid every attacker! Nice!
The quests are different, and besides fighting trolls you have to hunt outlaws, help old ladies, find and retrieve a rare egg, locate lost items and so on. 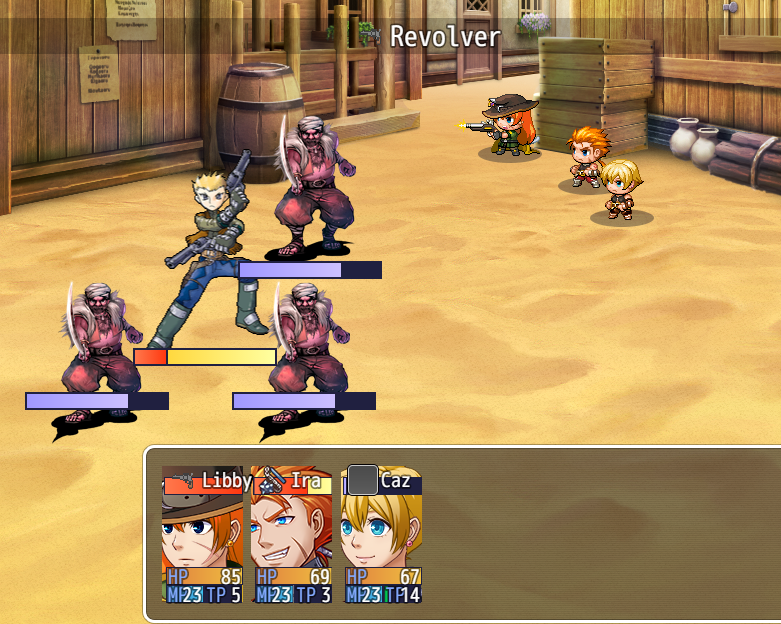 What's can I find to complain? Well aside from the desire of more, and I mean more quests, more dialogues, more characters wandering the maps, more monsters and more adventures, maybe there is the fact that this is just a really simple and short game but there are no bugs, typos or problems, so I appreciate it a lot, despite the simplicity of the maps and of the basic resources used (speaking about graphics and sounds). But these are used very well (and appropriate to the situation), and earns also a bonus for trying to recreate a particularly unusual setting, for what concerns the Rmk games.

Verdict
The Sunset Sheriff is a "light" game, a game you can pick and play anytyme, then resume to see if you can find all the quests and unlock all the companions. Nothing else, but it is well done and with no errors/issues found (I can also excuse the semplicity of map and the lacks of characters since this game is set in a small town in the middle of a desert).
No big quest or world shattering experience that will last 30 hours or more, but a nice little, easy and relaxing adventure in a (very) wild west. Or, better, a series of many little adventures that contribute to form an original enviroment and situation.

This earns 3.5/5 for being a little and pleasant surprise.
Now saddle up and ride your horse!