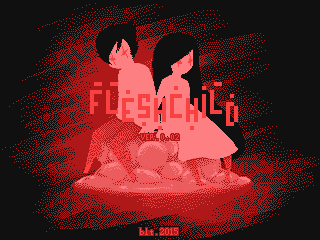 author=Puckerooms
Hello! I just downloaded the game, unzipped it, but it won't start? It says I need an rtp nit I dont know which one to download or where a safe version of it is. Please help, I'd love to play this game

Hey, just download the version that says "with RTP" in the downloads section, thank you!

author=Nakoruru
Is there any ecchi in this game?


Absolutely not! It sounds ecchi, but as it was an expanded university project and was an adaptation of some classical literature, it is appropriate for all audiences.

author=Beuregard
Hello!
Can you tell me the translation in english of Jasei no In? I'm very curious about it!
(sorry for my bad english)


Its meaning is actually very close to "the serpen'ts lust/desire/love" :)

01/30/2017 05:06 AM
This is honestly one of my most favorite games I've played on rmn! Imo, this is truly a dev's game; a lot of the gameplay gets really fun down the line, it requires patience, but once you get there you really enjoy it, especially as a rpgmaker dev. I truly do like this game a lot, I think art and the technical skill is inspiring. Thank you for making this game. c:

author=Mirak
I'm stupid and don't know what to do after waking up from the first dream, i go to the hospital and the area is closed by police tape and puddle form won't go under it and i can't cut the tape with the scalpel i found.

Go back to the alleyway where you exited the sewer and you'll see a diagonal path to the upper right is open.

author=reveohw
Thank you for your answer.

Now for the exact meaning of my words (I never though the spoil function was just the hide function, used to the norms of another forum).

Show
The Huntsman did not kill Avel for the first time so Lenora could spot him in his bloody wolf form. Avel is said to be ready to have his brother killed but not by his own hands. So I thought maybe Cayne at that point was not totally ready to behead his brother with his own axe.

Or could be as you said, just left him alive to screw with Lenora? (Nah, that means he knows Lenora would leave)

Yeah, I see what you're saying. Like, if they felt the same sort of hesitation, right?

Show
Avel knows Cayne better than anyone, and said "He beat me something fierce and slipped away before you came here. He likes to do things like that. Tricky bastard." Cayne only let Avel live to mess with him and Avel knows it. The main difference between Cayne and Avel is that Avel intends for Lenora to kill Cayne 100%, technically keeping his hands clean. Cayne, in every ending except for Lenora killing Avel, always kills Avel himself. Cayne doesn't really have issues with killing Avel, he's just sadistic, pretty much!

author=reveohw
I don't know how to use spoiler tag, trying my best not to spoil.

Say... Does Cayne have a trait similar to Avel's in the bonus room's description as to why Lenora could find a bloody Avel in the den at first?

When you say bloody Avel do you mean
Show
finding avel's bloody wolf form first, or finding avel's bloody half-human form first?
I can't tell if your wording means you found a bug or if I'm bad at reading. IN ANY CASE I get what you're trying to get at, and I think, with Cayne, it's hard to say. I think there might be little heart in there somewhere, because as the bonus room implies, he was probably different in the past, plus some of his actions before the events of the game imply that as well.

However,
Show
Avel does say he's tricky, and Cayne's monologuing also shows how he just likes to screw with people and kind of gets off on it too. If anything, the dude is pretty unpredictable. He appears out of nowhere and seemingly helps the village for a good time, maintains this perfect if a little bumbling guise as a happy-go-lucky huntsman, defends the village in one ending before abandoning it, appoints Lenora as his apprentice and spends years hunting with her while she's none the wiser in another ending, or goes on a full-on rampage when he's discovered by her and kills her. All of the endings where he clearly lives, he does end up killing his brother by himself. And in the ending where he "dies" to the wolf, he could have just run away after Lenora killed his brother, or continued to screw with the remaining pack.

At the end of the day, Cayne is dangerous and unpredictable and probably only keeps it together in his sane endings because he got to kill his brother like he wanted, but he isn't evil incarnate because he: subtly warns Lenora to stay out of his business instead of turning on her on the spot, if she agrees to stay the night at his cabin it's completely without incident, he doesnt slaughter the villagers in a sane ending, and he seems perfectly fine with Lenora tagging along with him for years without incident. Dude's hard to understand on principle I guess lol

author=white_sheba
Hey, bleet!
My name is Anna, and I wanted your permission for translate this game and "The Huntress of The Hollow".
Thank you! <3

You have my permission, thank you for offering. c:

author=JoelMB
Well this is first unfinished game I play in sometime and I love it!!! Like how we tthis evil crawling horror. Cannot wait for the next installment.

Thank you! I'm working on the next installment as we speak. c:

author=Zeebree
Omg! I can't believe its finally released c:
I've been looking forward to this game <3

Ahh thank you! Though, it's only "released" in that I put it on rmn. The game is still unfinished for now.

author=Jackarais
Just got me a nice pair of human arms for my boyflesh body. Really enjoying this game so far. The sound design is fucking superb. Keep up the great work, Bleet!