In 2015, the number one question in the community was – is moving to MV even worth it? Many believed it would be better if Kadokawa and the fans would keep improving VX Ace.

Degica published Kadokawa’s newest RPG Maker engine in October of 2015. Putting aside the common contempt many people display towards this software family and the games it helped to create, even the RPG Maker community welcomed the launch of RPG Maker MV with rather mixed feelings. The previous editions, VX and its updated version, VX Ace, already received a lot of improvements, additional resources in official stores or free images made by fans. 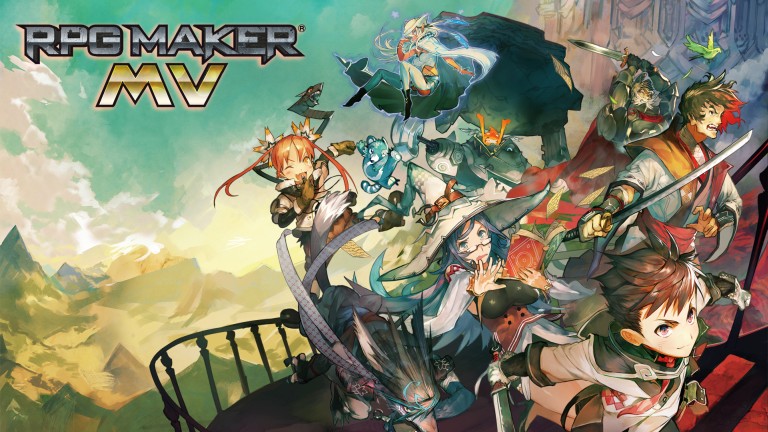 What is also important, VX and VX Ace use Ruby as their core language. Fans were making a lot of software-improving scripts (“programming tools for greenhorns”) and since MV replaced Ruby with Javascript, this entire branch of upgrades was completely incompatible.

The number one question in the community was – is moving to MV even worth it? Many believed (or still believe) it would be better if Kadokawa and its fans would instead keep improving VX Ace, without dividing its focus between one already tested and popular engine and one which still has a chance to become a massive failure. And to be fair, time proved that this argument was completely relevant – many of VX Ace resource creators and script writers stopped being interested in making new content or switched their interest into the world of MV. 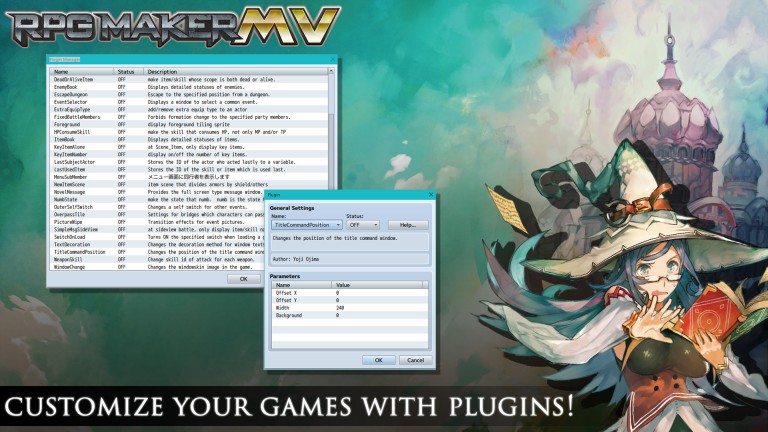 The oldest MV reviews are also not very encouraging. Lack of decent tutorials and examples didn’t help newcomers. Multiple important bugs were noticed very soon and the games using this engine turned out to have surprisingly large hardware requirements. There were even some game-breaking bugs which annoyed majority of the clients. Some of the reviews claimed that since MV uses Javascript it’s definitely more noob-friendly, but the lack of interesting plugins and other resources made it also very limited and not as fitting for more experienced and ambitious developers. In many, many reviews you can find the same point – in comparison, VX Ace had much more to offer, so there was really no point in purchasing MV, especially if you already spent years practicing Ruby. And it was definitely a fair perspective even through the major part of 2016.

However, the months went by and many changes occurred. So many that I believe MV deserves a second look. Not a basic “what is this software and how does it work” since you can already find dozens of such descriptions, but rather – did the flow of time make it any better?

And I think it’s exactly the case!… Even though a major part of it is in no way the result of Kadokawa’s input. Let’s make a list of some minor and major improvements that may influence your developing process:

• Most of the issues were patched – Many people pointed out that people responsible for MV are taking way too much time fixing the engine’s issues and patching it up. While it’s definitely true, the official patches fixed most of the problems the core engine had to struggle with (not all of them though). Not only that, but the engine also received some new features which make using the software’s UI much more pleasant, faster and more functional.

• Strong YouTube community – An important problem of original MV release was lack of decent support for people wanting to learn the engine. Currently not only there is more official tutorials, but you can also find dozens of amazing guides (with examples!) on YouTube. From basic “let’s make a game!” to complex “how to use this weird-ass plugin that makes everything completely different”. There are also cool channels constructively criticizing games made in RPG Maker which can help you avoid repeating some common mistakes. If listening to English is not a problem for you, you’ll find answers to almost any question you can have. And if your question is not answered, you can always ask on large Facebook groups and forums for help.

• Hundreds of amazing plugins – And I mean it. Some people actually make a living from Patreon support by offering the community more and more plugins, and some of them are completely replace the generic RPG Maker design. Most people still experiment with various ideas and functionalities, but the famous Plugin Master List already makes my head spin. Many of these plugins also received a lot of tests and were updated in many ways and spawned their sub-plugins.

• A lot of cool free resources… – Even though plugins are the most important and money-saving parts of the fan activity, dozens of people put other royalty-free resources online. Some of them are basic recolors made in Photoshop and are based on files offered with the engine itself (so called “RTP”), but there is also a multitude of cool graphics – tiles, additional details for character generator, animations, creatures and so on. Obviously, most of those resources work best when they are edited and improved to support your game’s overall feeling, but hey, that’s a strong starting point.

• …which are not even that scammy! – Unlike during the infamous RPG Maker past, currently there is a lot of attention put into tracking copyright scams and illegal resource modifications among the uploaded games. Obviously there is still a lot of people stealing from every place they can find, especially among children trying to make their first game and make a quick buck, but you can easily avoid the sites you shouldn’t trust and just stay close to trustworthy forums and websites.

• Parallax mapping works great – Even though RPG Maker engines are all about square-divided areas and tileset-based mapping, there is plenty of ways to replace this system with so called parallax mapping (which means – replacing your maps with hand-made images). You can also use plugins like Yanfly Doodads to add details without being restricted to grids. There are also plugins allowing your characters to move on the map in more flexible manner. Even though Kadokawa doesn’t really do much to support this approach, there is still more and more options thanks to the community’s effort.

• Exporting to other platforms works slightly better – It’s still somewhat limited and in most cases requires at least some knowledge about programming, but, well, it works. Sort of. Sometimes. Is there any good MV game for Android? I see this question quite often, I never saw an answer.

• You can often buy it on sale! - If you have a lot of time, you can often find some sales offering a Steam version of the engine for -50/-60%. And since the original cost is pretty high, it’s quite a big discount.

• Linux version of the software is now available as well – And, I think, it’s pretty cool.

However, we need to remind some important problems as well:

• Performance is still far from perfect – Many players who give a chance to games made in RPG Maker engines do so because of having pretty old computers. And bad MV performance is going to disappoint a lot of them. I personally am quite upset about issues with using large music files – and since we are forced to use ogg files, they are, indeed, all large.

• Steam Workshop is a pointless trollfest – It looks like Kadokawa completely gave up on promoting Steam Workshop for MV. The majority of content there is joke games made in 2 hours. The resource communities are all gathered on forums, so Workshop is pretty much worthless. 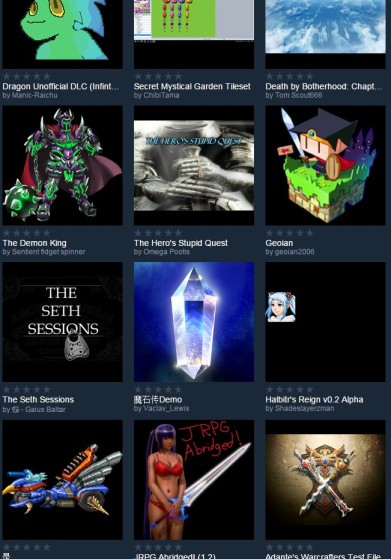 • The official bonus resources are weak - The funniest example I can find is the infamous Sakan, a 30 USD graphic software for easy edits and imports of in-game graphic files. It’s basically a very easy (but also hilariously limited) GIMP that should be offered for free. Some of the DLCs have nice graphics (especially animations), but majority of the Season Pass, royalty-free music tracks and other resource packs are worse than free content from forums. 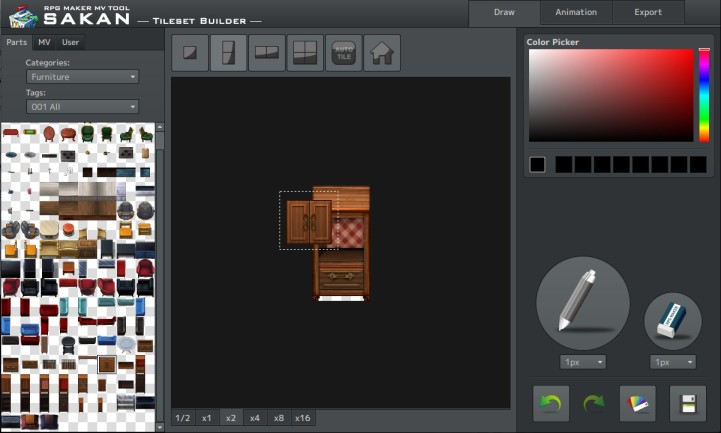 • Looking for free resources is very problematic – It’s obviously not Kadokawa’s fault, but to collect a decent base of free resources, you have to spend at least a day searching through dozens of threads. However, since many of them are pretty old, various resources disappear or get lost without a chance of recovering them. Such a shame.

Overall, RPG Maker MV became a piece of really, really good software. I can’t judge if it’s better now than VX Ace was during the peak of its popularity or if moving away from the VX/Ace versions was a right move, but the old arguments such as “it doesn’t have enough plugins!”, which are repeated by many VX Ace users to this day, are sort of out-of-date. MV now is superior than it was in 2015 in every way and it deserves another look, even though it’s not perfect.

Close
08/19/2017 12:54 AM
Moving to MV has been something I've been debating since the day it launched, and I honestly keep going back and forth on it.

I think it's amazing that they're offering so many resource packs, and helping artists and resource creators get some material out there. With that in mind, I would be more likely to make the jump if they started offering more utility-based resources. The release of SAKAN, as controversial as it was, really gave me hope that there was a UI tool like Luna Engine in the works. But I feel like it might never happen due to SAKAN's lukewarm reception. (If anyone from Degica is reading this, release Luna Engine MV pls :3 )

Aside from that, I've never felt like anything that MV does over Ace was anything I particularly needed, as I'm sure people feel when comparing 2k3 to Ace. A bit of a "stick to what I know" situation.

Close
08/19/2017 02:11 AM
Might be a good idea to add this link to the article: https://forums.rpgmakerweb.com/index.php?forums/editor-suggestions-and-improvement.168/

It's a place where you can help with the engine changes.

These are the approved changes that will occur.
Rukiri

Close
10/07/2017 08:57 PM
I like MV but I have a few problems with it...
- It's heavily based on web/html5 platforms
- Mobile performance is lack luster on flagship phones and probably even worse on lower tier phones...

Desktop performance is great however because PC MASTER RACE :)
I feel the desktop should have had more focus and there are far better ways to implement javascript than how it was done...
hedge1

Close
10/30/2017 02:48 AM
I don't have much to add other than saying thanks for putting this together. I am very intrigued by MV, but (as mentioned) the initial release left much to be desired. And since I haven't really had to time to keep up with MV development, sharing what you've learned is very helpful. I wonder if they'll make an "MV Ace" or something to finally fix those performance issues?
kory_toombs

I think they'll call the next one MVplus because they don't want to remind people of VX or VXAce. But as it is I don't see a reason for a next one... Unless they do a tactics maker. Otherwise Ace is still the best imo (despite the options to export to Mac on MV.)