Revisiting after Jamie is complete? Unlikely.

I really wanted to finish this project, and I was easily more than halfway through everything, but life got in the way. By the time I got back to gam mak, I was doing commission work and barely had time to even look at this project.

I suffered a hard drive crash earlier this Fall, and I'm not sure if I have a backup available for this particular project. I'll do some digging and if I can salvage it, I'll do what I can! But Jamie takes priority since that project has all the momentum at the moment.

Edit: for some reason, Solitary is the only personal game that I had failed to back up. This is really painful because I've become a little obsessive about backing up my projects and this is the one thing that I failed to complete. I was proud of the work I was putting into this project, including that giant dual tower map. Such is life, I guess.

I will be marking this canceled. If I do revisit the project, it will likely be in MV or MZ using upscaled resources, and I won't post a gamepage until it's complete.

I just wanted to apologize to those who were following this game last winter. I was unable to live up to my word and get this thing done, but I did a lot of experimenting with this project and I think I can make it even better in MV or MZ. Perhaps I'll revive it for the next competition!

So yeah, it's been a while. I was supposed to release this game a year ago before setting it aside last February and never touching it again, until yesterday. Looking back, I'm pretty pleased with some of the progress I had been making - the mapping was done and almost all of the systems were evented. I had written design documents and had even scripted out certain cutscenes. I think it's time that I make an updated demo to show some of the more refined mechanics that I've added, as well as to showcase more of the story.

Make no mistake: this will be a small game of about 1-2 hours, and it's on an antiquated engine with a turn-based battle system that most people despise for some reason. It's not War and Peace or anything. I just want to finish telling this story and make an RPG for myself, on my own terms, and with an engine and resources I absolutely adore - something I haven't done in a long, long time. If some people end up liking it, then that's even better.

I felt amazing while I was working on this game, even though I was very ill physically during the process. Ideas came to me in waves and I was feeling the physical high caused by a rush of creativity - one I hadn't felt in so many years. I missed a week of work while sick, and I spent that entire time brainstorming ideas, wasting time with fun (but trivial) tweaks in the engine, and trying to decide what kind of story I wanted Adfer to experience. Ultimately I chose a rather sentimental journey for this protagonist. We'll see how it pans out.

No longer sick - back on track

I'm feeling much better after probably the worst illness I've had since 2011. I've been making a few adjustments since I've had time to reflect:

Character Progression
Adfer and two other characters encountered throughout the journey will grow stronger by (1) equipping powerful items, and (2) consuming HP/STR/MGK Seeds. Each character has a limit to the amount of Seeds they can consume per category; this cap may increase at endgame. Equipment hasn't changed much: some is high STR, some is high MGK, and some is balanced. Players will also find special necklaces that enhance the SP system, relics that aid in defense or utility, and weapons with special attributes.

Players can also "recruit" non-sentient monsters that start at level 1 and can be increased up to level 5 by consuming Orbs. Each level provides stat gains and (potentially) new skills. You can use pretty much any monster for the main quest, but some of the optional bosses will be tuned with specific monsters in mind.

Shop Mechanics
I'm including recovery items at the shops; initially the shops were going to be reserved for equipment only, but that's a little harsh. I want this to be enjoyable for its story as much as its gameplay, so I don't want to make it too hardcore or tedious for casuals. There will be plenty of treasure chests, so don't worry too much about having to buy EVERYTHING. I'm going to try and tune things so that the equipment will appear as treasure before it's added to the shops. There's nothing more annoying than buying gear and then finding it in a treasure chest. 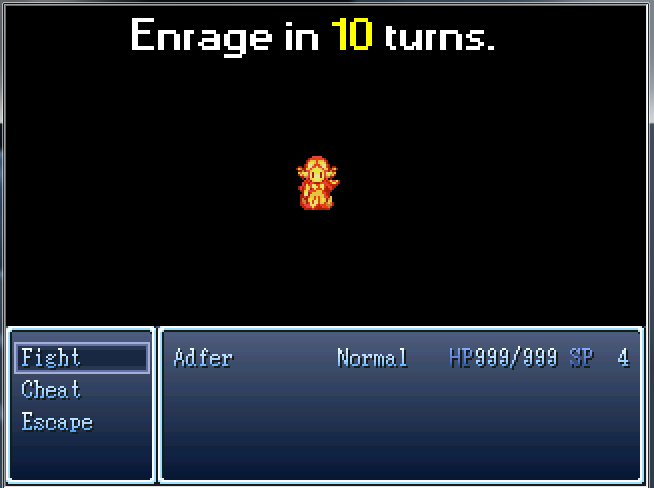 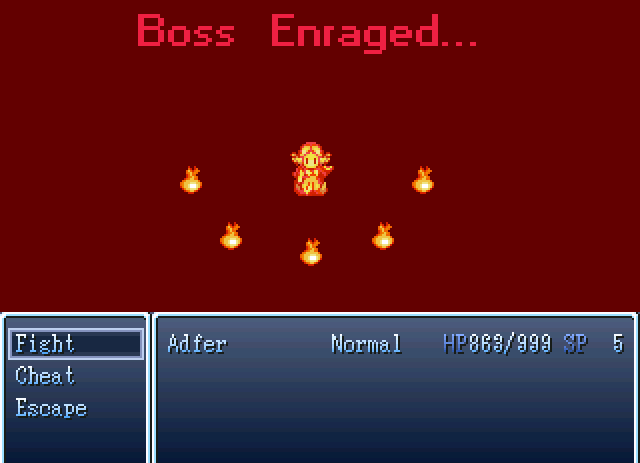 Some bosses get really ticked off after a while and start unleashing powerful attacks. In other words, they have a turn limit - also known as an Enrage Timer for those familiar with the MMORPG genre. This mechanic prevents players from playing super defensively and effectively cheesing the system. In the main quest, these enrage timers will be very forgiving. Optional fights, however, will have enrage timers so tight that you will need to be min-maxed and have a plan going into the fight. This is how optional content should be.

I ended up with a double ear infection and the early signs of bronchitis, so I just haven't had the long-term energy I hoped to have. I've been able to putter a little bit every day on the project, but it's been difficult because I have to save my strength for work. This WILL get finished sooner rather than later, so I thank you for your patience!

Last week, I finished all of the more involved eventing when it comes to the gameplay systems. The (admittedly simplistic) custom systems are all squared away, and all that's left on the gameplay/database front is balancing everything.

I'm also adding a very small area at the end of the game for the sake of pacing - I didn't want a huge block of cutscenes with nothing to do in between except the final couple of bosses. Pacing is key!

The final game will be between 60 and 90 minutes, from the looks of it - maybe a bit longer if you go to town on some of the optional bosses that are meant to push the battle system to its limits.

So I came down with something pretty nasty so I'm gonna have to push this whole shebang back another week or so. Thanks for your patience!

I posted a 10 minute demo for the Seasons Event! Complete game is coming in a few days, probably around January 21. The demo consists of the intro, the first area, and the first boss. Most of the framework is set up. Overall, expect the demo to last between 8 and 12 minutes.

Any feedback would be greatly appreciated! This is my return to solo projects after a few years off (and as a break from some of the commercial games/commissions I've been working on) so I could use all the love :)

I started this game maybe 3 or 4 days ago when I was making three small maps for Arcmagic's Seasons entry. Coincidentally, I was falling in love with the song A Change of Seasons yet again, which deals with loss and seizing the moment and the darkness of winter and all that fancy P R E T E N T I O U S stuff. Being kind of a pretentious and broken idiot myself, I figured I'd try to make a seasons game before time expired. Here's where I stand:

Now it's just time to execute the combat system and the cutscenes and playtest. I'll finish the database tonight and spend the next two days on cutscenes.

Initially I wasn't gonna have battles, instead opting for a "REFMAP Exploration Quest" like the Manor Map Madness games. But I like turn-based combat; it makes me feel stronk. And it helps pace a game, especially one as "heavy" as this. So yeah, I'm doing battles.

I'm borrowing some ideas from Xenosaga's stamina-based approach to MP: you have 6 MP and the gauge begins half full at the start of combat. You replenish one MP per turn and can charge up an additional MP, if desired. Regular attacks cost 0 MP; basic skills cost 1, cleave skills cost 3, powerful skills cost 4-6, and so on. Certain equipment will affect this system (e.g. a necklace will increase your max MP by one, another will increase MP regen rate to 2 per turn but inflict you with nasty status ailments, and so forth.) There will hopefully be some synergy here, despite the game being extremely short and made on a time table. I could always expand the ideas if they seem like they have potential.

Levels are boring. Enemies have a chance to drop orbs (or whatever) that boost one stat of your choice. If you apply the Sunder debuff to enemies, you can absorb their consciousness inside the (K E Y I T E M) Encephalator and get some pretty cool rewards, including orbs or even equipment and skill scrolls. There will be no shops in this game - no money - but there will be recovery springs scattered about as well as a ton of treasure chests.

At the end of the day (quite literally), I just want to make something simple and enjoyable in the time I have here.
Pages: 1