So, it's been a while since I've done an update on any of my projects, but I wanted to start up again. Everything is fine, I just got distracted with other games (I blame Steam and their many sales). However; I am still working on my projects (back and forth) from time-to-time, and I plan on starting up again really soon.

With this update, I wanted to share some concept art for three characters you'll meet in the capital city of Sardonia. These are just a few of the many NPC's you'll encounter in Tales of Yuria 2. I'll be sharing more artwork soon.

Mama Jude (left): Shopkeeper of The Shiny Coin, a bartering shop where players will be able to take rare items they find and exchange them for other useful equipment.

High Priest (middle): One of the high priests of the Divine Order.

If you'd like more frequent updates, be sure to join my Discord server. You can ask questions, chat with others, and even join me in voice chat while I work on my projects :-)

I'm excited to announce that the prologue of my game is complete. While many would think, "Wow, so the first 15-20 minutes of your game is done?" Not really...

ToY2 Prologue:
I mentioned in a previous blog post that my game is divided up into chapters. Before you begin chapter one, however, you'll experience the 4-5 hour prologue. "SAY WHAT?! 4-5 hours?!"

The reason my game's prologue is so long is that it's broken up into four parts: Skylan, Senn, Kagmaar, and Lacillia. You're going to play a short intro for each character (roughly 1.5 hours each), but when you reach the end of one, you'll start another. You'll see how the four main characters come to arrive in Sardonia, how they meet up, and, ultimately, join forces to take on their primary objective of the game.

Now, before you think this is 4-5 hours of story and dialogue only, it's not. Each character has their own unique spin, introducing different aspects of the game: dialogue choices, combat, shopping, alchemy, gathering, and upgrading skills and equipment. Plus, there's four mini-maps to explore full of monsters to fight, items to find, and a few puzzles to solve. Once the prologue ends, you'll start chapter one, and play as the main protagonist, Skylan, for the rest of the game.

However; before I start on chapter one, I need to play through and test my prologue a few more times. I also want to make sure everything is complete before I start the first chapter. I still have some artwork to get done, combat to flush out, and a few more additions to add. That's what I'm currently working on now. I'll continue to provide updates on the progress, so stay tuned!

Game Page Update:
I added some animated GIFs for each party member's SV Battler, along with some better headers and a custom image for my game's title at the very top. This is all thanks to my game's artist, CChameleon (artwork & thread here), and my bestie, Stephanie. She's the one that created my Tales of Yuria font/title, this page's headers, my Gray Bard Gaming logo, and she's the beautiful singing voice for my title screen, which you can hear on my first Developer's Update. She's been an amazing friend, and I love her for everything she's done for me.

However; this is just the first step of making the game page more visually appealing. I'll be adding some additional artwork and screenshots to bring the page to life even more, and you can also expect some updates to my game's lore, including the history of Ostragen, and the people and races that inhabit the land. So, keep an eye out for these updates,and make sure you subscribe so you're notified when a new blog is posted.

Also, don't forget to join my Discord, Twitter and/or YouTube channel. Thanks and see you next time! :-)

I have officially created my YouTube channel for Gray Bard Gaming, along with my first developer update for Tales of Yuria 2: The Gilded Crown.

In this video, you'll see the first gameplay footage for Tales of Yuria 2: The Gilded Crown, and learn about the vocal tone dialogue options and how they can impact your party relationships.

Welcome to my first Game Design blog for Tales of Yuria 2 :-) I'm very excited to start doing more of these and share updates as my game progresses. I'm also creating a YouTube channel and will be posting gameplay videos very soon. For now, I've included a couple of topics on my game's mapping, some reworks I'm currently doing, and an update on combat. I also have a quick development progress update. Hope you enjoy and feel free to comment any ideas or suggestions you may have.

MAPPING REWORKS:
Some of the biggest feedback I got for ToY1 was my mapping. I made most of them too big with a lot of empty space, so that's an area I've been focusing on in ToY2. In some of the screenshots, you'll notice the shops and interior of my buildings have been greatly scaled down, and I'm now using the FSM tilesets, so the look and feel has been updated and improved upon, as well.

The one idea I've been back and forth on is parallax mapping. It looks amazing and does give your game a unique feel, but I also know this greatly increases the size of the file, plus can cause performance issues for some players. At this point, the scale for ToY2 is larger than my first game, so doing parallax mapping for all the outdoor maps, dungeons and towns would cause my game to be extremely large from a file-size standpoint, so I've decided against this.

However, I have decided on a few changes I'll be making to my mapping to help improve on the visual appeal a bit further. None of this reflects in the current screenshots, but I plan on updating those very soon.

1) I'll be utilizing Yanfly's Grid-free Doodads plugin. I'm currently going through and revamping my maps to give them a bit more detail and less of a blocky/grid feel.

2) I'll be using more overlays and animated doodads to give each map a different feel and atmosphere. I recently got Plueschkatze's Animated Doodads Graphic's Pack to add fireflies, dust particles, water droplets, and a few other animations. I have considered a few custom-made animations for the game, as well. I just need to commission my artist for these.

I've included a new screenshot below to showcase some of these changes.

COMBAT & BATTLE SCREENSHOTS:
I've received a couple of questions: 1) Is there any combat in my game 2) Why are there no screenshots of the game's battles?

Yes, there will be combat in my game. The reason I haven't posted screenshots is that I don't currently have any monster artwork finished yet. On my game page under features, I mentioned enemies will be custom and fully animated, so I will be showcasing this at a later date. My artist is still working on some character models, and I plan on having a custom icon set, balloon animations and some additional doodads added.

My side-view enemies will be further down the road. Mostly because I'm still trying to decide on which type of monsters I'd like to have for each dungeon, and I'm currently writing those into my script. Since I'm commissioning custom artwork, I'm wanting to get creative with my monsters. I will say, however, that my favorite type of enemy in any game is undead and the occult... so you CAN expect to see zombies, skeletons, and demons make a re-appearance, and I've also considered vampires.

I'll be sure to post some screenshots for combat and showcase a few enemy sprites once some of the artwork is complete. If you have any suggestions or ideas on monsters you'd like to see... feel free to comment below.

DEVELOPMENT UPDATE:
ToY2 is broken up into chapters. While this will likely change (increase/decrease) during development... the goal is to have 9 chapters. I just finished chapter 4 over the weekend. However; I have not started working on chapter 5. I need to go through and make sure 1-4 are more polished. I still have mapping revamps to do, some additional dialogue choices to script, and I'm adding the party relationship variables, as well. More details to come on that in a future blog.

However; feel free to give feedback and suggestions. I'm still in early development, so I'm open to new ideas right now if you have any.

That's all I have for now, though. It's been a crazy year for everyone, so I hope you're all staying safe and taking the proper precautions. HAVE A GREAT DAY! :-) 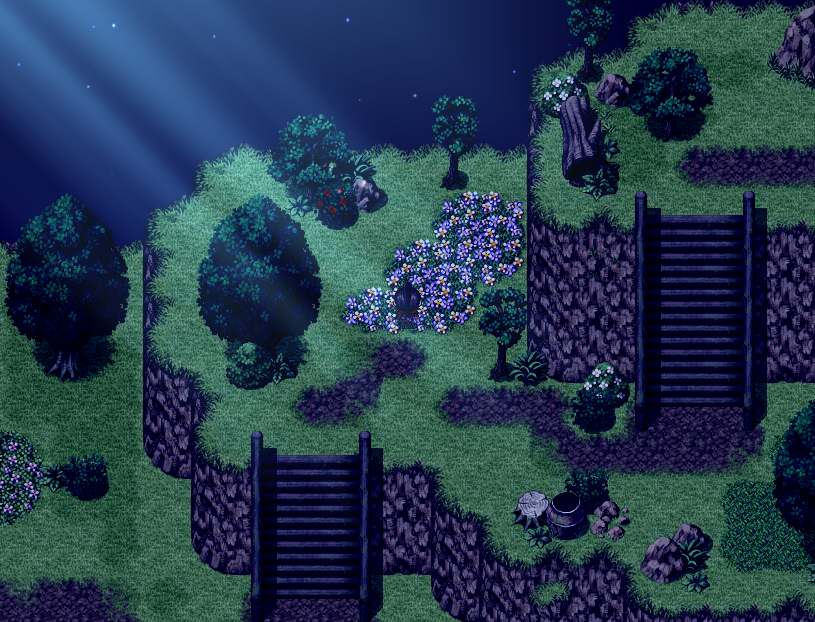