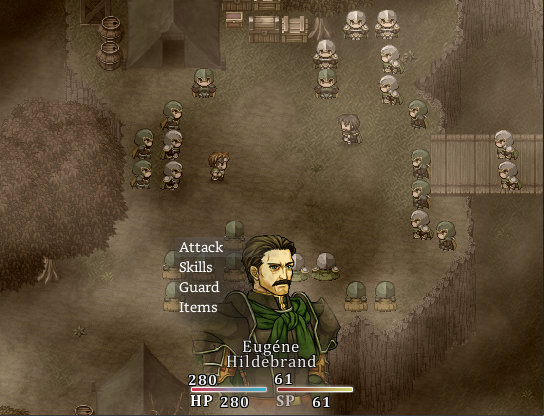 I actually had to abandon the tactical battle idea, unfortunately. It was just way too complicated and it was bogging down development. So I ended up switching back to a pretty traditional turn-based battle system. It was a difficult choice but I want to get this game finished at *some point* and having to deal with a completely custom battle system was slowing me down way too much.
Cap_H

Close
06/08/2017 04:42 AM
@BluePeriod:
Yeah, "Legend of Aldor" was going to be a Tactical-style Battle System too, but it was too hard to understand. I agree with you. I don't know which style of Battle System I'll implement in mine, if I even put one in it (maybe it'll all be QTE's instead, I don't know yet). As long as there is progress, right? It seems you've been doing a lot in LINUS lately. ;)
blueperiod

Close
06/09/2017 04:21 AM
QTES sounds interesting! Actually, right now I'm thinking of creating Telltale Games-like "choose your own adventure" sections at the start of encounters where the player's narrative choices affect certain factors in a battle, or whether there'll be a battle at all. For example, before a fight, you could order an archer to shoot an arrow at a boss' arm, which results in that boss not being be able to use a certain ability in combat. Something like that anyway :p.

The goal is to have every single encounter in the game be memorable and meaningful, instead of having hundreds of throwaway encounters with monsters roaming the world. This means that there'll be fewer of them than in most games, but I've never liked the repetitiveness of combat in most rpgs anyway.
Pages: 1