A lesson in style

The Cicatrix is a very particular game:
while being rather classical and not overly original in some aspect, it provides some original details and features rarely found in other rpgmaker games, such as:

Crowded locations!
Yep! A game I played a looong time ago had just five citizens in the capital city, but here? It's completely different! Every location is crowded, cities and villages aren't just big empty maps or locations with some identical individuals, but they come to life with really crowded locations. It's something I immediately noticed from the first village. Oh and there aren't just more people, they are also nicely animated and full of life, speaking about animations...

Details and more details!
Speaking of animations, not only the main characters have lots of details and little movements (you han also swim in some locations) that are ininfluent but show a lot of attention(for example they remove their weapons before going to bed). Wait there is more: every map has lot of tiny details, forget the big, empty rooms. Here you will find nice scenarios and enviroments with breakable items, sheets of paper that will move if you go closer, and a day and night cycle that change some details on the maps (for example the stalls will be empty at night) and includes occasional rainfalls.
Then the music. I liked a lot the choices as for the most parts sounds seemed new to me, also the action and combat sections in my opinion have some the best choice of music themes I have ever heard. 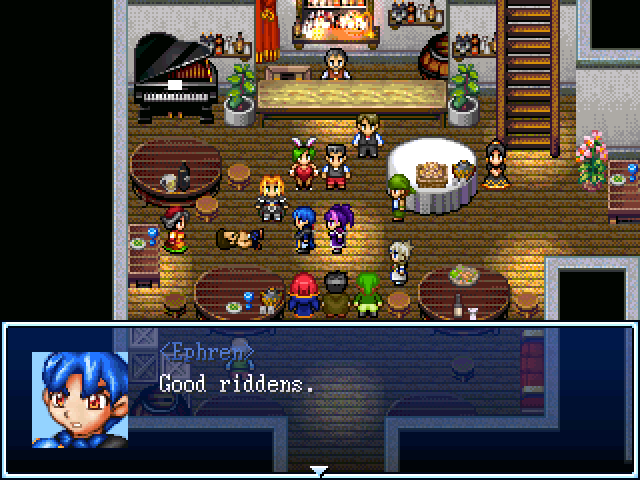 Combat and other pastimes
Ok so let's speak about the gameplay. Combat is classic, turn based combat with side view battlegrounds and nicely animated battlers. I did not find any option to set the WAIT (easier) combat style, so be quick! Combat is hard but fair, don't expect to have many equipment choices or tons of gold to buy a plethora of consumables. You won't! But hey this isn't needed as you can recharge some energy points spending one action in combat and then heal yourself with a skill you will learn after a while. So it's ok. Oh and sometimes the protagonist enters an "Enraged" status that lets you unleash a powerful attack.
Enemies are always visible and avoidable, except for some unavoidable battles. It's suggested to keep always some emergency consumables, just in case things become difficult: opponents usually do not have a ton of hitpoints, but they hit fast and hard and have some powerful moves, so kill them as soon as possibile!

Ok, so this is combat, but course there is more: there are puzzles (not too hard), and other activities like the classic "diplomatic section" in which you have to choose the right answers during the dialogues or the "fetch quests" in which you have to provide some items that are scattered around town to a villager.

Story and characters
The story starts in media res and then it is gradually explained. I like that because this isn't the classical story of the predestined hero looking to defeat the great evil, instead it's about a conflict among different countries and characters that are never totally evil or good.
Writing is ok, in my opinion, nothing to report and I find everything well done.

The game uses some edits classical facesets that well define the character's mood, not unlike The Way... well some particulars of the story also make me think to the Way, besides the graphic style (the protagonist is a blue swordsman, his best friend is a red veteran warrior, there's a mysterious killer, etc...)

A plus is that there's a lot of hidden subquests and little secrets that reward exploration (one of them is a quite long subquest that I totally missed the first time I played!). 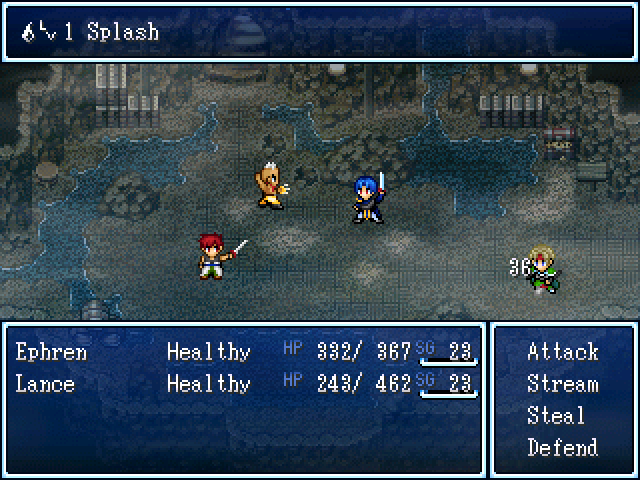 The baaaad
Ok there are a couple of spelling errors (just a couple), the npcs sometimes hinder your movements (but just leave and re-enter the map, if you have any issue... strangely I had this problem only in one of the less crowded places, the road to the Arena, in which just one peasant blocked my path!), combat is ok but not exceptional (characters starts with many skills but I used just one or two, that are clearly better, also I missed the Wait option, but maybe I wasn't able to find it), but the biggest problem is that this game is a demo so you will yearn for more, if you liked it as much as I did.
Anyway I did not find problems or bugs or errors, except maybe for the strange uselessness of the savepoints in some areas (in the loot cave and during the last parts of the demo) as you can save anywhere from the menu! But hey, nothing bad to report.

The Verdict
The Cicatrix is time well spent in my opinion: ok it's a demo, but a good one, a rough gem like others I played before. But what I impressed me, it's not just the fact that I had fun and I was intrigued by the story (as this already happened playing other games), I was also impressed by the beauty of the maps, the richness of the details and the amount of work that was surely done to make all this.
4/5 is deserved!