Hello!
And welcome to another episode of: great demos of the year 2021! This time I'm talking about Nihilo.
This game is a postapocalyptic rpg adventure in which we play as Estes Cline, a survivor of the Calamity that changed the world forever. He was only fourteen years old at the time, but ten years already passed from the Months of Blizzard that decimated all lifeforms on earth.
So Estes together with his friend Nikolai Lincoln leaves Jupa, his hometown, to go to the north and make contact with other survivors. The two boys have also others wishes: Estes wants to see Makal, his birthplace, while Nikolai is searching for the man who betrayed his father.
This will be the beginning of a long journey!

Ok, first warning: this review has no score because it's about a demo, and we still do not know what else the game has to offer. For example the demo is a story driven adventure rather linear with a couple of side quests that are totally optional, but we do not know if in the future it will possible to roam a map of the wastes, play minigames, etc.
So the demo focuses on the first chapter and stage of our two characters' travels (even if there will be a couple of flashbacks to explain something about what happened before the disaster, but not a lot, the game is focused on the first adventures of the two friends).

A lot of the demo is spent exploring various enviroments looking for supplies in this well detailed post apocalyptic world. Luckily there are some pink arrows that indicates the various access points that let you move from a map to the other, because there are so many details and things on the screen that otherwise it would be hard understanding there you can go (considering the presence of trash and debris that sometimes blocks the way... well done, in this case this was a good choice!).
There are many interactions and descriptions, then there are goods and resources that may be scavenged, sometimes these are found just looking around, but sometimes you have to perform some task, if the goods are locked somewhere. It's a dark future, so do not expect to find colorful chests of loot! 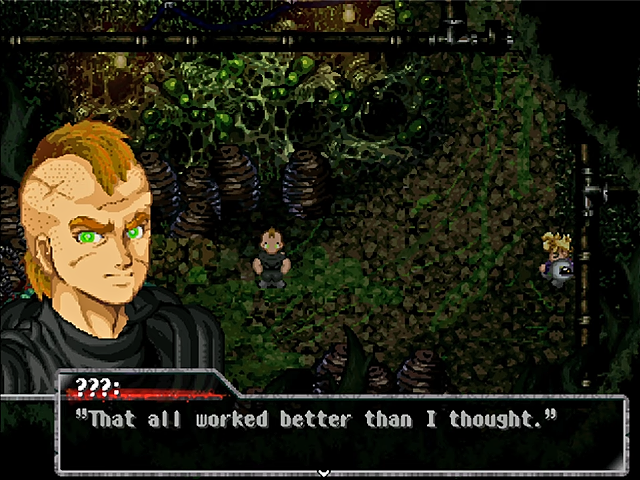 Who is this guy with a typical postapocalyptic warrior hairstyle? If he has a portrait he should be important! He's "???"! Heh play the demo and see!

Then there is combat, and I like how everything (including combat of course) is well explained by the tutorial. It's true that my very first combat dragged a bit, but probably it was because I still had to master the system (or maybe because first encounter IS also a boss encounter!), later combat encounters (including the bosses) were a breeze.

Combat is apparently the classical Atb system but there's a lot of strategy involved when selecting the actions of the three characters. Ok now you are probably asking why three if the characters are Estes and Nikolai... well the two have (or, better, Estes has it!) Auxi, a droid with them that provides support during combat (for example he can scan the enemies to find their weaknesses), and it's very helpful during the various encounters.
Then we have the two characters, that possess different weapons and skills: Estes has a sword that can unleash the elemental attacks, while Nikolai has a more mundane assault rifle that can shoot different kind of bullets. See? Each character has different options and that's why you have to choose your best attacks depending on the opposition.
Fortitude is also an important part of combat and it is made of two bars: the red one is fatigue, the green one is... uhm anger? LEt's say that when the green bar is maxed the characters may use their extremely powerful Rush Attacks (think as Limit Breaks), while filling the red bar of fatigue will make the character suffer more damage. Each one has its methods to build Fortitude: Estes when he attacks, and loses it when attacked, while Nikolai get it when he's attacked and loses it when he acts. If you play smartly to build Fortitude for both you may even be able to attack with a Unison Rush! That's badass and also extremely powerful!

Oh and mind that there are no random encounters: at least in this demo all the encounters seems to be mandatory (even if some can be avoided if you avoid some zones/optional tasks), so no need to grind (and no possibility to do that!), and this is something I likebecause makes the game more like an adventure (with carefully designed encounters and not a "battle-feast" of frequent randomized battles). 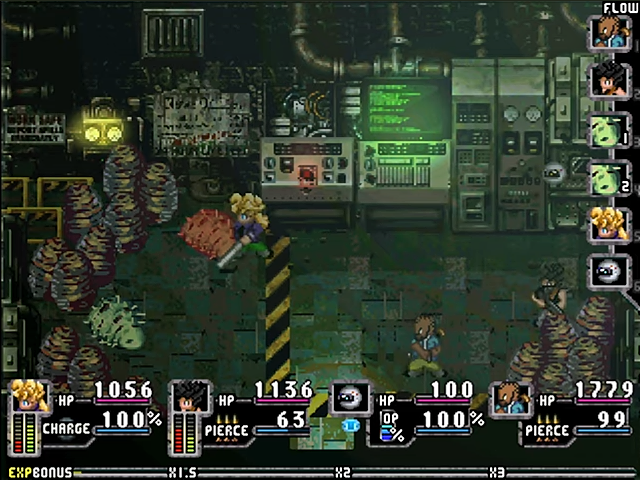 A furious battle against some big... uhm... maggots? And this time we have a friend with us! (anyway see that he has no Fatigue bar, unlike our heroes!)

But this is just the beginning: another important part of the strategy is developing your characters, because they do not level up as in other games, instead you get points to spend on their abilities to improve their skills (do you want your character stronger or tougher? Well, your choice!). And same goes for weapons, yes, you do not find new gear (at least in the demo, but it's not strange since in the apocalypse the weapon shops are just ruins, often already looted!).

A custom system requires custom menus, so forget the good old ones of Rpgmaker2003 and welcome those custom ones that are rather stylish and pretty simple to use. I like the icons in particular, and remember that you can also save your game from the menu, so no save points involved!

Ok, I mentioned the stylish and functional but still original menus, then let's go on taling about the graphics. The game, as I already mentioned before, is extremly detailed: broken lights flicker, the automated doors open and close, the wind scatter dust in the air, and so on... each enviroment seems to be carefully crafted and modeled (using both resources from other games, like the Metal Slug series, edits and custom made sprites), and feels unique. This contribuites to represent a realistic decaying world, where you can read messages from the hands of a dead survivor found among the ruins, or explore cautiosly some dark caves hearing strange sounds...
Yes, the world really comes to life, and speaking about life or better lifeforms, expect to find many creatures, mutants and abominations that are also animated in the battles, exactly like the battlers of the protagonists!
Oh yes! and characters are pretty too, from their charsets that have many different poses and animations, to the pretty and detailed portraits (reserved from the most important characters, but not just the two protagonists!).
Finally music and ambience sounds are carefully chosen and really appropriate to the various situations, nothing to say for this except... well done!

Ok, this is the end of the... presentation of the game. Well it's not a real review so no Final Verdict, since this is a demo and nothing is final. But trust me, watch closely the development of this game because just from the intro sequence and menu it oozes style and professionality.
And now play the demo. I'll be back!

Close
11/24/2021 08:49 PM
Wow! Thanks for the great review, it was a really good read!
I'm really glad you enjoyed the demo, and hope to satisfy even more with the full releases' new features and continuation on the story!

Thank you again for the review! It means so much to me that you took the time to write all of this!
TheRpgmakerAddict

author=Giznads
Wow! Thanks for the great review, it was a really good read!
I'm really glad you enjoyed the demo, and hope to satisfy even more with the full releases' new features and continuation on the story!

Thank you again for the review! It means so much to me that you took the time to write all of this!

Well yeah, I forgot to mention that I played the first demo from the beginning to the end... BUUUUT the new demo is even better with some fixes and more save slot! So it improved from the first version...
good job so far! ;)
Pages: 1