I've been slacking to update my blog as always... "Boooo"
But I wasn't slacking on RPG Maker, that's for sure! "Yaaay"


Since june I've been focusing on integrating a lot of playable characters in the game. Sprites rip, sprite modification and overall animation for each character could take between 2 to 5 days.


Since these 6 months, I managed to integrate 32 of them which brings me to a total of 120 playable characters out of 140. The 20 missing are like the "lengendary" or such.


I reached a point where I need to return to other stuff in the project, like continuing the main story and level design. I'm currently making the dungeon before the very last (without counting optional dungeons).

Also I need to update some old stuff such as the map presentation (I've been holding this for a year to be sure it would be the final pass).


The end is close but still there's a lot of work for 2020 which is supposed to be my last year for this project. I hope I'll make it!

It's hard to keep up with a steady motivation but at least I work 1 hour each day of the week, no less. Maybe I'll put an updated demo here at some point if some people are interested.

The project is still alive and well, I just don't give a lot of updates (as usual). My apologies!

Doing update summary can be quite long but.. I'll try to post new screenshots, at least, from now on.

Hello! Here's a very short update before the end of january.

At the moment, the total number of playable Simurions reached 88 out of a total of 120 (not counting the special end game Simurions).

There were 67 in the previous demo. I officially overtook half of them! It's a long process but little by little we'll get there!


Here's 3 of the latest I integrated:

Nuclemia has an ability that make its skills cost less SP, Lunarkaiser is protected against the "Bug" status and Yggdracell regenerates a little SP after a fight in the green.

When you reach a certain point in the game you will earn the "Space Traveler" relic. It's a practical object that allows you to fast travel between the different towns.

It's been one year since my last update, but no worries, I'm still working on it daily. I really should give updates more frequently, right?

About the project progression, I would say that 70% is done (even if it doesn't mean a lot). For the first time after all these years I start to see the end of it. Sure it will still take at least 2 years to be finished but there's less and less work to do to made it!

If the player learns this aptitude he'll be able to use a carrier pigeon to do some shopping even when he's in the wild. The only condition is to be in the open. Call the bird, do your order and it will be back quickly.

For each village the player go, the pigeon will be able to bring back new kind of items according to what the shops offer.

So does it mean the actual shops would be obsolete?
No, because you can only order medecine type items and not everything.
This is a good support aptitude when you're in a pinch in the middle of nowhere.

It's been a while since it was planned but now it's in. The first Simu-Com menu was functional but far from perfect. Thanks to DynRPG this menu will be far easier to use for the player and will have more useful informations.

-The levels, types and visuals of the Simurions are now directly shown within the list.
-You can browse quickly every Simurion's pages by pressing left/right.
-You can change your team more easily by swaping Simurions.
-The stats of the Simurion are displayed on its page.
-A new description has been added for each Simurion.

I've just finished a big part of the game that takes place in a snowy mountain called Kholony Peak. This is a barren area with a lot exotic gameplays where the player have to find its way to a hidden relic.

Kholony Peak is constantly subjected to a snowstorm. It will be difficult to explore, if your body temperature drops below 32 ° you will lose consciousness.

Keep an eye on your body temperature.


This region is very large and to keep track of your progress you'll need some landmark flags. For instance, you can put a flag in front of a cave you want to explore later, or the opposite, mark the places you already visited.

You can put a flag where you want on each map.

Pretty hard to progress in these caves but maybe there's a way to counter this...

Ice cubes puzzle : These blocks slide forward when you push them.

Stay cool to find the solution of these puzzles.


This is all for now, I hope you'll like the updates.

I'll put another smaller one later this month. As for the next demo, it's not ready yet, but it will be released this year. (The demo #3 is still a meaty one if you want to try the game => It's there.)

Hello everyone, it's been a long time since the last update.
But no worries, I'm still working hard on the project, almost everyday day for at least 1 hour.

This feature was locked for a long time, and I needed to work on a lot of different stuff to finish it but now I can proudly say that the system is in! The next demo will feature the new Aptitude Menu.

Quick reminder, the Aptitudes are talents the player can aquire which help him to explore the world even more.
Remember the bushes that blocked your way in the first demos? Now you can dispatch them!

Each time the player will finish a side quest or achieve something important like wining at a battle arena or rebuild a number of Simurions... he will gain Adventure Points (AP). Aptitudes can be learned with AP.

The best thing is that the player can learn Aptitudes in any order he wants! So be prepared to explore the world like no other one.

-You will be able to slash these bushes with Cut.
-Scotopia will make dark caves a little brighter.
-Rock Sweep will get rid of the rocks.
-You could find random items in the wild using Survival.
-By learning Treasure Hunter, you'll gain extra AP for each treasure you find.

-Finally,Quest Memory will be an useful reminder for every side quests.

Most of the side quests are about helping villagers but I decided to make some more action oriented quests too. When the player starts to become a well known robot master, the Police will ask for his help. You will have to go to the scene of the crime, locate the culprit and finally face his Simurion in a battle.

Five Police quests will be available through the game.


Learning the backstory piece by piece

The main story of the game is told by set pieces but there is also optional story telling elements the player can find by exploring the world.

I wanted the players to have a deep feeling of discovery so I choose to let them search for information about the Pemikian history by themselves.

There are several computer wastes from the Pemikian era located in the world. If the player discover one of them, he may find a memory card with some information on it. Like a page of an history book, piece by piece, the player could bring all of the information together and learn the secret of the Pemikian history.

With the time, the game had a lot of differents key items and I wanted to make it easy to access all of them. So the idea of a "Tools Menu" came to me.

You can access the Tools Menu anytime by pressing SHIFT.

The next demo aka "Demo #3" will be released in the middle of december this year.
It will feature twice the amount of content the previous demo had. Playtime wise it should take at least 12 hours to finish.

The sad part is that previous save fils won't work for this demo. Sorry... (Since a lot of stuff changing for the balancing). I'd try to make the next demos compatible with the demo #3 though.

Anyway, see you soon for the release! :)

Recently I added a new system in the game. It will allow players to fuse 2 accessories together to create a newer and stronger one.

For instance, if you mix 2 of the same accessory which protects 50% against a status, you’ll end up with a new item preventing this status completly.

Another case will be to fuse two totally different piece of accessories and combine their effects.

The Soldering System will be available in the next demo coming later this year.

For a long time I didn't write any update but I wanted to change this for 2016.
So here we go, first project update!

The project is doing well, I'm working at least one hour per day but I try to do 2 or 3 hours each day. It's by working regularly that you can accomplish long projects such as an RPG. I'm kind of proud to see how I'm sticking with the project for 7 years and never really lost motivation since then.


I finally arrived at the stage where the first Simurions we found in the game are going to upgrade! It was one of the long term goal I set from the start of the project. From time to time it felt like I wouldn't make it. But I eventually did... after all these years, haha! :D

Since the demo #2 I worked a lot on the polish for what comes next. Before that, there was not a lot of events or story. But I wanted to add some to drive the adventure a little more. I think this can be a good motivation for some players.
I tried to keep the "lonely exploration feel" I wanted for this project so integrating these stories was not easy. I had to find the good timing for adding them without doing too much. Exploration aptitudes are the next big thing I'll tackle soon.
What will the player will choose first? To cut bushes? Clear the rocky roads? Or see in the dark caves? Even for me it'll be a surprise.

I want to reward the players for exploring and I plan to add a lot of story in these optionnal paths. The player will discover more about the past by finding pieces of informations such as documents and old video logs of the Pemikians. But the players will also be rewarded with gameplay items, rare hardware, new Simurions, short cuts and useful NPC advices.

The demo was finished a little while ago but I wanted to be sure there was not major bug in it before sharing it to you, guys.

The next demo update was supposed to be available in october but I couldn't finish what I wanted but I put a deadline for this december. I want to for the begining of the month but at the very least it will be before 2016!

Here's some screenshots from the next demo : 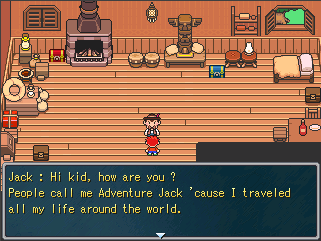 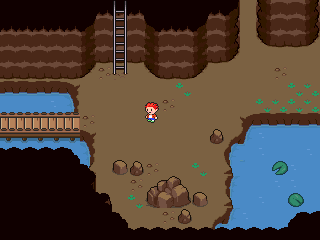 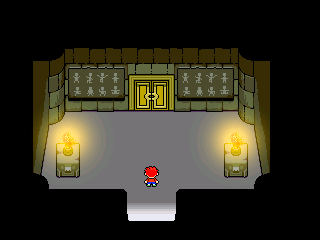