ANIMATED BACKGROUNDS THE OLD WAY, IN RPGMAKER2003 (ADVOCATE AND STEAM)

How to Create Animated Panoramas the old way rpgmaker2003

I originally submitted this answer for a thread back in 2018 and was trying to look for it the other day and had trouble finding it. So I decided to submit my answer as a Tutorial to RMN, so it'll be easier to find in the future. This is a very simple tutorial that outlines a very simple way of creating moving animated backgrounds in both versions of rpgmaker2003 (rpgmaker advocate's and steam).

However, this is just one of the many methods folks can use to create animated moving pictures in rpgmaker2003. Nowadays people use the new picture-in-battle-feature that Cherry created for steam's rpgmaker2003, which can be quite taxing on certain machines. So I thought I'd post this old method for those who are interested in the more traditional method for posterity sake.

EDIT: This is not how I made Steamed Hams. Steamed Hams uses an entirely different method, which I'll get to updating eventually:
----------

author=puubutt
I've seen similar topics, but none that want exactly what i want.

Is there a way to import a video/gif as a background for a map?
Or a still image to move as a background?(Nikki example of what I mean: https://youtu.be/7PSu-WxJR0o?t=42 )

Now there's actually two ways to do this. The one described in the guide above where you use cherry's new picture-in-battle, and hedge's spritesheet creator to create an animated sprite sheet, that will play inside your game.


…Or the second method as seen in Yume Nikki and other RM2000/2003 - a bunch of old rpgmaker games have done this in the past and it's a really really cool feature I wish more people knew about, because you can do some really crazy things with it (like Secret of Mana, final battle mana beast stuff). But you're basically using panoramas, to animate the background of your game. Depending on what you plan to animate for your background - this one's a bit more difficult and labour intensive - shorter animated gifs here are preferred because it means less work, but I'll show you how you can do this here in a sec, through a couple of examples:

EDIT:Now a couple of games already use this method:

One is PepsiOtaku's Everlasting Journey:

Another is Kirin's Origin:

And another is the unreleased FF5:B@BB:

But the method is mostly the same:
-Take a movie or animated gif
-resize it to 320x240 (or smaller)
-export the gif as a series of individual pictures/animated frames.(png or bmps)
-Use infranView (or another image program) to covert those series of images to 256 colors so it's compatible with RM2000/RM2003.

Now, once you have your images together, here's how to turn those frames into an animated background in RM2000/RM2003:

1.Create a parallel process event (preferably in the corner or a place where it can easily be found so you can adjust it later to edit): 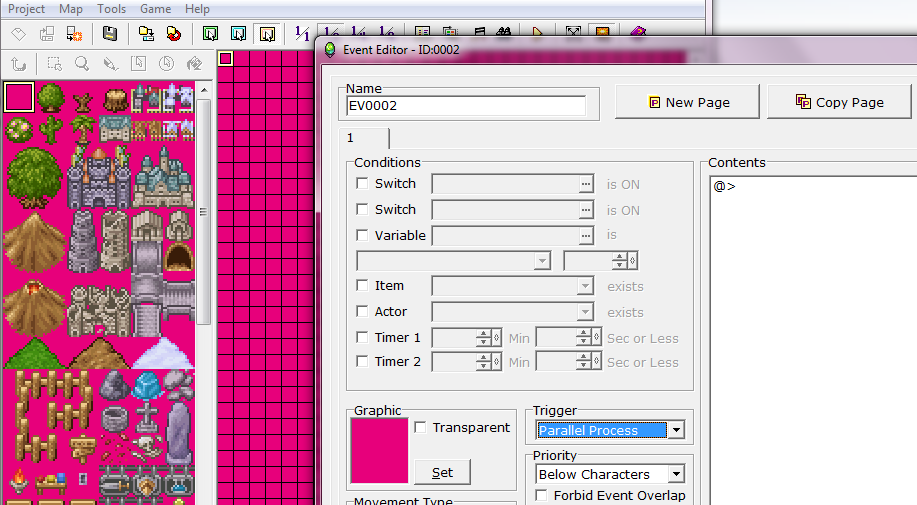 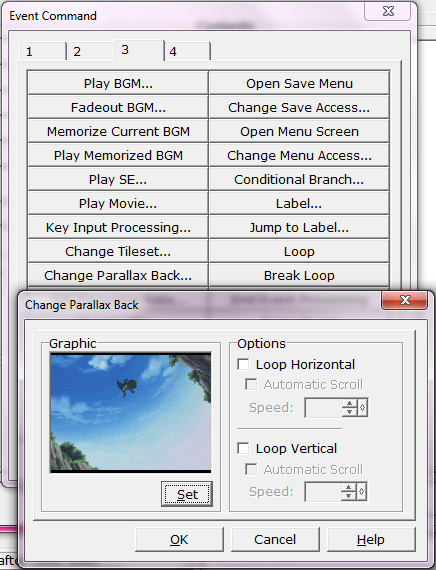 3.Select the first frame of your animated background. 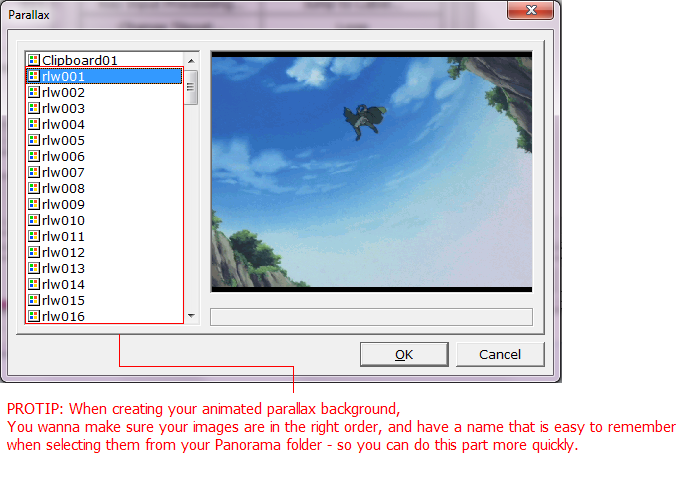 4.(Optional/Recommended) - you'll want to test and preview how this background will scroll in RM2000/RM2003:
If your animated background has a lot of frames, this part will be very difficult to edit later on,
so make sure you've decided how you want it to scroll before adding more frames. 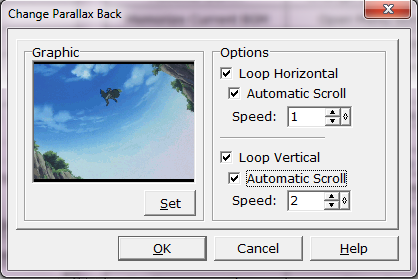 5.Once you have your first frame down, Copy and Paste the first frame, in sets of 10,
so you can easily edit in the next numbered sequence: 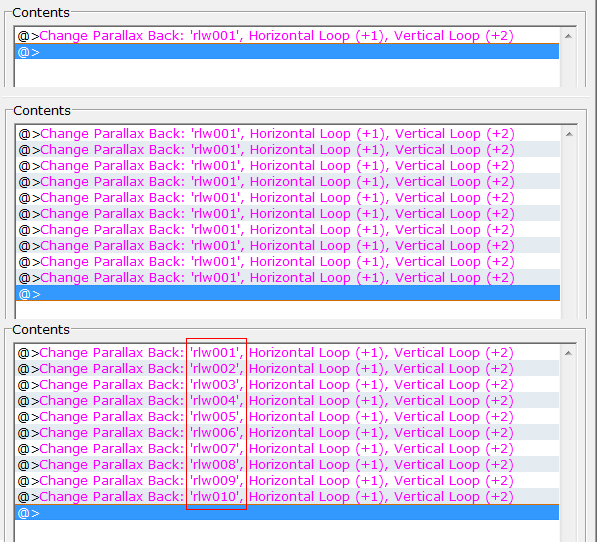 6. Once you finished inserting all your frames, Create/Copy and Paste a Wait 0.0 command between each frame.
(for slower animations instead of 0.0, add 1)

7. And you're done - (here's the animated background without the scroll):

(here's the animated background with the scroll):

EDIT: if you have anymore questions let me know.
This particular example is 94frames and 12MB - but I need to convert down all the frames to .xyz to help with compression.
Stuff like that, you'll want to take into consideration when creating animated backgrounds for RM2000/RM2003