[Request][Scripter] Need a script important to my game

I need an RGSS3 script for my game, Shrouded in Dark.

About the game
In it you play an aspiring Dark Lord, and you travel from island to island conquering every one of them in plots typical to RPGs: kidnap the princess, steal ancient artifacts, summon monsters to do your bidding, et cetera et cetera.

Aside from all this there's the typical RPG dungeoneering and battles. For the battle system, I am planning to adjust the main battle system of RMVX Ace, and turn it into a system that's based off skills only. You equip skills outside of battle, and have to select them based on the circumstances, the enemies you're facing, et cetera. I'm hoping to have the battles be of a tactical nature as opposed to just spamming attack.
Another feature of the battle system is combo-ing: By having characters use certain skills, they can combine their attacks and turn it into a skill used by the both of them. Another way is if character B has, say, a fire element buff provided by character A, then character B's normal Slash attack would turn into a Fire Slash.

The 'job'
I would like a script to house the fundaments of this combo system. I've already found a combo script from Vlue, which is a great script, but I believe it's bugged or something as I can't for the life of me get it to work, even in a clean RMVXAce project. Aside from that, it doesn't quite house everything I need.

So, what should the script do? The following:
For 'regular' combos, in which two skills used at the same enemy trigger a combo
- It should be able to identify skills as part of a combo, and which skill is a result of it (Vlue did this through notes in the skill's database entry)
- It should be able to 'notice' that those two skills are being used, and then override them with the resulting combo skill

For 'boost' combos, in which one character gives a buff to the other, changing the skill
For boost combos, I think the best way to do this is by using states. So:
- It should be able to identify skills as being boostable by a state
- It should be able to 'notice' that a skill is trying to be used while a character is in said state, and then override the skill with the boosted version

That's essentially the gist of it, I believe! If I suddenly remind something very important, I'll be sure to change the topic, or if someone's working on it already, contact them ASAP, but I believe this is it.

What's in it for you?
Let me be honest with you. I'm sure you've heard this before, but I'm just a poor college student, and if you were to make me this one script free of charge, I would be very thankful. HOWEVER, I am fully aware that you're spending time on my project, so I feel it's only fair that a payment of some sorts is negotiable.

If you have any questions or are interested in taking this, feel free to reply on this topic or PM me, and thank you very much!

08/09/2014 09:22 PM
As the topic implies, I'm kinda curious about how you guys make bossfights interesting. I'm pretty sure most of you will agree that a game in which every boss is just a heavy hitter damage sponge does not substitute fun. I'd like to hear how people make their bosses fun!

As for me, there's been an idea I've been juggling with. I've started making a game about a week ago, and one of the things I want to do is make the gameplay varied. Think lots of small plot-related minigames, just to try and break the threat of a mundane "talk to people in village and go into a dungeon with random encounters"-cycle.
One of the ideas I had for this were bossfight intermissions. Essentially, as you're busy fighting a typical RPG boss turn based, once you hit, for example, an HP threshold or a certain amount of turns, the battle would end prematurely, and players would be able to enter a short small minigame. With quick thinking, they can win this, allowing the players to gain extra benefits, or get a penalty with losses, after which the fight would resume.

For example. The first boss in the game is a giant bird that is perched on a nest at the top of a mountain. After a certain amount of turns, the battle will end, and the bird will fly up and flap its wings heavily, charging up for a wind attack. At this point, the player will get the opportunity to shoot at the bird's wings with his magic scepter. Doing so will not only negate the wind attack, but will cause the bird to crash down to the ground and deal extra damage.

Later on, as you get more characters, there would possibly be special intermissions for bossfights depending of the characters in your party at that time. For example, an AI-controlled tank could be digitally sent haywire by a hacker character, or a marksman character could break down one of its turrets.

08/09/2014 03:01 PM
Hey there! I've been trying to make a minigame in RPGMaker VX Ace. It's a simple game: you play a bird flying down a mountain, and you have to avoid obstacles that come your way. You can only move the bird left and right; not up and down.

Now, here's the thing. I was very much used to programming the RM2K-way, so there might be tons of easier ways to accomplish this, but at the moment, here's what I've done.

To restrict the movement of the player, I set up a bunch of events at same level priority to block the player off, like so: 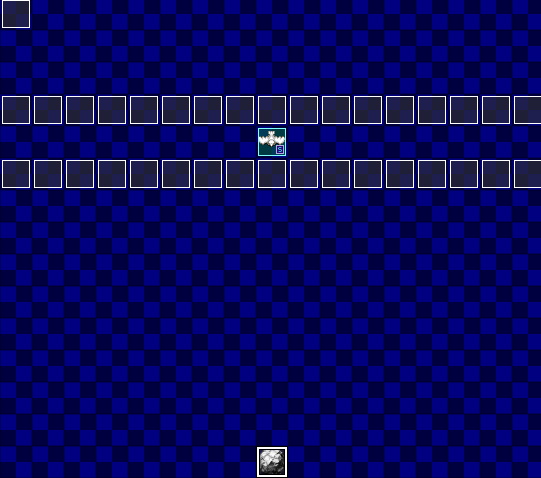 The first thing that happens is the event in the corner sets the health variable for the player, then has the player character go in stepping animation and direction fix (so it's a strafing bird who continuously flaps its wings) then it activates a self switch to the next phase of the game which is currently unwritten.

My current problem lies with the obstacle: the boulder. Here's the event page: 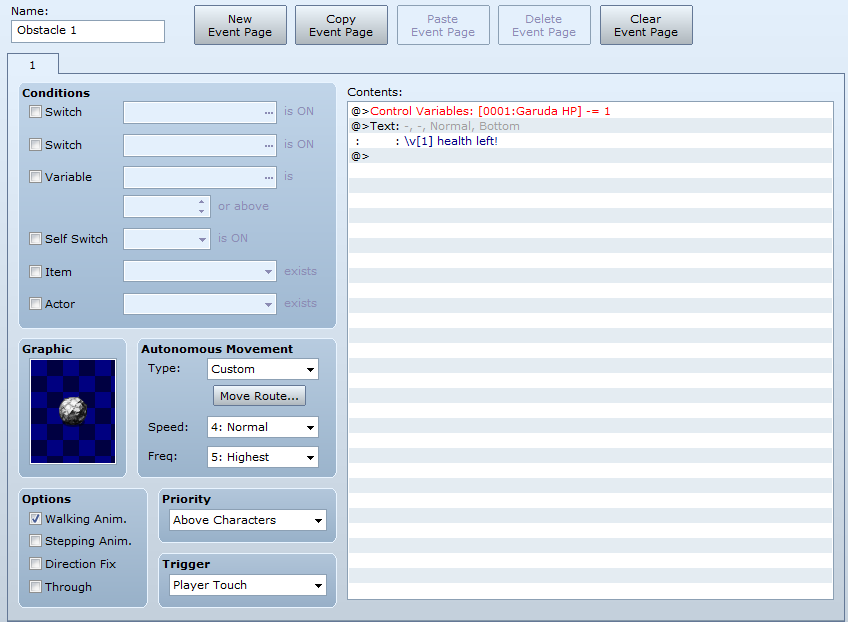 (The move route is simply a looping Move Up and Through should be checked)
So basically, I want the boulder to deduce HP when it gets in contact with the player.
However, it's just... not doing it? If it's moving, it won't interact with the player at all, and the only time I can get it to actually deduce HP, I have to position myself above the boulder after it has already stood still. Am I doing something wrong here?

07/11/2013 03:29 PM
Hey, I'm Ralph. I used to be active in Gamingw about 7 years ago, maybe even earlier, and recently had a burst of nostalgia so I decided to see what's actually left of the RPGMaker community... And am actually pleasantly surprised to be very honest.
Pages: 1