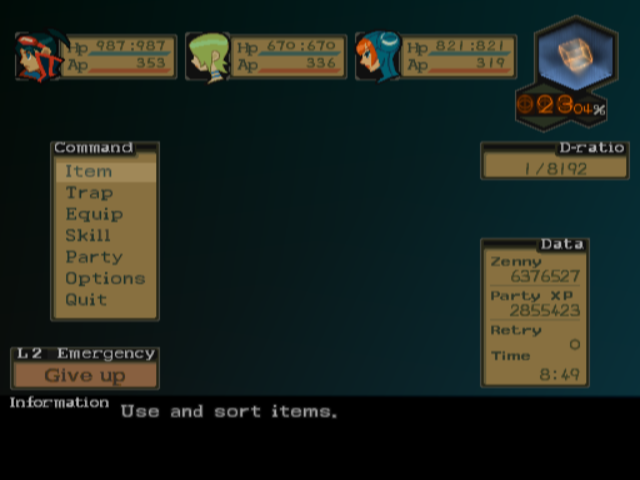 ...this. I dunno, maybe it's just me, but there is something beautiful about that game-time. I mean, I recognize that a lot of numbers displayed here are hacked, or are otherwise the product of cheat-codes. I freely admit that. The game-time, though? Not hacked.
Red_Nova

Close
07/24/2016 08:45 AM
So, i finished Act IV and somehow it manages to be the weakest and the most interesting one so far. Basically, it takes control out of player's hand. It's pretty certain, that you miss every second scene as you usually have to choose between two. Some of these are kind of boring. For example Ezra searching for sounds. I don't want to restart it before the final act is released and i'm so tempted.
Ratty524

I tried out that new dungeon thing they released and it's interesting. 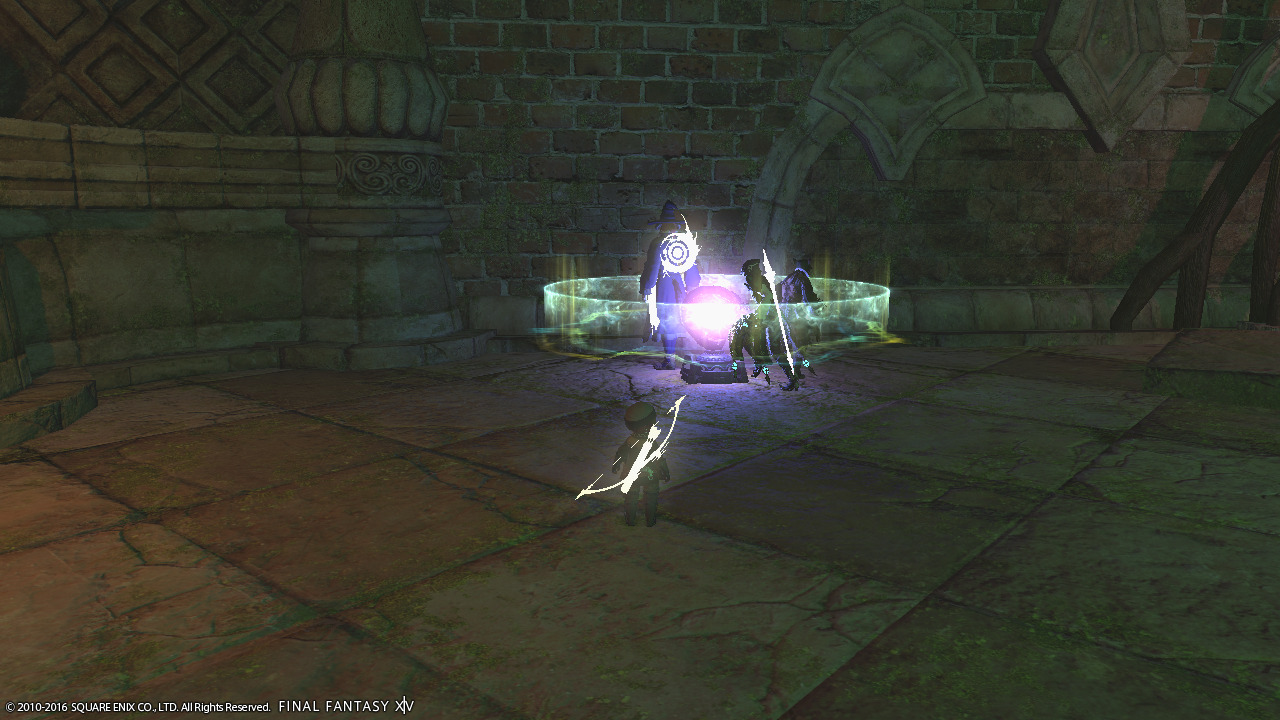 This glowing bow is too big for me.
XoeisCooI

Ratty524
Renewed my sub to Final Fantasy XIV. I'm mostly just crafting things and trying to get to level 50.

One of these days I'll get an income and join my RMN friends in Eorzea... One day.

I started playing Ys VI: The Ark of Napishtim today. It's been years and years since I played it- it was the first Ys I ever played or heard of, back when I was about 12 or 13 or some shit. I'm enjoying it so far- the PC version this time instead of the PS2 copy I used to own.

I remember it having voice acting, but I guess that's not in the PC release? My only real complaint so far (cause let's be honest, not having what was certainly bad anime voice acting is a bonus) is that the button mapping is weird even after customizing it. The jump and cancel button are together, as well as attack and confirm, so I can't really get it on a normal A/B layout as I'd like to, something always has to remain "backwards".

Other than that I'm still chemically addicted to playing Civ V. I'll stop once Civ VI comes out and I upgrade my addiction.
Cap_H

So far my team has become:
Ivan the Ivysaur lvl 24
Frien the Fearow lvl 25
Chloe the Clefable lvl 23
Paera the Meowth lvl 22
Deinni the Diglet lvl 24

Going to catch a horsea as the water pokemon, hopefully.

This made the early game surprisingly easy, though. I had two Pokemon by the first gym, being Bulbasaur and Spearow. Bulbasaur obviously wrecked it hard. Caught a clefairy on mt moon and trained it. Taught it mega kick and mega punch over pound and growl or something. Once she got to around lvl 20, I took a look at what moves she learned as a clefairy, saw they were near worthless or too far off, and evolved her into a clefable which proceeded to wipe the floor with Misty. Didn't even use Ivan.
Third gym was a breeze with diglet and Ivan, and now I'm headed towards the fourth gym.
Dudesoft Close
08/01/2016 08:41 PM
And so it's done. My run of Dark Souls 3 as a sorcerer is complete. All required and optional bosses have been beaten with just my sorcerer. Praise the Sun for Crystal Soul Spear, the most OP sorcery in the game.

This whole run was an experience. Not only was a sorcerer COMPLETELY different in gameplay from my usual melee build (don't type that smartass retort I KNOW you started on. Of course there were going to be differences in playstyles, but there were differences in areas I wasn't expecting), but it pretty much took me back to my first experience with the series in general. I had to relearn every single boss and every single basic gameplay mechanic all over again. Even more so in the later half of the game when enemies did so much damage that I could die in one or two hits.

All in all, the run made me a better player not just for Dark Souls, but for games in general. I learned to analyze enemy patterns quicker and more accurately, to take my character to the lab and test out every single configuration in an attempt to maximize damage output, and gained more mental endurance and patience when it comes to longer, more drawn out boss fights.


So I think I'll move on to Fire Emblem Revelation. Right after I french kiss this electric outlet.
Liberty

Lumine LeBlanc, an aspiring nudist who liked the heat, decided to explore the rimworlds and landed in a fairly temperate zone. She and her warg, Tahoe, slowly built a small base where they were soon joined by a plethora of other pets - two turkeys, a rat, a cassowary and a tortoise. Despite her terrible ability when it came to healing Lumine made sure to lend a helping hand to many escape pods that crashed near-by, saving well over 10 people through her efforts.

Eventually she met Klara, a young woman being chased by pirates, and saved her. Together they made the base grow despite the many challenges they had to face. The heatstroke that nearly killed Klara, the fire that burned down half the base and took out all the power and stored food, the killer warg pack that hunted the valley for three days and various pirate raids. Together they faced it all.

Then came the warning - Klara's father had crashed nearby and was in need of help. They sent out a rescue party, but on the way back they ran into a herd of mankilling elephants. Klara was badly injured but managed to make it back alive, Lumi bringing up the rear. Home safe, behind closed doors, they tended to Klara's father and Klara. Unfortunately the door was breached when the Anais, the pet turkey, ran outside. This allowed one of the killer elephants inside the house, dealing Lumi a killing blow as she tried to protect her friend.

The elephant was chased outside by an enraged Tahoe, who went berserk and started killing everything he could find. The pet rat. The pet turkey. The pet cassowary. Klara's father, who was finally feeling well enough to get out of bed. Finally, Klara herself.

Wounded badly the enraged warg lay down and slowly bled to death, mere feet from his beloved masters body.


This game is a lot of fun but damn, does it hurt when you lose your people. :<
Marrend

Close
08/02/2016 01:20 PM
Played a bit of Child of Light last night, which I got from the July sale. Not particularly happy about needing to have UPlay installed. I dunno, maybe it's just me, but, this idea of needing another Steam-like service to play a Steam-game just rubs me the wrong way. I mean, I have an account, thanks to Might and Magic 10 - Legacy, but... yeah.

Anyway, I'm definitely after the part where Aurora can fly. I'm still tending to use the d-pad for her, but, I might use the analog eventually. I'm definitely loving how the characters tend to speak in rhyming couplets, and how the entire game is framed like a fairy tale. I'm definitely okay with this Grandia-esque combat engine, though, I'm still a little awkward in regards to the wisp (Sorry, I forget it's name at the moment).
RyaReisender

+'s:
-> The Digivolution/De-Digivolution mechanic means you can easily spend hours trying to get the perfect Digimon.

-'s:
-> The Digivolution/De-Digivolution mechanic means you can easily spend hours trying to get the perfect Digimon.
Marrend

Close
08/06/2016 05:10 PM
In reference to this post I was highly tempted to start a game of Suikoden 3. I didn't expect PCX2 to be able to read PS1 memory cards that were made via ePSXe. In theory, this means I should be able to get what few bonuses occur from transferring the Suikoden 2 save into Suikoden 3. If it turns out that it doesn't work, I can't be too angry about it. The bonuses, as I recall, weren't that great.

author=Deltree
No Man's Sky is out in a few short hours. See y'all in about 3 weeks when I emerge with Rasputin-like facial hair.

This is me on Wednesday, after being paid.
Liberty

In most RPGs, it's always like "Oh here, have a quest! Go on now, solve it, and I'll see you next town! tah tah, run along you little scamp!"

In The Wicther it's like "Oh, you want quests? I'LL GIVE YOU QUESTS! TAKE IT YOU WHORE-HNNNG"

I'm like tripping over plot threads over here. I walk over to one place to get a thing - Oh you must go to this gnome to find this special book... When, in fact, some random guy was just selling it! He was only supposed to have one of the books I needed, but he ended up having both, so woo for me? Only sometimes the dialogue feels like I missed something somewhere.

One thing, though - I'm trying to remain as Witchery as possible. Ignoring as much of the politics as I can, and just focusing on my mission, and killin monsters!

Another issue is money. The Dragon-Quest Casino-Hog in me wants to just sit around and gamble all day to get money, but damn it's hard to win against the best guys. I walked into Vizima with more money than I thought I could spend and I am now practically penniless after all those books I had to buy.
Pages: first prev 325326327328329330331332333334335 next last
Forums :: Videogames
Back to Top