@Creation: Everything looks superb! Great art style there. Do you use some sort of textures?

Thanks for the praise, I appreciate it. I use semi transparent texture on top of the armoire in the little room and on top of the book case.

Creation, that entire chipset is custom made by you? Really? That's pretty excellent, considering :o

Well, I use the basic RPG Maker VX RTP as a model and try to redraw it in my own way so to speak.

Someone's little brick house does seem like an odd place for a boxing ring, but otherwise I have nothing negative to say about that screenie.
Except that maybe the posters are a little out of perspective, like they're flat while the wall is sloped Zelda-style.

It's supposed to be the bedroom of Slimongo, the protagonist of the game, so it's not really a house but more like a shabby room. I want the room to improve as the player earns more money from fights, as a representation of his ''status'' so to speak.

Except that maybe the posters are a little out of perspective, like they're flat while the wall is sloped Zelda-style.

I like the look overall, but the tiles are just too different in quality and presentation. Layout is very good though, and the tile choice too, just that the quality doesn't match up.

Yes, I see what you mean. The thing is, the tileset elements were all drawn at different times. I eventually became better at it which explains the discrepancy between the various elements. I didn't want to bother redrawing the older elements (like say the barrels) out of laziness but I guess I'll have no choice to do so.

If you have some time, I'd be great what if you could point out what in your opinion should be changed (poorly drawn elements) so that I can have a better consistency in quality.

A lot of the tiles look fuzzy (in a bad way) especially the brick. Some of the object like the bookshelf are fuzzy and pixelated on the top. The door on the left room looks clean and stands out way too much.

Any suggestions for the door? I've actualy messed with it quite a bit but can't seem to reach a satisfying result.

The brick is blurry because I had to resize it in order to make it fit in a ''tile'' so to speak. It didn't strike me as being very blurry though.

I'll fix the top of the bookcase, good call.

the color and shading of the ropes stick out like a sore thumb compared to the rest of the tiles.

You're talking about the ring, right? Alright, I'll what I can do.

Dizzy... aren't the flour bags and the boxes (the bar?) slightly falling forwards (actually the 2 barrels on the right of the door are the only elements that seem to be standing straight up)? Also the door of the room looks like its going into the wall at the top. That ring definitely isn't too great (color, lining and how did those curves get there with the strings ?).


Edit : for the "falling forward, maybe it's the floor tiles, would be better horizontal ?

Re-edit : That's a pretty thick wall on the right, but, why not?

I don't get this impression from the floor, the bags or the crates. But come to think about it, maybe you're right. I didn't strike me as being obvious when I first did the whole thing, but I do kind of get this impression when I look at it in greater detail.

The door is going into the wall, I was told it was sticking out too much so I tried to integrate it into the wall so to speak.

Could you be more precise about the ring. I don't really know how I could improve it based on your comment. It'd be great if you could provide some ideas/suggestions so that I can make the change because I don't really know what to do. I don't personally see a problem with the ropes being slightly curved like this. Are you saying that you think it would look better if they were straight?

the rope on the far side of the ring looks odd. It looks like it should go straight across instead of bow in a u shape or be placed beyond the edge of the ring instead of where it is ie. moving the horizontal lines 1 square "north" so that you see wood floor between the ropes, not ring.

Ah yeah, ok, I see. You mean move up the poles higher in the corners so that the ropes show the floor in between them as opposed to showing the ring, correct?

There's something else I'd appreciate input about.

I want to use a screen before each duel just like in ''Punchout'' for the nes:

I came up with this but I'm not happy with it. I think it could certainly be improved. I'd be interested in your ideas/suggestions for things to change, thank you: 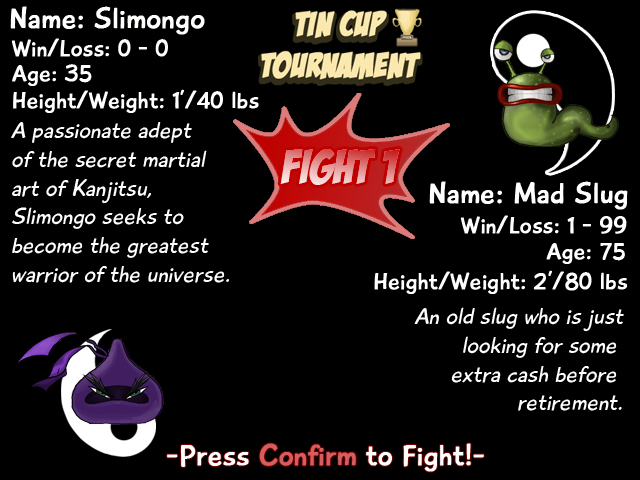 I also changed the look of Slimongo, it looked bad before:

But, seriously, is it ok like this or does it suck so much that you don't even know where to begin?

Close
08/20/2011 12:48 AM
If you guys remember I showed some screenshots of a remake of an old abandoned game idea I had. Well I just found some of the screens from the original Dragon's Tear, thought that I would share them with you and give you guys another look at the new one. BTW about the unfinished screenshot.. Does the waterfall work or should I just change the water tile to match it better? Close
08/20/2011 04:25 PM
Quite beautiful, but I still think the golden lining around the street makes it look like it's above ground level(!).
Dyhalto

author=Creation
But, seriously, is it ok like this or does it suck so much that you don't even know where to begin?


Looks fine to me. I'd also leave Slimongo where he is.
Seeing it in action would help me too. Sound effects, music, etc.
Creation

Close
08/21/2011 06:45 PM
Thanks for the feedback. I'll actually try what Chana suggested about centering things a bit more but will keep the same layout for the characters.

I just tried a new title screen today. I'd like to know if there are things you don't like about it so that I can change it. If you have ideas or suggestions of your own, I'm all ears. 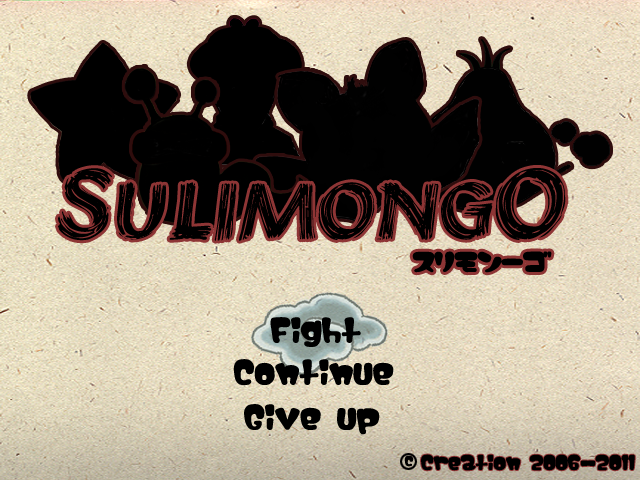 I tried going for the same kind of background as Okami. There are some white pixels that I've just noticed but those will be easy to fix.

I'm not looking for an out of this world title screen, just something good enough which gives a good impression.

The cloud flies in from the left and highlights your current selection. It's also going to be animated.
chana

An example of one of the levels in the game.

Fight against 2 monsters. I plan to replace that trippy default battle bg with something custom, but I don't know. I'm kind of pressed for time.

A monster casting a spell.
chana

Close
08/21/2011 08:44 PM
Looks nice, I really like the third map!
" I plan to replace that trippy default battle bg with something custom", please do, even if it's not custom, to get rid of that horrible gigantic nipple!
Doom_Bloomer I'm working on a game right now called Echoes of Fantasy (Working Title). Since I haven't put together a blog yet, I won't go into too many details here.

I designed all the graphics in the game from scratch with an old-school RPG feel in mind. I'd love to hear what you guys think of the way they look.

Combat in dungeon maps is non-random, and monsters are represented by these blobby creatures boogieing around the map.

Close
08/22/2011 01:13 AM
All of the art looks decent on its own but the mapping looks a little too spaced out. (I looked at your other screenshots on the main site btw) Is there a path? Does the player know where to go? Idk some more detail and direction would be nice for the mapping.

And like chaos said its a little hard to see the HP and MP numbers due to their large facesets, though I find this a problem in default RMXP battle interfaces in general.

edit: okay hold that thought that is not quite like chaos suggested.
dethmetal

Close
08/22/2011 01:37 AM
Those monsters are beautiful. They're custom? Personally if get rid of the generic anime portraits and do them in the same dark style as the monsters, bit that's just me...
Lucidstillness

I'm still wondering what to do about the combat portraits, as some of the characters are so bright they make the numbers hard to decipher. I think I'll probably put bars where the stats are to make things a bit clearer. I rather like how the heads go slightly above the bar, but that's a personal thing.

Map design is something I'm also still playing with, as I realized early on that the presence of on screen monsters that chase the heroes requires some room to maneuver (otherwise it's really cheap for the player). I'll be adding a lot more detail to the maps as time goes on, which brings me to another subject:

In this screenshot, do you think the top of the cave looks good? I know a lot of RPGs have a kind of 'trim' around the top, but I'd like to know if you think it looks good without it, since it's a fair bit of extra work at this point.

Thanks for your comment about the monsters dethmetal. I thought about doing the characters in the same style, but decided against it for two reasons. The first is that the characters have to emote a fair bit during the dialogue scenes, and anime art is just a lot easier to draw for that:

The second is that I wanted to make a kind of tribute to older RPGs like Cosmic Fantasy or Lunar. Hopefully the clashing styles will evoke those old games.