Close
03/15/2014 12:06 AM
You know, I questioned curtains on the railings like that myself. I had them there originally, but removed them from my version as I didn't think they fit.

It is an interesting ballroom variation though (with a second floor. Without the second floor it's probably even easier I'd reckon). Though I am curious if I may ask...why are the pillars set up like so? And why are there flower patches (the red ones, not the blue ones. The blue ones are perfectly fine)?? And the random barrel?

I DO like how that second floor is done though, especially by the windows.

(If I may ask, what are the dimensions on that room too??)
SnowOwl

Close
03/15/2014 12:19 AM
Didn't find any other flowerpatches in pots so I got lazy. Easily fixed, but meh.
Barrel is there because barrel wants to be there.
What's wrong with the pillars?
Dimensions are 19x23 sprites.
Roach714

Close
03/15/2014 03:58 AM
Xenomic I know you're trying to get advice and all but I think at this point you may want to take a little time, let some of what people said sink in and just work on some stuff solo.

The real way to get better at mapping is PRACTICE. It's not a single trick or tip that will do it for you, clearly.

Spend a few sessions just making more maps.. A lot of them. (Not for your game, more like case studies)
Take some time and STUDY commercial games and how they design rooms and dungeons

Try other tilesets. Dont upload every modification of your maps to the screenshot topic. If you have to ask advice on every detail when mapping, you aren't ready.

I'm glad you're trying to improve but this is getting over the top.
Yes we are here to help, but I feel like I'm going to overdose on that chipset very
soon.

Itaju- Absolutely love it..SO much style. I'd love to see more. Are these 100% custom assets?
Xenomic

Close
03/15/2014 04:35 AM
Ehh...I find it more worthwhile to do that while actively making progress on the game itself. I know there's no single trick or tip, and I know it's all practice.

Most of what I see from commercial games are pretty tiny from what I've seen already. Doesn't seem to give enough room for exploration IMO. But that's me. Then again, some maps are just really hard to judge what size they should be, while others aren't. That, and their encounter rates are generally a lot higher than what I've set for mine. Sure, I COULD lower it, but a high encounter rate despite the maps is just...off-putting to me. Probably why I've started not liking the first four FF games (and TAY...). >_>;;

Heh...not ready. Mapping just isn't my forte. Even with 5-6 years of doing it. Some things some people can do much better than others, and then there are things others can't do at all. That's why I'm always looking for mappers to help with it. *shrugs*
Alichains Close
03/15/2014 06:02 AM
Looks fine on my end. Though I'm not sure what that room is meant to be (the main one). The kitchen I'm assuming, judging by everything there? Or is it one of them homes that merges like the kitchen/living room into one? Or is it something I'm missing entirely? o.o??
GamingMitchell03232013
0 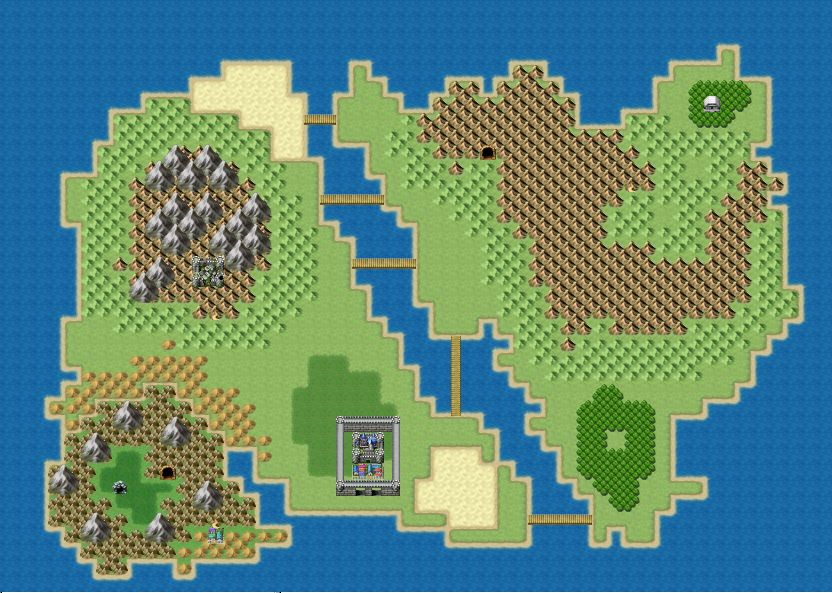 The continent of Isis. The demo (of which I will actually finish!) will take place here. Clockwise, the locations are..

Some of the bridges will be removed, and I may put a guard post of sorts at the foot the the Pass Caves.
Alichains

@Mitchell how do you reach the town at the bottom of the map?
GamingMitchell03232013
0

author=Alichains
@Mitchell how do you reach the town at the bottom of the map?

That town won't have any importance until Chapter 3 (Each 'chapter' is planned to be about 3-4 hours long).
Alichains

Here's a screenshot of a forest dungeon I just mapped. Close
03/16/2014 05:03 AM
Pretty standard map I have to say. If it's meant to be simplistic, then this works nicely. If you're aiming for something more elaborate, it would need a lot more done with it for details. But as it stands, it's not bad for simplicity.


Alright guys, I'm going to post these last few screenshots and then not show anymore for the mansion at all (until the library/basement...which won't be for a while since there's still many rooms left to do for the main mansion). So hold onto your breeches eh? 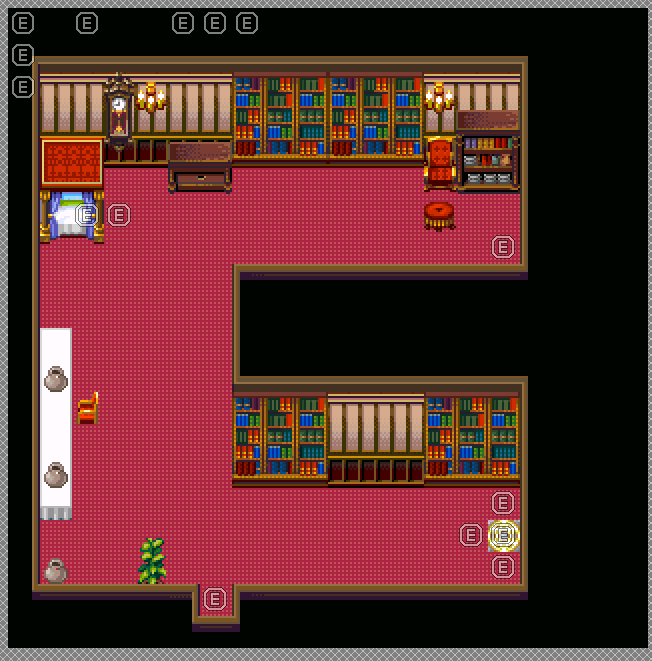 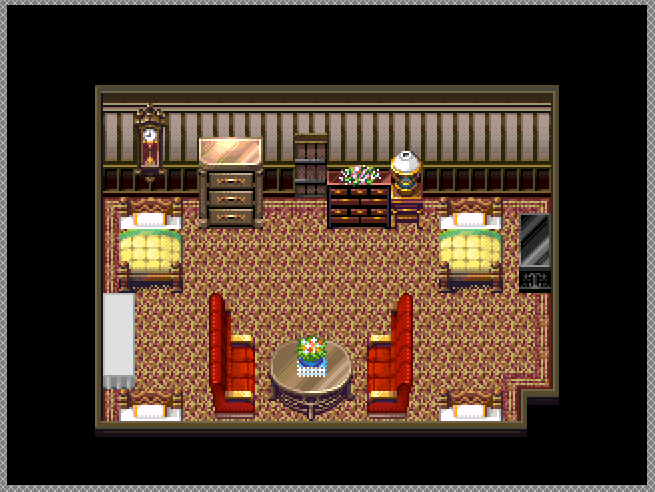 Weapon Gallery (kudos to anyone who knows what is what): 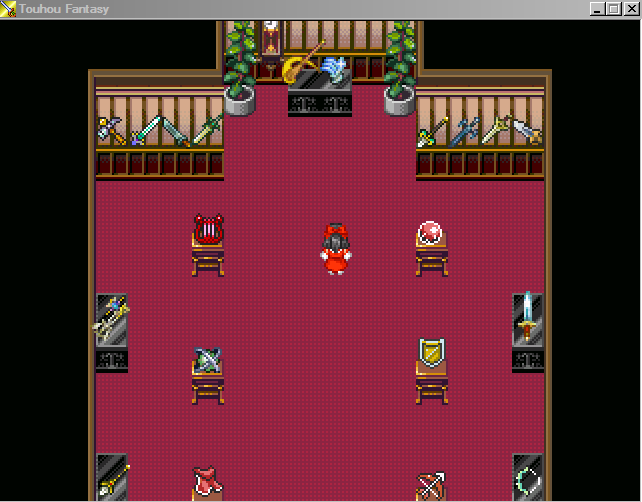 While I was crafting the game's first dungeon inspiration struck me for an inventive sort of puzzle. The chest has already appeared and been opened in the screenshot below. Props if you can guess what you have to do to make it appear.
I'm not a huge fan of must have meta-knowledge so, if you defeat the Skelebro guard (which I already did) on the left side, he reveals the clue to solving it. It's mostly just for funsies.

It was made with simple event code with the aid of some variables and conditional branches. I think that the map looks a bit basic and could use a bit of variety here and there, but overall, but if it indeed was meant to look like a NES controller, and pretty basic, I think you did a good job,

If it wasn't on purpose, then I think that you should add a bit more variety in the walls and such too (As in making it less... square, try to move a segment of the wall down so it has a more natural shape),

I love the idea though from what I've read.


In the meantime, as an RMXP developer I have a picture too laying around which I would like some advice on:

author=Binturong
Patchy's room is a bit bare. I'd expect her research to be strewn about. Make it a bit more lived in.
Bedroom #2 is VERY nice.
The weapon room is good. I would put a path down the middle, though.

Yeah, I didn't really have much to toss into her room oddly enough. I'd have to edit the tileset JUST for her room alone to add in some books and stuff here and there, hopefully without making it so that I don't have to actually HAVE an extra chipset and still have the current one be usable. Not too sure what else to throw in her room myself.

A path eh? Hmm...perhaps just a carpet down the center would work better than in the entire room??

author=Skyrockerable
Makes me remind of a NES controller,

I think that the map looks a bit basic and could use a bit of variety here and there, but overall, but if it indeed was meant to look like a NES controller, and pretty basic, I think you did a good job,

If it was intentional, I'd go out on a limb and guess the solution might be a certain code named after a certain company...

author=Xenomic
Yeah, I didn't really have much to toss into her room oddly enough. I'd have to edit the tileset JUST for her room alone to add in some books and stuff here and there, hopefully without making it so that I don't have to actually HAVE an extra chipset and still have the current one be usable. Not too sure what else to throw in her room myself.

Sometimes some rooms/maps just need their own edited version of a chipset to work in context to the universe - to make it fit the characters who inhabit it. It's a pain, yeah, and can amount to a bit of filesize increase if you do it too often, but sometimes it's worth it to add that extra something something.
Alichains

Close
03/16/2014 08:07 PM
Aye. I'm just removing stuff that I'm not going to use on the current chipset to make room for stuff on this chipset. In fact, by removing a lot of junk that I don't need, it seems like I could make another type of bedroom alone just from this, which is good. The bedrooms so far all look much alike! They need some variety.

I'm still at a loss as to what all other rooms I can put in here. I have 4 bedrooms, 2 bathrooms, a ballroom, a weapon gallery/museum, the lobby, the kitchen, the dining hall, the living room, and a storage room. That's just for the first floor alone so far, and I got the back hallway that leads out back to still do (with 5 rooms there too!). And then I have the second floor East and West wings to deal with (there were 4 hallways, but they're going to be merged into 2 hallways). I'm running out of good idea for this place! The library is on the first floor too, but that's a completely separate area technically so...@_@;;
Travio