4 reviews
Save to Dropbox
This game is a tribute to the old school program RPG Maker 2000 that I used to live off of back in the day.

In this quest you play as a Dark Elf named Dagree. He's a simple treasure hunter who is normally feared by humans. For some reason, the citizens of Vitality Island aren't scared of him except for the naughty Royal Family. Along the way you can make choices in the game that determine what side character you'll end up with.

The story itself is easy to follow and doesn't really need to be serious.
Most of the characters that you talk to probably rode on the short bus.

Notes for the adventure; Other main characters come into the play as well. If you join up with the wizard he'll have his own problems that come into light during the quest for you. If you kill the wizard you get a thief to replace the loss. If you don't talk to everyone, future quests won't become available and you'll miss out on items, weapons, or hidden bosses. There are also abilities that your characters can learn (pushing stones, raiding houses). I'm going to guess that the game time runs at about 10 hours long or so.

2013 VERSION;
Even though I'm working on Epic Elf 2, I had to return to this project simply because I enjoy playing around with it. I think that it's finally time to move on. If you enjoyed Epic Elf, this version will entertain you as well!
I fixed up the story, added more mini quests, enemies, jokes, bosses, blood, creepy stuff and secret items. Enjoy! Dagree gets a happy ending in this one!

So the "Fixed Version" of Epic Elf is done!

I just submitted the (hopefully) final version of Epic Elf.
So, it's a little easier and a few extra things were added, like a side quest in Limbo and an extra cut scene with Daploma. You will be able to use your old save file incase you were wondering.
So I hope that helps those who had a hard time with the game, and if there are still minor glitches . . . . damn it!
Alright! You can now enter the shops! Now I gotta delay the game to finish up the other towns.

The mountains got a minor facelift from the earlier version.

"If you're gonna devour humans, do it at the table!" Is what my Mama told me!

Yes. This game was based off a true story. Really! No lies!

Were you able to get this to work?
I tried this out on my Computer running Windows 7 and was able to get the past the title screen: 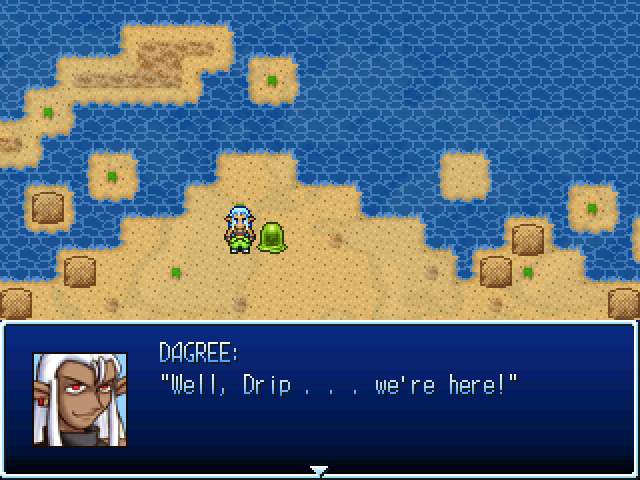 I also have the font fix available. I could look into this tomorrow if you want - I just need someone to troubleshoot these compatibility issues with. But yeah, it'd be cool to add this to the archive.

Close
01/10/2019 11:28 PM
it'd be cool if the game were unencrypted so we could update it to the currentmost rm2k version for compatibility and better playback, also the link to the font fix is dead and i have no idea how to font fix an encrypted rm2k game

Close
01/27/2017 03:36 PM
I know the dev probably doesn't check here anymore but does anyone know how to beat the slumbering squid? When battle begins it goes to sleep and one of the characters says that the squid wont wake up if we use scrolls or magic but whatever i do the squid still attacks even if i defend instead of doing anything. I can't progress because now that character stops me from walking further on the world map until that quest is finished but as it is it's impossible to win.
Caladium

It's kinda sad though you cannot get the achievements you'd missed before the island changed. Like how was I supposed to know about the frog stomping achievement or the fact that there even were achievements in the game? Also, I'm kinda curious what's behind the statue on the map with the achievement pillars? Does it open after all the pillars have been activated? Furthermore, I couldn't figure out where to find and fight the "dark version" of Dagree's father and his minions. Finally, I never found out how to enter the cave that used to be the frozen one but apparently melted after the cataclysm. I suspect that's somehow related to which permanent companion you chose before the kidnapping event, right? I've chosen Borgan and beaten the game with him, but even though I do have a save right before the chosing thing, I'm kinda reluctant/lazy to do it all over again with the other two. So, the question is: how does choosing different companions affect the game plot-wise? Is it really worth replaying two times? Does it ineeed "change the fate of the island" like it says in the description or is it nothing more than some different dialogues?

Close
01/28/2015 04:02 AM
I joined this site because of this fine game, slight problem though, the link for the font fix leads to a fle not found page, could you reup the fon't fix file, thanks.
I'm looking forward to this fine game.
spirit_young Close
01/20/2015 01:34 PM
I found a bug and I don't know if it was pointed out in the 10+ pages of comments or not but I'm gonna post it just to be sure. When you use challenge scrolls they use the specific background of the spot you are standing on for the combat and some spits cause the game to crash because it can't find the required background. Example: because I'm lazy I wanted to use a couple of scrolls in front of my room at the inn and the game crashed because it couldn't find the Brickcave (i think) background. To avoid all you have to do is don't be lazy and use the scrolls someplace else, the world map for example. Great game btw, can't wait to finish it and get to #2
coolopotomus
0

Edit: I realized it was just the general rpg 2000 font patch. Nevermind!
spirit_young

Close
11/03/2014 12:50 AM
When I first read the dialogue I thought this was going to be a crappy game, but after the first part I couldn't put it down. I mean you eliminated a basic need, gold and replaced it with bartering to obtain items which made it so much more interesting, unique and challenging! Then I start actually getting into the story which builds a little slow, but it hilarious and laugh a minute and just reminds me of old fashioned fantasy spoofs of the quality of Monty Python! I haven't beaten it yet, but I have to say I love the the fact every time I think the game's story is going to get lame it gets BETTER! =O I love everything about this game and I tempted to add it as a my all time favorite indie game of all time. @u@ You, sir, are a genius!
Pages: first 1234567891011 next last