To complete the process, players can bring their Lifestream Cores to Lulu's Statuary and trade them to her, where she will bring her statues of various famous Final Fantasy series characters to life. The character unlocked will permanently become a part of the player's party, at level 1 with all of their possible abilities unlocked right away. 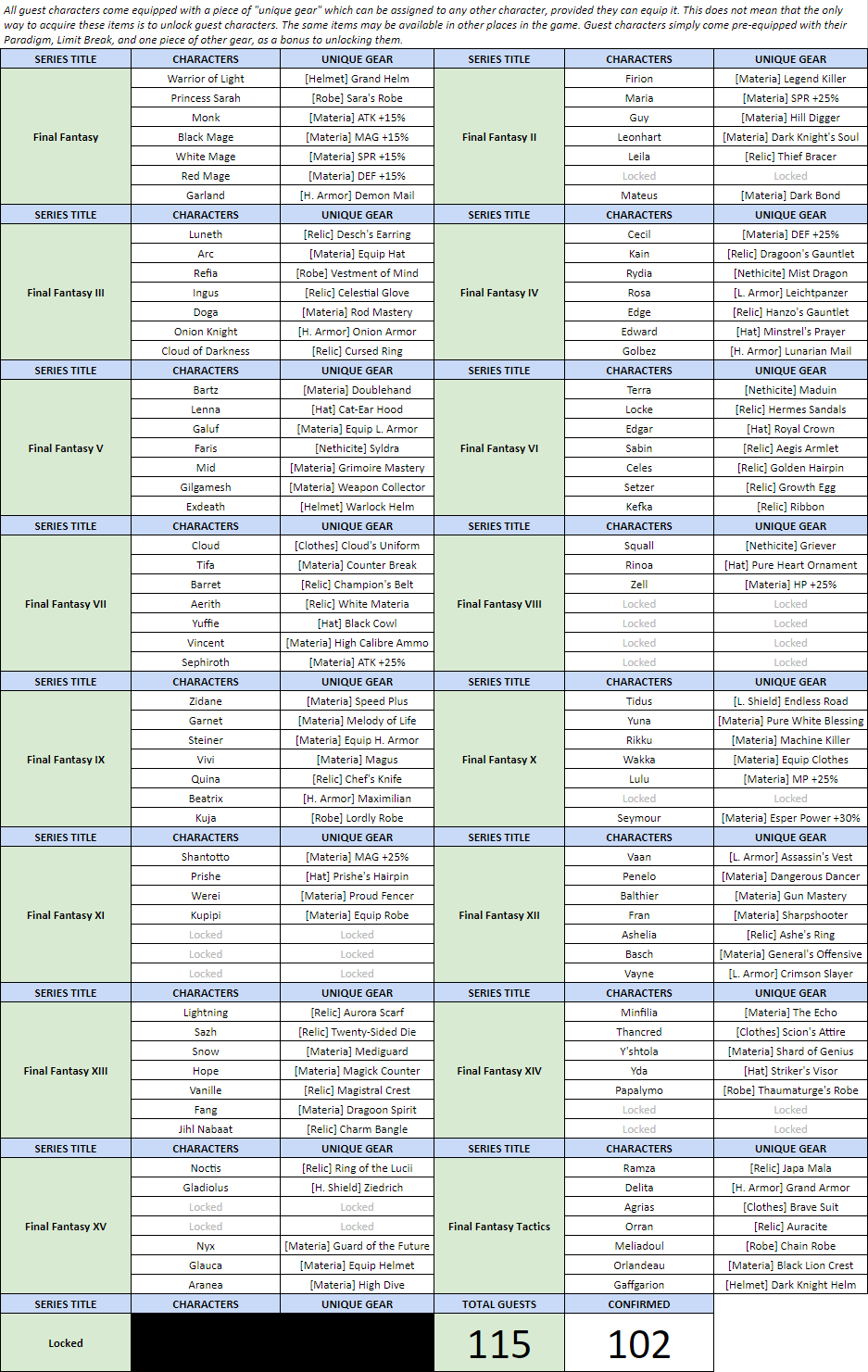 Who else would you like to see added? Leave your comments below!

Yang and Rydia from FFIV (hard for me to choose between them)
Galuf from FFV
General Leo from FFVI
Vincent from FFVII
Quistis from FFVIII
Amarant from FFIX
Olan (Orran?) Durai from FFT
MetaSieg
0

And then to finish it off with some other good guys:

author=Jeroen_Sol
Can villains be unlockable?

Anyone can. We do have a spriter. :D
WCouillard

author=WCouillard
The full unlockable cast of FF4 has now been revealed. Originally, I had three more characters to show today, but I held back and decided to keep it strictly to FF4.

I like the selections, minus Edward. He was always so useless (in battle). I'd like to see how you're gonna make him a worthwhile character.
WCouillard

author=Zadok83
I like the selections, minus Edward. He was always so useless (in battle). I'd like to see how you're gonna make him a worthwhile character.

You just watch me. :D

Edward has many singing abilities to buff the party. While he sings, he cannot act for the duration of the song, however, he gains a substantial Spirit increase while singing, allowing him to pretty much tank magic attacks while buffing the party. That in itself already makes him more useful than his original FF4 counterpart.

His Limit Break is also what will make him a truly viable choice, since most buffs don't go higher than 50% of any particular stat. Edward's raises them by 100% for a very brief period, giving the player a round to really unleash huge damage.

Some brief notes about the other FF4 characters...

Kain: Passively applied with Dragonheart, making his Jump attack twice as strong. Reeve also gets this ability, but must cast it on himself first. His Limit Break deals high physical damage and buffs himself for a few turns, making any Jump attacks critical hits while he has this buff.

Rydia: All Esperkind summons damage or heal for 25% more HP. Has exclusive Mist Dragon summon ability among a few others, that even Ellie does not gain access to.

Edge: Has inherently high Evasion, Speed and Accuracy, allowing him to dodge attacks often, and deal critical hits frequently. Also has a selection of fixed damage abilities for enemies with incredible defenses.

Rosa: One of the few characters with the ability to restore the party's MP. Her version of Blessing applies Refresh on all party members (except herself), and she has access to high level White Magick healing abilities, as well as individual status curing spells. In addition, she inherently deals higher damage to flying enemies with her bow.
WCouillard

Close
02/02/2017 10:49 PM
FF3 characters Arc, Ingus and Refia have been revealed, bringing the total number of announced unlockable guests to 23/93! Hard to believe there's still 70 other characters to show, but there are!
Omnion
0

Close
02/10/2017 09:40 AM
Hey WCouillard, I had this idea come to mind for maybe a future update after you release the game? How about you make it more interesting by allowing only CERTAIN guest characters fight special bosses from Final Fantasy's past? Basically I'm imagining a Arena trapped in a Space-Time Dimension where the host challenges Heroes to many battles where each Guest Character or certain Character Groups where they face their past dangers (Certain Monster Bosses & Villains), and once all bosses from each Universe are defeated the Host himself will challenge you to a final duel with no restrictions.

The Host will turn out to be Chronodia from Final Fantasy I - Remake. Since Chronodia is one of few villains able to cross space & time besides Chaos & Gilgamesh.

What is Chronodia's story for challenging the Heroes from space & time? That will be up to you. :)

The way the fights will be structured is by Game Universe, and you will receive a prize for each Arena Challenge. For example FFI Arena Challenge would be where you face a series of bosses from FFI, and Chaos would be it's final boss for that arena challenge. I'm thinking the way you access the Space-Time Dimension will be under Extras Option in the Title Screen or simply a new dungeon opening up in new game plus next time you play right at the beginning of the game. Also as a bonus for defeating all Arena Challenges for each game universe, there is a optional Arena challenge where you face villains/monsters from the SaGa series, but you don't have to beat it to fight Chronodia as it is simply a bonus.

Also to clarify on a point...ALL Arena Challenges (That means I-XV Space Time Arenas) except SaGa have to be defeated before facing Chronodia. XI, XIV, and XV are a bit problematic though due to lack of sprites, so that could be optional as well besides SaGa.

I hope you take this idea under consideration because something like this would be hell of a lot fun to do!
WCouillard

Close
02/10/2017 01:56 PM
This is already pretty much how the Arrowny Gallery operates, except the player is. OT forced to use any character they do not want to. :)

Chronodia may end up appearing somewhere in the game, but nothing in decided there yet.
Kaliesto

My suggestions are probably not ideal, and these job classes are just what I think fits them. I would enjoy to know what you think of each character and what job classes would better fit them. Adieu.
WCouillard

Close
06/06/2017 07:37 PM
Y'shtola and Lightning join the game as unlockable guests, and I've expanded the number of unlocks, as well. Unlock #7 for each FF game will be included with the final release of the game, but access to them will be restricted until all other unlockable guests have been obtained by the player. All characters in the Unlock #7 spaces will be unlocked at one time, together.
Amaterasu