Stop me if you've heard of something like this before

Players will meet eight people, and one of them is an assassin in disguise! The object of the puzzle is to figure out which one of the people is the assassin before he/she kills off the others. I wish to note that failure does not mean needing to re-do the puzzle from scratch. It means facing a boss.

Anyway, the gameplay loop involved is that players will talk to a spirit of some kind. It will produce a list of suspects. Making a selection will indicate that you think that person is the assassin, and summarily dies. If you are wrong, the assassin kills a person at random, and you'll have to try again. However, there are a few things you can do before talking to the spirit. Such as speaking to each person that's still alive. Some folks won't have anything special to say, but there's some that can help you with your goal.


This person can delve into a person's heart, and tell you if that person has good intentions.


This person doesn't have too many morals, and will kill anyone you point him/her towards.


This person has a 50% chance of evading any action that targets him/her. This ability is neither removed after it is successful, nor if it fails. This evasion does not come into play if this person is chosen via the spirit.


This person has an 100% chance to evade death. This ability becomes no longer in play after it is used. This evasion does not come into play if this person is chosen via the spirit.


The theory might sound familiar to some. However, the big question in my mind is how this is going to actually work? At the moment, I'm figuring the best way to do it is to a set of eight game-variables to keep track of which event_id is which role, and make damn sure there's only one copy of the unique roles. Perhaps an array can help do that? Maybe I could link the game-variables to the spirit's choice-command so that the already-dead would produce a "nope, try again" deal? I'm thinking commentary would depend on role, and I could use my Myriad Cypher experience generating those.

So, uh, yeah, that's the extent of my grand plan for this temple. Don't lynch meeeee! *hides*

Close
06/16/2016 12:03 AM
I've played a few. The first one I played in was an FF8-based one, and I recall a Death Note based one. The most recent one I participated in was probably the Breath of Fire-based one?

*Edit: Then there was this attempt on my part to run one. Kinda-sorta worked?
pianotm

Close
06/16/2016 02:16 PM
The one I was planning on was a Magic: The Gathering one. The absolutely horrid plan was that there would be be multicolored factions (ie: a Red/Green character would count towards the win condition of a Green/Blue/Black character, because they are both Green), rather than go the easy route, and do mono-colored factions. I'm crazy like that, though. 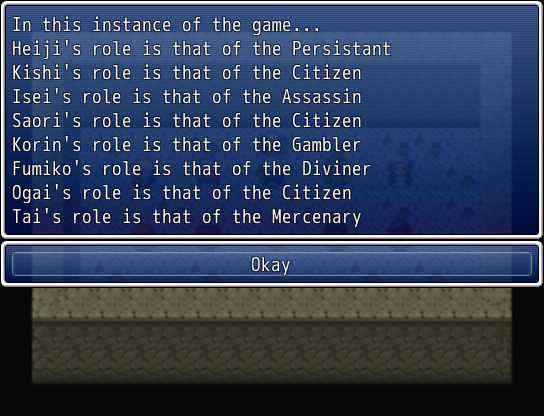 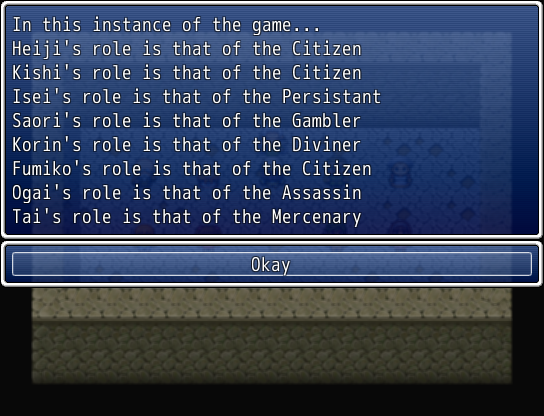 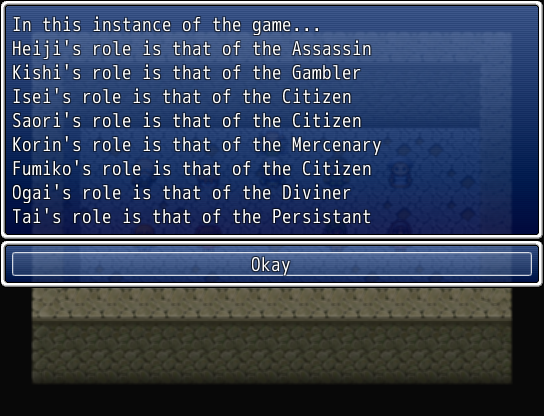 Close
06/16/2016 08:03 PM
It looks like the assassin can randomly roll somebody who's already dead. Otherwise, things are looking amazingly sweet.

Hey, followers/subscribers! Have a go with the alpha test! I know, I know, it needs the VX Ace RTP, but it 's the quickest way to get it up, and I'm just so goddamn tired right now. Speaking of...

Close
06/17/2016 03:39 PM
Today, on Marrend Does Stuff, he re-configs various "floating" functions into a Mafia module, tears his hear out trying to figure out how to make everything work all over again, and maybe, juuuuuust maybe, might be exactly where he was before, gameplay wise.

Though, to be honest, I re-included the part where the Host flat out tells players what roles everybody has for debugging purposes: to make extra-sure assigning roles (and how they are updated) is done right. I haven't done much with actually lynching people or giving the Diviner and/or Mercenary targets as of yet. That's a headache for the NEXT episode! Stay tuned on this thread! But first, a word from our sponsors!
Marrend

Close
06/17/2016 08:32 PM
I probably should do a bit more playtesting on this, but, from what playtesting I have done, the system looks, waaaaaiiiiittt fooooor iiiiittt...

I've re-uploaded the locker-file with the updates to the system, and would generally appreciate some comments/feedback!

Though, I do have to note that the graphics can be a little wonky in regards to updating graphics of a DECEASED character. Particularly in regards to the mafia winning. I'm not really sure what I can do about that, but, at least I'm aware of it's existence.
Pages: 1