Legrand Legacy is a tactical turn-based RPG that takes you on a journey through Legrand, a chaotic world torn apart by civil war and threatened by an otherworldly invasion. You play as Finn, the reluctant leader of a band of unlikely heroes, who soon discovers that the true peril to their universe lies within themselves.

Waking up with no memory of his past, Finn is sold as a "Blood of the Arena" in the City of Slavers, Tel Harran. While trapped in the Colosseum to fight for his life, he ends up mortally wounding the arena's champion beast with one fatal blow. Little does he know that such an unexpected turn of event decidedly marks the beginning of his journey in fulfilling the prophecy. 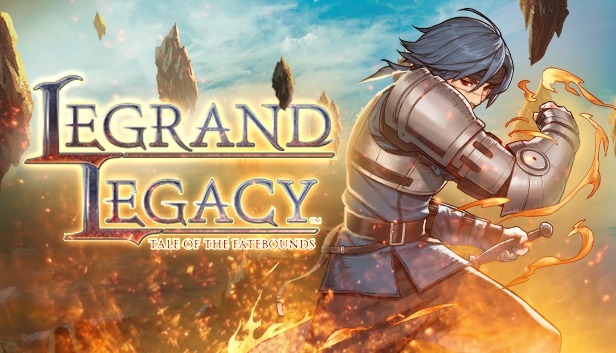 Thanks to the feedback and recommendations from you guys, we’ve finished our complete rewrite of the games script, fixed a few bugs, and straightened out other minor issues, and today… the motherlode finally hits our Steam store.

That’s right, the all shiny, all new and improved Legrand Legacy v2.0 drops today! If you’re wondering what this means for your gaming experience, read on.

MAJOR CHANGES TO COMBAT AND BATTLE SYSTEM
We have replaced the old battle system completely and re-coded from the ground up. This massive update includes:

a. Significant improvements to combat camera and new impact effects
You will see that camera movements during battles have been upgraded with dynamic angles and we’ve added fancy impact effects to make your heroes feel all the more badass.

b. Difficulty selection
We included a difficulty selection to cater to your needs. Want to enjoy the story but think the combat is too hard? Play on “easy” and breeze through your adventure. Up for a hardcore challenge and want to put your gaming skills to the ultimate test? Play on “hard!”

c. ACT mode option (easy or off/automatic)
After a lot of feedback, we discovered that some of you don't like to have to press the ACT with every turn, so we’ve added the option to make the ACT dial easier OR to turn off the ACT completely and make it automatic instead.

d. Updated enemy AI
While updating the code of our combat system, we discovered that some of the enemy AI did not work as intended. We have fixed those problems.

e. Rebalanced most of the combat
After fixing the enemy AI, implementing a new difficulty selection, and the automatic ACT, we have also updated the combat balance to fit the new AI. Enemies are smart but not too smart!

GRAPHICAL IMPROVEMENTS
We have modified the old shaders so the new shaders now enable normal maps, which means more refined and prettier details on the 3D model textures.

COMPLETION OF SCRIPT REWRITE AND EXTENDED ENDING
Following our announcement about our attempt to rewrite the script, this update completes the revised writing. You can now enjoy Legrand Legacy’s newly rewritten and polished script in its entirety. Plus, we have also extended the ending with additional cutscenes to clarify the conclusion of our heroes’ story.

SKIPPABLE CUTSCENES
During cutscenes, you can now press the cancel button and then the confirm button to skip the current cutscene entirely.

TACTICAL WAR QUICK RETRY
Now when you lose a tactical war, there will be a prompt so you can try it again.

OTHER MINOR BUGS
As always, we have also fixed other minor bugs.

Finally, we thank you for being supportive and vocal of the improvements you wanted to see! We may be a small studio, but we hope that we have been able to respond to your feedback quickly enough. We can’t wait to hear what you think about this new update, so don’t forget to LEAVE YOUR COMMENTS after you’ve tried the new and improved Legrand Legacy v2.0.

That said, I thought I could help you improve your short description a little?

Legrand Legacy is the incarnation apotheosis of the classic JRPG with a modern stylized graphics, a unique battle system, and a deeply twisted story.

Saying it is "THE INCARNATION" of the classic JRPG does not really mean anything because it's just an incarnation of the classic JRPG, one of hundreds of such incarnations on this website. The other changes are minor grammatical tweaks. "Apotheosis" is a pretty flashy and bragadocious word, so if you wanted to be a little more modest, you might consider this instead:

Legrand Legacy is the archetypal classic JRPG with modern stylized graphics, a unique battle system, and a deeply twisted story.

That's somewhat more modest than the first correction option I provided, and still gets the point across.

I hope that was helpful. Dictionary links for the curious: